In the 16th century, the Italian diplomat and political theorist Niccolò Machiavelli wrote ‘The Prince’. It shocked people because it detailed ruthless tactics for gaining absolute power and its abandonment of conventional morality. Machiavelli was seen by some as an agent of the devil (who, because of Machiavelli, has sometimes been referred to as ‘Old Nick’).

‘Hardball’, which was first published in 1988 and then revised and updated in 1999, is like a modern version of ‘The Prince’. The author, Chris Matthews, has spent a quarter of a century in and around American politics, from being the right-hand man of Speaker of the House Tip O'Neill to the host of NBC's highest rated cable talk show ‘Hardball’. His book of that name is the closest thing that contemporary politics has to a rulebook; O’Neill (who died in 1994) called it “the best in the business”. ‘The Wall Street Journal’ described ‘Hardball’ as “a thoroughly entertaining must-read textbook about modern-day American politics and how it's played”. However, just as ‘The Prince’ was relevant outside of Italy, so Matthews’ ‘rules’ have been and are being followed on both sides of the pond.

I’ll give some examples of Matthews’ advice:-

Chapter 5 (‘Keep Your Enemies in Front of You’)
President Lyndon Johnson was known to say: "Better to have your enemies inside the tent pissing out than outside the tent pissing in". I think that’s standard practice for many leaders in democracies. Once you have your enemies working with you, they can't bad mouth you and their interests collide with yours. On the other hand, it was easier for Michael Heseltine to plunge the dagger into Margaret Thatcher (sadly only metaphorically) in 1990 because he hadn’t been in her government for nearly five years.

Chapter 7: Leave No Shot Unanswered
Labour’s biggest mistake in recent times was in spending four months in 2010 electing a new leader. While that was happening, the Tory lie that the global credit crunch of 2008 was “all Labour’s fault” went largely unanswered and was then perceived by many as ‘a truth’. A strong rebuttal is needed every time that a shot is fired by your opponents. Matthews’ advice is to respond to attacks immediately and not to let anyone get away with anything.

Chapter 10: Hang A Lantern on Your Problem
Matthews says that when you put your problems right up on the table, it is a sign of strength and it allows people to move past them much more easily. It would appear that Ed Miliband took his advice when he faced up to the media portrayal of him as ‘weird’ and joked about any resemblance he might bear to ‘Wallace and Gromit’ characters.

Chapter 13: The Reputation of Power
Another tactic politicians use is ‘lowbagging’, where they set low expectations and then surpass them. This has been George Osborne’s modus operandi; now that the economy is showing signs of growth after flatlining for three years because he snuffed out the previous recovery, we’re all supposed to hail his great success.

I’m sure David Cameron’s very own Machiavelli, Lynton Crosby, will have digested Matthews’ book from cover to cover. He may well have told Cameron that you can make sure your name always goes first in a newspaper photo caption if you stand on the far left of the photographer’s shot, as the photo editor’s caption reads from there. In short, ‘Hardball’ is a book about how politics is played by one who knows the game. And ‘a game’ is all that politics appears to be for people like Matthews, who in his time wrote speeches for President Jimmy Carter and worked for four Democrats in Congress but then voted for George W. Bush in 2000. 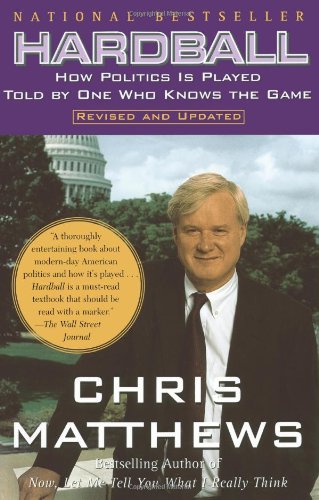