Mariana Mazzucato and Michael Jacobs wrote in ‘The Guardian’ on 19 July:-

“Theresa May’s one substantive campaign speech before taking office as PM was striking in highlighting the need to address the nation’s economic dysfunctions: inequality, low productivity, excessive executive pay and the lack of an industrial policy in Britain. These are not problems caused by the EU or immigration, but by longstanding structural issues with the economy left untackled by previous governments.

In his final statements as chancellor, George Osborne made the extraordinary claim that the economy is in a strong condition to face the uncertainties of Brexit. The opposite is the case. Fiscal austerity – even with interest rates at rock bottom – has drained demand. Business investment has not returned to its pre-financial crisis trajectory – reflected in low productivity and a record trade deficit. And companies are obsessed with short-term returns, not long-term investment and innovation. While executive pay has soared, in the eight years since the crisis, real wages have suffered their sharpest decline since records began.”

Mariana is an economist and professor at Sussex University. Michael is also a professor and he has held various roles concerning the environment, climate change and the political economy of capitalism. They have edited a book entitled ‘Rethinking Capitalism’, which includes chapters written by Nobel prizewinner Joseph Stiglitz, the Bank of England’s Andy Haldane and many others. Will Hutton describes the book as “an invaluable contribution to the challenging tasks ahead”, adding that “from the rise of populist protest movements across the West, the hard realities of stagnating real wages and entrenched inequality, it is plain that modern capitalism is not working”.

In this book some of the world’s leading economists propose new ways of thinking about capitalism. The first chapters explain why governments are not households. Perhaps the most obvious thought is that while an individual household experiencing hard times can either tighten its belt or find ways to increase its income, if a government cuts its spending it has a knock-on effect which shrinks the whole economy. The orthodox prescription of ‘fiscal austerity’ - cutting public spending to try to reduce public deficits and debt - has not restored Western economies to health. In other words, austerity doesn’t work. It’s as stupid as asking an unemployed man to pay off his debts.

Western capitalism came close to collapsing in 2007–2008, and has still not recovered. What made the financial crisis such a shock - in two senses - was not simply that few economists had predicted its coming. It was that over the previous decade the mainstream view was that policy-making had essentially solved the fundamental problem of the business cycle: major depressions, it was believed, should now be a thing of the past. I’m sure we all recall how Gordon Brown was ridiculed for promising “no return to boom and bust”. Yet even during the pre-crash period when economic growth was strong, living standards for the majority of households in developed countries barely rose.

The financial crisis exposed the uncomfortable truth that much of the apparently benign growth which had occurred in the previous decade did not in fact represent a sustainable expansion of productive capacity and national income. Rather, it reflected an unprecedented increase in household and corporate debt. Not only did the financial crash lead to the deepest and longest recession in modern history, nearly a decade later, few advanced economies have returned to anything like a normal or stable condition, and growth prospects remain deeply uncertain. Inequality between the richest groups and the rest of society has now grown to levels not seen since the nineteenth century.

Gillian Tett of ‘The Financial Times’ writes: "We badly need fresh thinking in the world of economic policy making today – and this book offers a plethora of provocative ideas. It tackles numerous sacred cows in a lively and provocative manner and challenges our assumptions. It is thus a very valuable and welcome contribution to the current debate about why so many Western economies have performed poorly since the great crisis.” 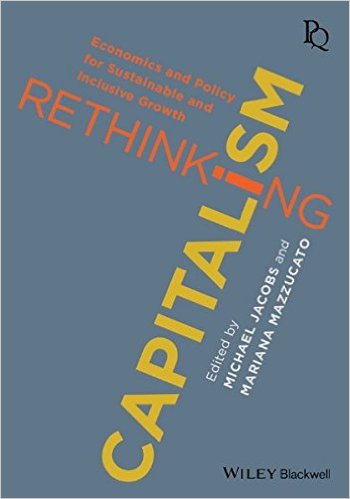 The dry title alone seems intended to restrict the likely readership to academics, when the content should interest almost every UK resident affected by the brexit referendum.

A different approach to "First World" problems is taken in a book entitled "The Price of Prosperity" (Why rich nations fall and how to renew them) by Todd Buchholz.  Harper 387pp £18.99.  in which the expression "an ageing population" is said to disguise the steady collapse of any economy propped up by immigrants.