So we now have the start of the 2017 general election campaign and the buzz phrases have started to come out.

It is likely to be a very dirty campaign with lots of negative Buzz Phrases from all parties and many of these will be designed to stick in the minds of voters to sway them.

We will have the MP's doing the rounds of the TV News shows giving their daily talking points which will be littered the phases given to them by party election coordinators.

Here is the first one I have heard today:

"It is likely to be a very dirty campaign"

Indeed it is, because the principle at stake is not the usual Party loyalty but a second asking of the question posed a year ago in a referendum.  The public then responded with a loud raspberry to current practices.  Will voters now reinforce the Brexit option, or draw back from boat-rocking?

MPs who didn't want an election.
Will Corbyn bag Trump-style win for the underclass?
Lib-Dems under fire
May steals manifesto pledge from Miliband

Gina Miller plans 'biggest tactical voting effort in UK history'
“Only the Conservatives have a plan for a stronger Britain which will build a stronger economy that rewards people who work hard and create secure and well-paid jobs.”

Let's make June the end of May

We fool ourselves in the UK into thinking we have a choice of five possible parties who could govern. We are actually a bit like the US.The reality is we have a choice between two parties - Tory or Labour who will govern.

A vote for Green, SNP, Lib-Dem, UKIP, or a spoilt ballot paper will, in all likelihood simply return a Tory government. So anybody voting in such a way will have no right to complain about a Tory government.......you will have helped put them there.

The decision people need to be brave enough to make is to vote either Labour or Tory........forget the other parties - wasted votes that will simply put the Tories back in power.

It's make your mind up time, folks.........are you going to help return a Tory government by voting Green, Lib-Dem, UKIP, or SNP; or are you prepared to give Labour and Corbyn an opportunity?

If you dislike May and her Tory government so much the only realistic way to get rid of them is to vote Labour.

what I keep telling everyone - whatever you think about Corbyn - vote Labour, get rid of Tories - then deal with the fine detail.

If we don't get rid of the Tories, many of us won't be alive for the next round

A surprise General Election at this point in time could well have a surprise result.

With the benefit of hindsight, voters now know most of the likely consequences of Brexit, and may well be asking themselves why the toffs turned out to be so pleased with the Get-out-of-Europe referendum result.

Vote anything but Tory. You know it makes sense!

"Strong and stable" - May's phrase which Cameron also used (and we know how that worked out) ....... 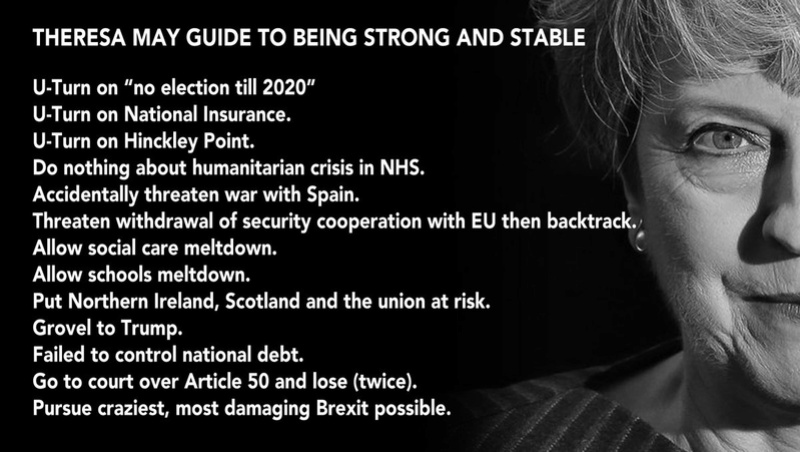 Not even George Orwell thought of writing a novel about "Big Sister".

Is there going to be a big turnout on June 8th. polling day?
Anyone who doesn't vote cannot complain about the result, whatever it is.

Few will be surprised to learn that the first 22 pages of today's Sunday Times largely consist of variations on the theme that a Labour Party under Jeremy Corbyn will have no chance in the General Election.  However Andrew Marr sounds a note of caution:

".... with the media consensus so strongly against Corbyn, I can imagine lots of bloody-minded voters all over the place thinking 'Don't tell me what to do.'  The more the Conservatives define the election as being simply about May versus Corbyn and strong government, the more some people will say, 'Hey no, I think this is about the NHS/underfunded schools/ social care ....'  take your pick.  Those 48 percenters from last year's referendum have been in effect instructed by May not to vote Tory."

Are we bloody-minded? I'd say, "bloody right we are!"

Compare these voting records and then consider who would make the better PM.... 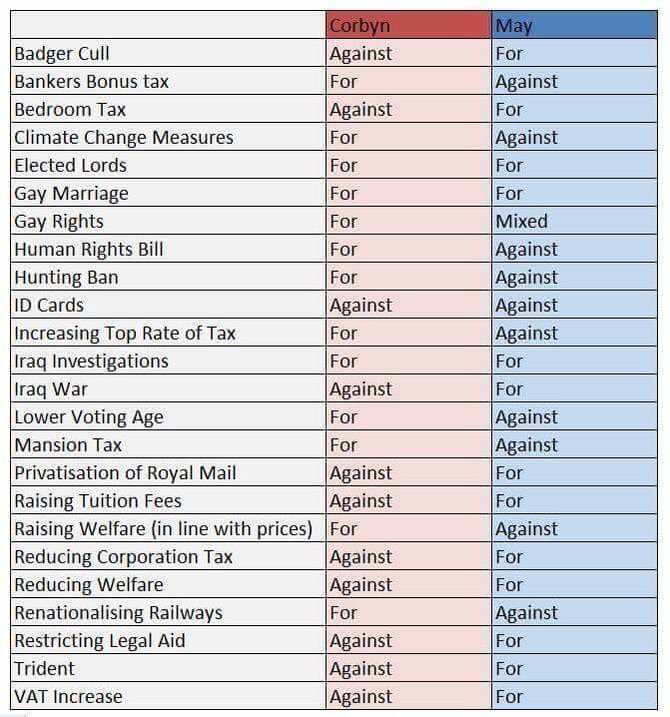 Let's put the Tories out of our misery on 8 June.

Is this weeks buzz phrase 'Strong and stable leadership'?..... Micheal Fallon = BBC Breakfast + Sky Sunrise News. He also managed to throw in 'Coalition of Chaos' just to keep that one going.... 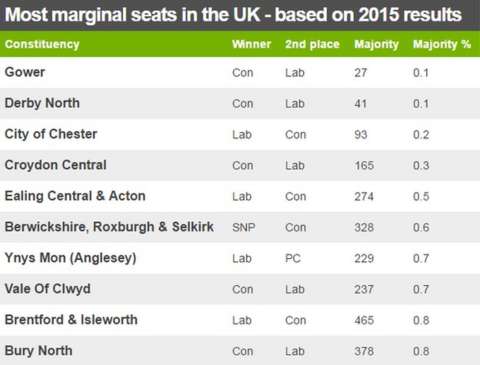 BBC Daily Politics Show's Jo Coburn continues to show the BBC's unbiased coverage of the 2017 Election....Asking Labour's Shadow Defense Secretary, Nia Griffith about Corbyn's interview on the Marr show, yesterday kept asking if a commitment to Trident was in the Labour manifesto for this election and kept asking/pressing if it WAS in the manifesto but when asking former Foreign Office minister Alistair Burt was asked if the Tax Triple Lock WOULD be in the Tory manifesto when it's launched in 2 weeks time........

So Labour must have their's ready now but the Tories can wait a few weeks........ 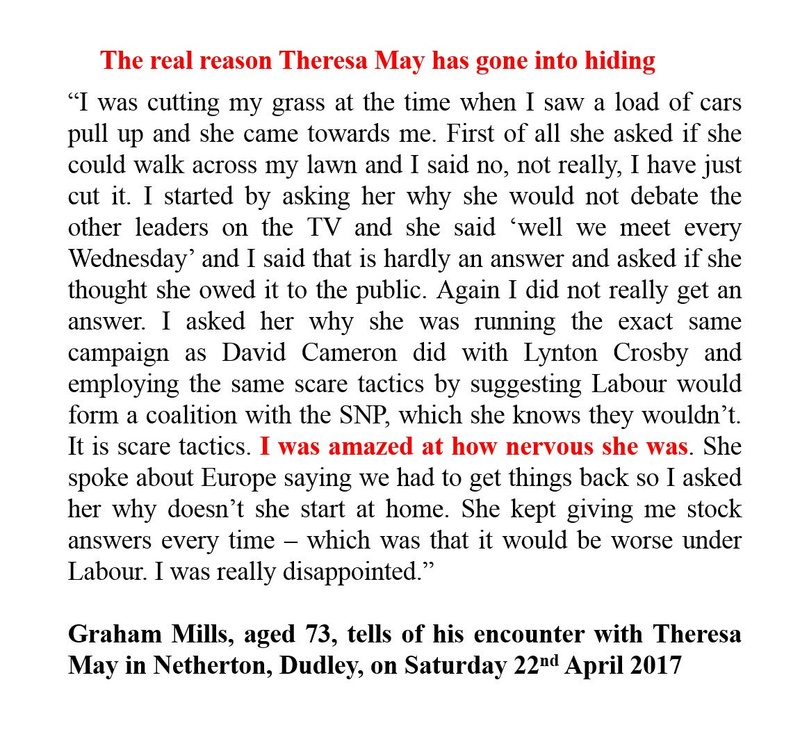 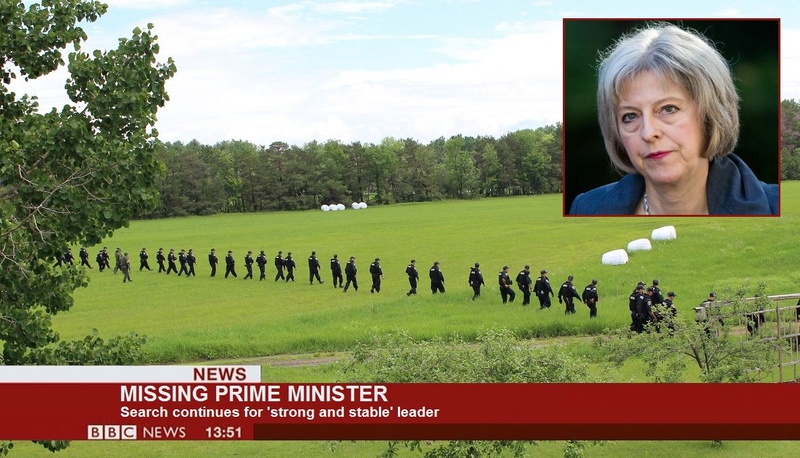 British PM: 'We Want To Lead The World In Preventing Tourism'

What does a "Think Tank" think about, and why does it think that?

"Opinion Formers" is a term not only appropriate to Newspapers.  Other constructions exist to massage the thoughts of electors, especially the groups referred to as Think Tanks, which sound innocuous enough.  What's wrong with thinking about something?
You may like to think about who finances a Think Tank, and why they do it.  The following Table might help: 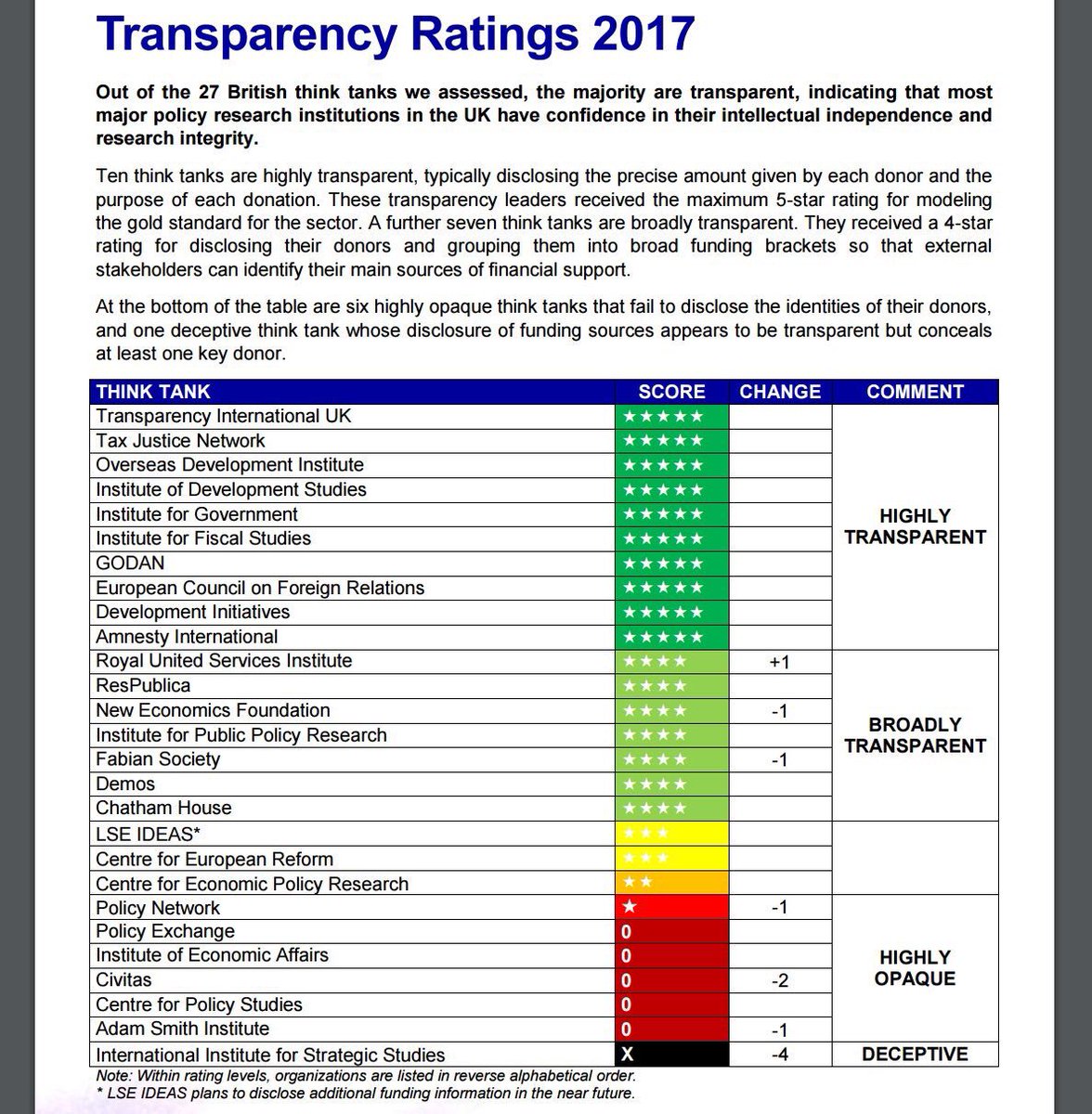 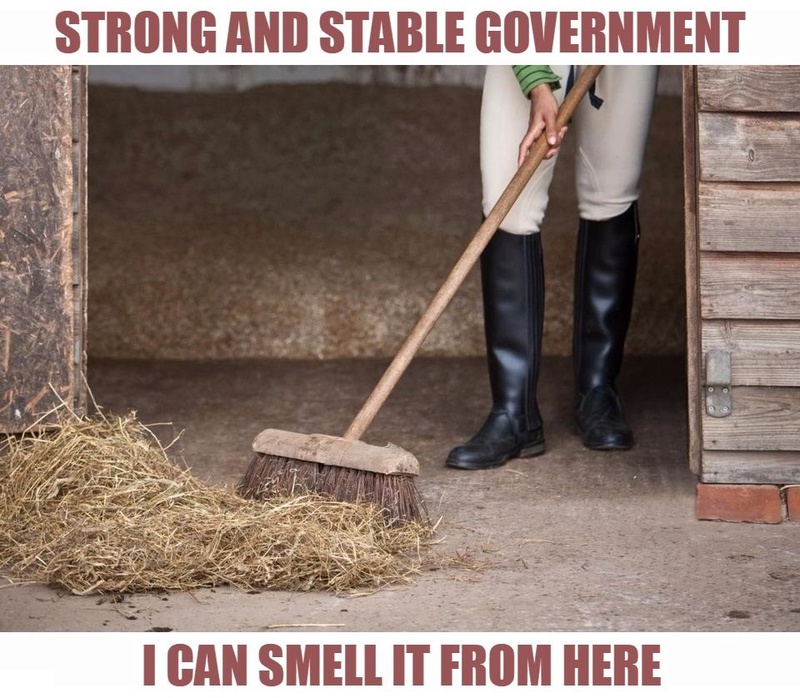 If ever there was a time to vote Labour, it is now

From an article by George Monbiot:-

"Where are the nose-pegs this time? Those who tolerated anything Labour did under Blair tolerate nothing under Corbyn. Those who insisted that we should vote Labour at any cost turn their backs as it seeks to recover its principles. They proclaimed undying loyalty when the party stood for the creeping privatisation of the NHS, the collapse of Britain’s social housing programme, bans on peaceful protest, detention without trial, the kidnap and torture of innocent people and an illegal war. They proclaim disenchantment now that it calls for the protection of the poor, the containment of the rich and the peaceful resolution of conflict. Those who insisted that Hague, Howard and Cameron presented an existential threat remain silent as Labour confronts a Tory leader who makes her predecessors look like socialists.

Blair himself, forgiven so often by the party he treated as both ladder and obstacle to his own ambition, repays the favour by suggesting that some should vote for Conservatives who seek a softer Brexit. He appears to believe that the enhanced majority this would deliver to Theresa May might weaken her. So much for the great tactician.

Yes, Corbyn's leadership has been marked by missed opportunities, weakness in opposition and (until recently) incoherence in proposition, as well as strategic and organisational failure. It would be foolish to deny or minimise these flaws. But it would be more foolish still to use them as a reason for granting May a mandate to destroy what remains of British decency and moderation, or for refusing to see the good that a government implementing Corbyn’s policies could do."

For the rest of the article:-
https://www.theguardian.com/commentisfree/2017/apr/25/vote-labour-jeremy-corbyn-theresa-may

So that was it. PMQs as a species of Divorce Proceedings, in which the antagonists shout insults at each other whilst claiming custody of the British electorate. A catharsis, a release from tension in the sense that for at least six weeks a spiteful government cannot pass any new Laws that would make life even worse for us than it is now.

There must be a better way, and the irony is that the Voter could so easily introduce a new era by electing a government on June 8th. which would not be led by Theresa May. 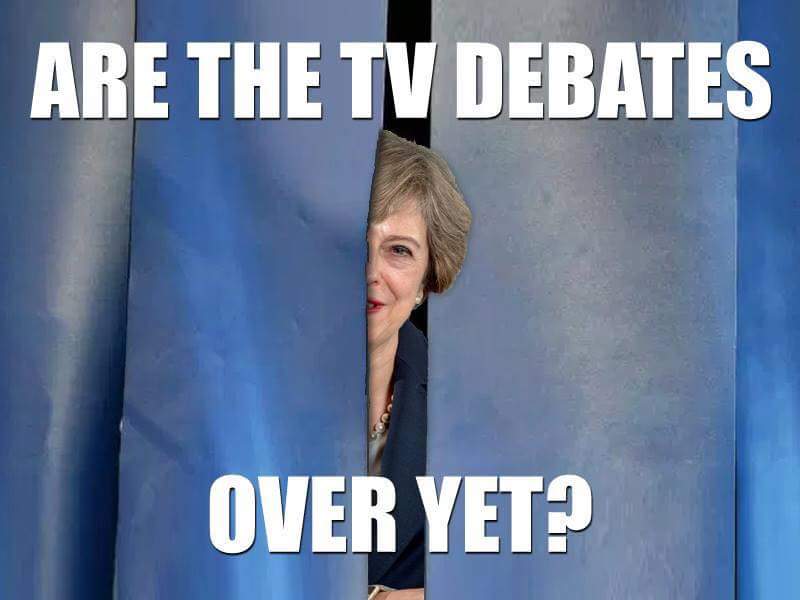 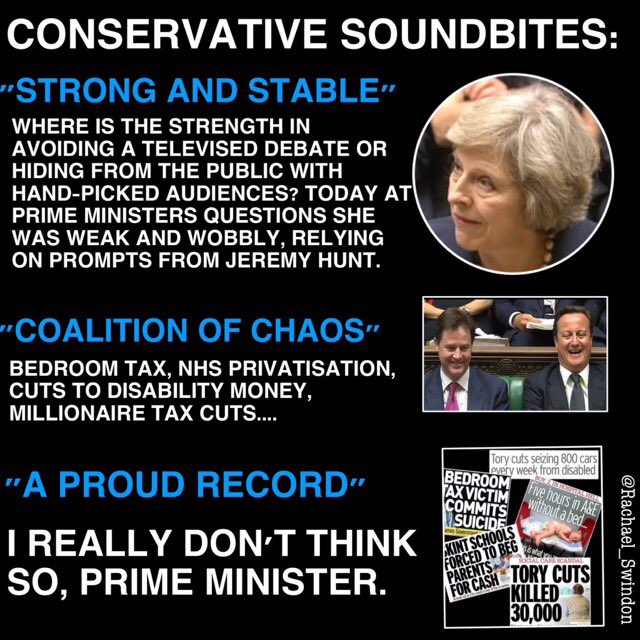 The photo shows CCHQ, Tory campaign headquarters, at the end of the road.

Every single last Conservative is obliged to follow the Campaign official line, which is why their slogan "message" doesn't vary. How long will it take them to realise that "identikit candidates" don't appeal to the British voter? 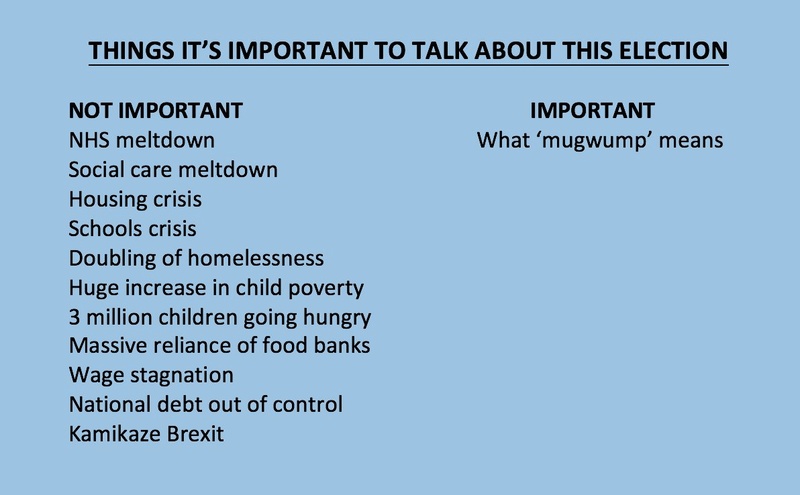 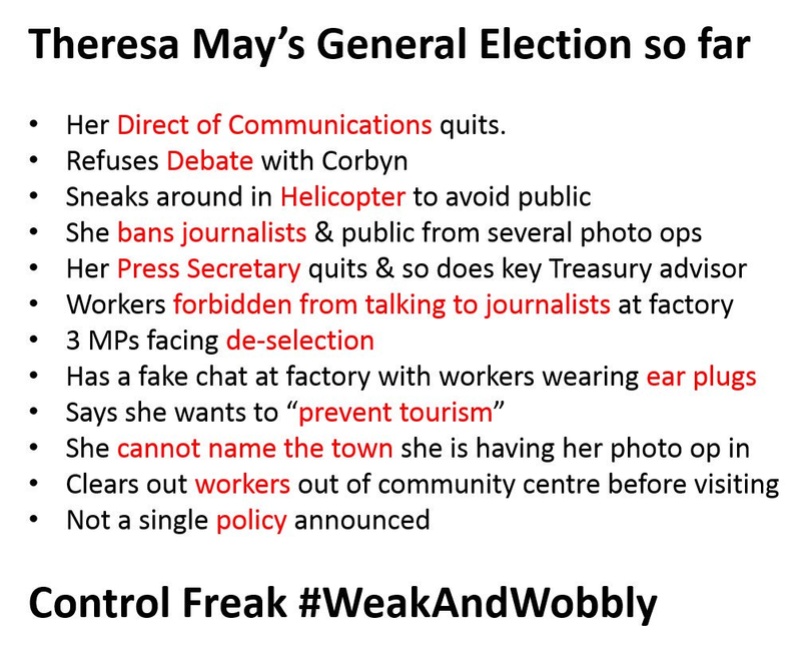 Strong and stable is the new weak and wobbly

16 parliamentary seats in Liverpool and two of their most famous (or infamous) 'politicians' have decided that they may stand a better chance of being elected by pick constituencies well away from their native city.........

Will the voters in these two chosen constituencies just blindly vote them in?

Usually do. Such places are not called "a safe seat" because of their park benches.

Theresa May is facing fresh accusations of “hiding” from voters after a campaign event held in Scotland was publicly listed as a children’s birthday party.

Bemused locals in Aberdeenshire had been unable to find the location of the Prime Minister’s visit, which was not advertised in advance.

It was only after Ms May spoke to assembled supporters at Crathes village hall that they discovered it had been booked out as a “child party” between 10am and 5pm.

Yes, well, the French philosopher probably had it about right when he said, "Hell is other people!"

Which is why a General Election normally means that Politicians have largely been able to avoid the Great Unwashed for five years.
That could yet prove to have been Ms May's fatal miscalculation.

What day is it tomorrow?

In case it has been obscured by the snap General Election, please get out and vote tomorrow in your local elections.
Councils are far from being just talk-shops and in any case the results will be taken as a pointer to the outcome next month.

Your vote, or its absence, could be doubly effective this time.  Use it or lose it.

well mentioned, OW - would be easy to forget among all the brou-ha-ha about the GE