Are atheists and left-wingers more intelligent?

Are atheists and left-wingers more intelligent?

Bertrand Russell once said that “the immense majority of intellectually eminent men disbelieve in Christian religion”, and research appears to support that remark. Michael Shermer, in ‘How We Believe: The Search For God In An Age Of Science’, describes a large survey of randomly chosen Americans that he and his colleague Frank Sulloway carried out. Among their many results was the discovery that religiosity is negatively correlated with education (more highly educated people are less likely to be religious). Paul Bell, writing in ‘Mensa Magazine’ in 2002 told us: “Of 43 studies carried out since 1927 on the relationship between religious belief and one’s intelligence and/or educational level, all but four found an inverse connection. That is, the higher one’s intelligence or education level, the less one is likely to be religious or hold ‘beliefs’ of any kind.”

Satoshi Kanazawa, an evolutionary psychologist at the London School of Economics and Political Science, suggests that more intelligent people are more likely to adopt evolutionarily novel preferences and values. He said: "Humans are evolutionarily designed to be paranoid, and they believe in God because they are paranoid. This innate bias toward paranoia served humans well when self-preservation and protection of their families and clans depended on extreme vigilance to all potential dangers. So, more intelligent children are more likely to grow up to go against their natural evolutionary tendency to believe in God, and they become atheists.”

Does this mean that people with left-wing views are more intelligent than those on the right? I’ve long thought that those with the independence of mind to be unaffected by the constant brainwashing attempts of the right-wing media must have a critical faculty which those who succumb to Tory and Republican propaganda clearly lack. It also appears to be the conclusion of experts at Brock University in Ontario, Canada, who studied research comparing childhood intelligence with political views in adulthood in 15,000 people. They found that intelligence, rather than education, wealth or social status, decides whether people are narrow-minded or bigoted in later life. Their report has been published in a journal called ‘Psychological Science’ and states: “Those with lower cognitive abilities may gravitate towards socially conservative right-wing ideologies that maintain the status quo. That is because it provides a sense of order". The authors found a strong link between low intelligence both as a child and an adult, and right-wing politics.

Sources used, and for further details:-

Dr, Sheldon,
You have no excuse worth considering after your continual pointing out of my own errors that are due to the unfamiliarity of the computer and you claim to be an expert.

polyglide wrote:Dr, Sheldon,
You have no excuse worth considering after your continual pointing out of my own errors that are due to the unfamiliarity of the computer and you claim to be an expert.

Nonsense. you're incapable of honest discussion, have resorted continuously to petty ad hominem from the very start, and not just with me, and despite several declarations to desist you always resort very quickly to the same petty ad hominem when anyone disagrees with you. You simply can't grasp the concept of debate an discussion where your beliefs are concerned, you simply can't tolerate anyone criticising your personal beliefs in any way, even if the slight is perceived rather than real, and lash out like a child. You ignore substantive responses with discourteous dismissal, and never ever acknowledge an error no matter how obviously it is evidenced. On top of all this you simply repeat endlessly your beliefs in the worst kind of sententious preaching, and though people do you the courtesy of offering substantive responses you ignore them in the pattern I've just described. Who knows why you come here, my own contribution has long since abandoned any pretence you'll offer anything of any value, and is probably more a stubborn response to the way you bullied Awfultruth and Stu and are trying the same with me. Again I am more than happy for people to read this thread from the start to see that what I have described is true, I advise you do the same, as you may even start to realise how rude and dismissive your posts are when you disagree with others.

Your spelling and grammar as I told you long ago are only raised because you persist in lying that others have a poor grasp of what has been written, I could fill pages with quotes of you telling multiple posters this asinine claim, it's risible, and especially where clearly well educated and intelligent posters offered expansive and erudite responses. If you want to discuss the topic go back to any one of the expansive posts in this thread offering solid evidence based on multiple studies in multiple countries over decades of research using large test groups, and in nearly every instance showing that belief in a deity decreases as intelligence and education increases. Try offering explanations that don't involve straw men arguments based on misinterpreting what the research has shown.

Dr, Sheldon,
To respond to the actual matter in question is what I have attempted on several occasions to do but somehow it gets lost.

As I have stated previously, there is no means of actually proving or otherwise of the question posed.

There are intelligent people in all walks of life and the question is dubious because it does not state more intelligent than who or what.

You're simply dismissing the research's conclusions because you don't like them, exactly as I said. No one has ever claimed there aren't intelligent theists,  in fact each time you've raised this non-sequitur I've pointed out that this is not what the research is showing. The simple fact is that multiple studies in different countries using very large test groups over decades of research has consistently shown that belief in a deity decreases in proportion as intelligence and education increases.  This evidence is so substantive that it is beyond any reasonable doubt.

Dr, Sheldon,
The findings may be beyond reasonable doubt but the means of obtaining them is far from acceptable and I have given you references that establish this.

If the findings are beyond a reasonable doubt then the methods must be accurate they could be nothing else. You have offered no references to anything I have seen, only your own opinion and broad dismissals of the research, even though you here accept the conclusions it makes, rather bizarrely.

Why are you calming that research spanning decades, conducted in multiple countries over those decades of research by reputable research companies, is "far from acceptable"? What is it about their methods that you find far from acceptable other than the results, which you have here bizarrely accepted are beyond any reasonable doubt? What evidence have you for your objections? 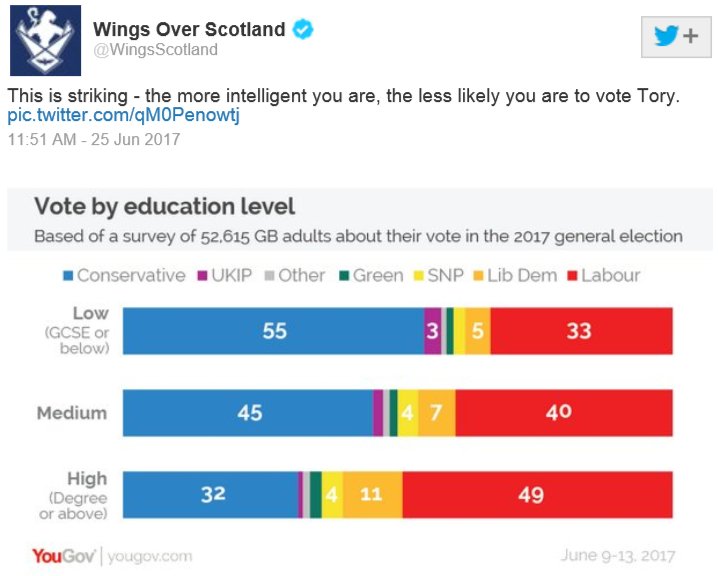 It occurs to me conservatives tend to have an 'islamic' mindset in that they believe they have a right to impose their views on others and society as a whole should just obey authority and their 'betters' whereas liberal thinkers believe individuals have rights to live as they choose within the law and so long as they aren't hurting anyone else, damaging property or the environment. I'm not sure that I see conservatives as much different from islam to be honest (very broadly speaking).

God has given me sufficient intelligence to recognise that no "elected representative" is likely to be better than I am at looking after my interests and those of my dependants.

It would be nice to get rid of all intermediaries.

I imagine anyone believing their views are sanctioned by an all powerful deity is disinclined to listen to those who who don't share and often disagree with those beliefs and views. Religion has a long and bloody history of labelling such people as evil and condemning them. As to extreme political ideologies which many authors have shown as analogous to religions in the way they deal in absolute power and are uncompromising of contrary views, often violently.

It's surely no accident that among the first victims of such regimes are intellectuals and free thinkers. Highly educated people who have developed their ability to think independently are not easy to brainwash with propaganda.

I think this particular notion would be more closer in relation to a "Moral intelligence" imo. For example; if one were to take into account, that for both atheists and the religious you'll find a varied lot in all the various classes of society, in all the groups be it rich or poor.

The "educated" I find interesting because I have come across and also having associations with - the educated who seem to me, more or less of two types.

An individual well educated and does quite well with what he or she has been taught. Years of aquired knowledge "within" the sytem he or she is trained for. Unfortunately ...outside the known environment where there may be changes for example ends up in a foreign environment which doesn't register with the education that was studied for. ( I have left this a little vague because this can be applied to many areas).

Like the above lettered green although the difference is; this individual has the ability to adapt outside (think out side the box) his knowledge. This would obviously be an individual that is an "Analytical Thinker"

(unlike type B quite impressionable in regards to the "freethinkers" discription having aquired a lot of knowledge but can't really adjust and adapt by what he or she has learn't soley quoting other references by someone elses conclusive ideas).

Incredibly but no surprise those analytical thinkers granted some a little more than others maybe, depending on where they are positioned ... can be found in any group of society.  Perhaps like those "garden shed inventors" as one small example.

I would then concur that leftists seem more intelligent ..morally if you will. Quite noticeable by how things have been with the Tories these years.

Tories can be quite intelligent. Until greed over-rides everything else.