'Wings Of Madness' by Paul Hoffman

'Wings Of Madness' by Paul Hoffman

Wings of Madness
This biography, written by Paul Hoffman, describes the life of perhaps the most famous man of whom you’ve never heard; Aviator and millionaire Brazilian coffee heir, Alberto Santos-Dumont. As Paris entered the 20th. Century Santos-Dumont took up residence there at the age of 27 to pursue his passion for flight aboard hot-air balloons, progressing to helium-filled “dirigible” airships of his own design. It’s said he regularly used one as transport to his favourite Maxime’s restaurant, tethering the aerostat to a lampost outside. A friend of M. Cartier, he persuaded him to manufacture the first wristwatch, which was more practical in an airship than the conventional pocket-watch then fashionable.
Santos-Dumont later designed and flew what many French aviation enthusiasts believe was the first powered heavier-than-air machine capable of carrying a man, predating the Wright flyer, although his tail-first 14-bis was really only capable of sustained 'hops'. Later his 1907 petite "Demoiselle" (Dragonfly) was the first popular mass production sports airplane, selling in large numbers, despite being designed for Santos-Dumont's slight physique.

Alberto Santos-Dumont was, and still is, revered in his native Brazil as a national hero for his pioneering achievements in aviation. After his suicide, in 1932 due to depression over the military use to which aviation had been put to during and after the First World War, Alberto Santos-Dumont's heart was sealed in a case, and is on display at Brazil's main Air Force training facility, Campo dos Afonsos. 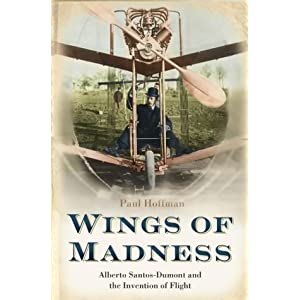