Squatting - who are the real criminals?

Squatting - who are the real criminals?

Cameron's fascist government has just brought in a new law to make squatting a criminal offence, punishable by a fine of up to £5,000 and six months’ imprisonment. For a start, the punishments show how out of touch Cameron and his cronies are! How many squatters have got a spare £5,000 to pay a fine? And isn’t a bed in a prison cell less of a ‘punishment’ than sleeping rough in a doorway in the middle of winter?

Although breaking and entering in the furtherance of theft has always been a criminal offence, squatting has until now been a civil matter. If you had come home from your holiday and found your house occupied by squatters, you would have needed expensive and time-consuming (nine months on average) litigation to get the squatters removed. That’s unfair, and if that was the real issue here, this new legislation might be acceptable.

However, that isn’t how the vast majority of squatting incidents occur. Squatters usually move into properties that have been left empty for a long time, often by local authorities. There are nearly 800,000 empty properties in the UK, but only 280,000 of them are long term empties. The rest are empty for valid reasons - awaiting new tenants or owners to move in, or for probate to be sorted out. And then, as Shelter has pointed out, many long-term empty properties are in places where people don’t want to live.

House prices doubled in a year in 1972-3, but even then a mortgage to buy a property was still attainable by those who earned little more than the average income. Those with children who couldn’t afford to buy would get the chance of renting a council house, and the rents of private properties were controlled by law. Then along came Thatcher to upset the apple cart. Now we have two million households on waiting lists, and the average age of a first time buyer is 37.

“Thatcher opposed public housing, or council estates, on philosophical grounds, believing that the state had no role to play in the housing market. The council estates were filled with the type of people who wouldn’t vote Tory because it wasn’t in their economic self-interest. Thatcher was convinced that if they could be brought into the market, they would start to identify with the interests of the wealthier people who opposed redistribution. With that in mind, she offered strong incentives to the residents of public housing to buy their flats at reduced rates.

Those who could became homeowners, while those who couldn’t faced rents that were almost twice as high as before. It was a divide-and-conquer strategy, and it worked: the renters continued to oppose Thatcher, the streets of Britain’s large cities saw a visible increase in homelessness, but polls showed that more than half of the new owners did switch their party affiliation to the Tories.”

What exacerbated the housing problem is that the Tories wouldn’t allow councils to build more homes with the receipts from council house sales. The Labour governments after 1997 also had an inexplicably poor record on building new houses; maybe they could see little point if a future Tory government was only going to use them for social engineering and as bribes?

In the absence of council houses and in order to avoid homelessness, massive amounts of taxpayers’ money has been transferred to greedy private landlords as housing benefit. So who are the real criminals? Squatters, who need somewhere to live? Thatcher, for ruining the UK’s housing system to satisfy her right-wing ideology? Or private landlords, whose rents are often so exorbitant that they almost match hotel room prices?

The law of supply-and-demand governs the rent of private property. A total failure of ALL governments since 1980 to provide adequate housing has created a fallow field for private investors. Unless and until someone in authority gets off their padded arse to build accommodation that real people can afford, nothing will change.

Update: Gideon Osborne has announced measures to release "Green Belt" land for Developers to build on, and his pal Cameron has relaxed planning controls on the extension of existing homes by up to 24 feet. The message being that "building" is going to galvanise economic recovery.

Hopefully the British experience will be better than that of either Spain or Ireland which both have swathes of incomplete housing estates that nobody can afford to buy.

Meanwhile, in the roller-coaster ride which is Estate Agency, house values (excluding London) are not expected to rise for at least twelve months, though advertised asking prices are at a peak. Sellers should be prepared for the long haul, particularly as mortgage rates are on the up.

Not many years ago a local builder keenly asked me to sell him a part of my garden for development. I quoted him a price which made his eyes water and his enthusiam disappeared quicker than a Clegg Pledge after an Election.

Now he has obtained a plot just up the road and - fortified by Cameron's ' free-for-all build-what-you-like' policy will probably construct something monstrous to spite me .

Parliament is looking for a temporary new home while the H of P are stripped of asbestos and re-gilded. Wonder where they will alight upon.

" Fenella, would you like to see my extension?"
" Honestly, Crispian, you promised to keep off the Wincarnis..."

Eric Pickles is planning a new assault on travellers, in a chilling sign of what may be to come for those forced into homelessness by the shambolic welfare reforms.

Rarely has their been a better example of this government’s mixture of casual brutality and gross stupidity than suggesting that people who are both transient, and often poor, should be given huge fines.

Those who live in vehicles, whether by choice or necessity, will be fined and harassed. Squatters will be jailed. Protest camps or ‘shanty towns’ will be violently shut down. Slowly but surely homelessness is being criminalised. On one hand the government forces thousands into homelessness by cutting, or scrapping housing benefit. With the other it introduces new laws to ensure that those made homeless have nowhere to go. 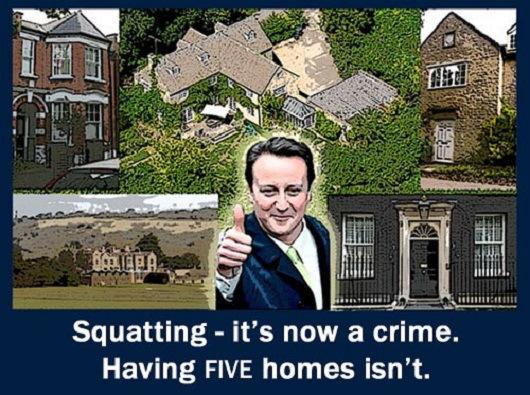 There are not many Tory MPs who are not incidentally owners of domestic housing which is rented to the public.

They may take a dim view of squatters.

It is not wrong for people to own more than one house. Full stop.

It IS wrong for people to enter someone else's house and seek to take it over. No doubt we will be seeing more of this phenomenon when we welcome our overseas guests, the able-bodied youths of Africa and Asia, who will need accommodation when they invite their families to join them.

I would imagine that if someone broke into your home in America you would have some entitlement to shoot them, but I have no certainty in this. I think in Britain we are required to go out and buy the intruders milk, bread and perhaps meat (not pork) before leaving them to it. At least that WILL be the case should Jeremy Corbyn ever be in charge.