I think there will be value (certainly for me!) in a thread about the 'charitable' think-tanks out there that are busy churning out state-stripping, wealth-favouring policies dressed up as 'fairness' or 'reform' - and to infiltrating themselves into positions of influence. Many of these think-tanks were founded by current/former Tory MPs, including ministers, or by international right-wing organisations, for promoting neoliberal thinking and disinformation of the public.

I'll kick things off with a post I just uploaded to my blog at http://skwalker1964.wordpress.com/2013/01/20/reasons-to-be-fearful-oakley-policy-exchange-foxes-in-the-benefits-coop/ - links to sources are in that version.

REASONS TO BE FEARFUL: OAKLEY & POLICY EXCHANGE, FOXES IN THE BENEFITS COOP 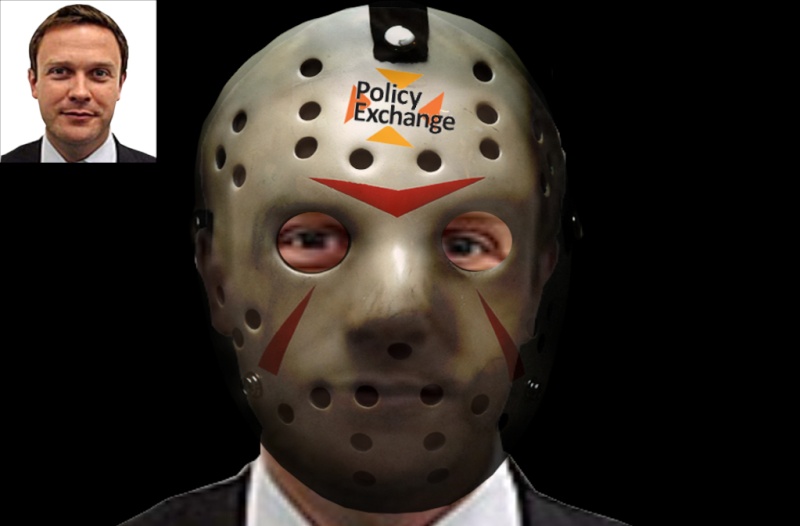 I am delighted to welcome Matthew Oakley to the Social Security Advisory Committee. He will bring a wealth of skills and experience to the Committee at a time of fundamental reform of the welfare state.

Many won’t be aware of how much of a disaster this is for millions of vulnerable people in this country. Matthew Oakley is the ‘Head of Economics and Social Policy’ at Policy Exchange – one of the most influential Conservative pseudo-charities devoted to devising policies that will be beneficial for the wealthiest. Both the organisation and Mr Oakley himself merit serious scrutiny.

Like others of its ilk, Policy Exchange claims to be ‘completely independent‘ and to work with ‘policy makers from all sides of the political spectrum‘, yet it was founded by Tories (current Tory ministers Michael Gove, Francis Maude and Nick Boles), is run by Tories (alumni include Chris Skidmore, Charlotte Leslie and Jesse Norman), and actively solicits financial donations from the US, hotbed of free-market ideology, in order to advance its programme and goals.

Policy Exchange has an odious present, but it has a dark and rarely-mentioned past, too. In 2007, the ‘charity’ was revealed by the BBC’s Newsnight programme to have forged receipts from 5 mosques in order to incriminate them in the sale of extremist literature for its report, ‘The Hijacking of British Islam‘.

These receipts appeared to "have been created on a home computer, rather than printed professionally as you would expect. The printed names and addresses of some of the mosques contained simple errors and two of the receipts purportedly from different mosques appeared to have been written by the same hand".

Exposed, Policy Exchange‘s spokesman tried to bluster his way out of the accusation on the Newsnight programme, and denied that the ‘charity’ had used the falsified receipts for its report – but did not deny that the receipts had been falsified. 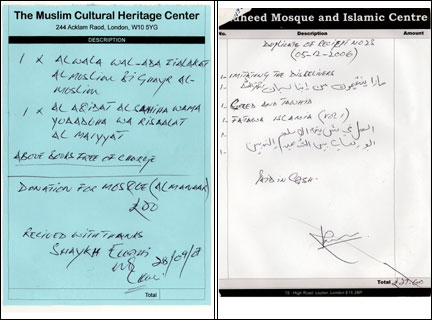 As Newsnight’s then-editor, Peter Barron, pointed out in a riposte still available on the BBC website, analysis of the 5 receipts showed:

This is the organisation that the Tories are putting in a position of direct influence over social security policies and the well-being of millions of people by ‘welcoming’ Mr Oakley onto the committee.

Mr Oakley joined Policy Exchange relatively recently, and there is nothing to suggest that he had any involvement in the misdeeds of his organisation mentioned above. But his own articles and statements show that inviting him onto the committee is, in its own right, an example of putting the fox in charge of the chicken coop on a par with commissioning the asset-stripping, Wonga-owning Adrian Beecroft to write a report on employment protection.

Let’s take a look at some of his ideas. Many of these are taken from Mr Oakley’s document for Policy Exchange, ‘Welfare Reform 2.0‘ (WR2.0). I’ll include separate links to any that are not:

The assumption should be that in-work claimants of Universal Credit will face a stronger conditionality regime than present until they are earning the equivalent of 40 hours at the National Minimum Wage..Part-time employees claiming Universal Credit could be required to provide Jobcentre Plus with evidence to show that they are seeking longer hours, higher pay or higher paid jobs..Failure to do so should lead to a benefit sanction.

A very high percentage of jobs being created under this government are low-wage, part-time jobs. Housing and income support benefits help those in poorly-paid full-time and part-time jobs to make ends meet – in effect a subsidy from taxpayers toward private profits, as companies who choose not to pay a living wage allow the taxpayer to keep their employees in food, clothing and housing.

But Mr Oakley doesn’t wish to resolve this problem by making companies pay decent wages. No – he wants to impose benefit sanctions on anyone who works part-time for not getting longer hours, finding additional jobs or getting paid a higher rate.

Some 1.4 million people currently say they are in part-time work because they’re unable to find full-time, but Mr Oakley uses his ‘author’s own calculations’ to write off 1.1 million of these people as not trying to find longer hours.

He also ignores the fact that many people work part-time jobs because their family or other responsibilities require it. Single parents in low-paid jobs are likely to need hours that will allow them to get their kids to school and pick them up afterward, and income from additional hours would not cover the cost of childcare. People caring for elderly or disabled loved ones will have to time any hours worked to fit with the availability and extent of assisted care.

But being a responsible parent or relative – and someone who ‘does the right thing’ as the Tories love to say – would, under Mr Oakley’s scheme, be punishable by benefit sanctions. But it’s better than expecting those lovely ‘wealth creators’ to pay a proper wage, I guess.

This one is quite remarkable. According to Mr Oakley,

simply increasing work incentives will have little impact on decisions over employment and hours of work.

The right solution, according to Mr Oakley, would not support

Workfare might not work, but we should have more of it

In a section titled ‘Bolder policies for delivering conditionality have not been tested: workfare and time limits’, Mr Oakley looks at the Mandatory Work Activity (MWA) scheme (commonly known as ‘Workfare’) and acknowledges that

although a number of claimants moved off benefit in the first three months following a referral to the scheme, after five months, there is no measurable effect on benefit claims

In other words, people should be treated as guineapigs and allocated at random to either the current benefits regime or to a ‘workfare’ placement. No wonder the Tories want to be free of European human rights legislation.

This is apparently all justified because

3.6 million households will still be workless.

they need to be more ambitious.

Public opinion justifies everything – even if it’s wrong

In his introduction to his report and suggested policies, Mr Oakley writes that the British Social Attitudes Survey

found that 56% of respondents felt that “most unemployed people could find a job if they wanted one”. Together, these factors led to a situation where, before the recession and before the Coalition took power, the welfare system was in crisis.

But Mr Oakley seems to think that a patently incorrect public opinion meant ‘the welfare system was in crisis‘.

I suspect that, in Mr Oakley’s version of English, ‘in crisis‘ means ‘massive opportunity for us to cut‘.

Mr Oakley includes child benefit as an ‘out of work’ benefit, which is patently incorrect:

the balance of resources should be shifted from out of work benefits (CTC, CB)

In spite of his blatant error, he believes that

the balance of resources should be shifted from out of work benefits (CTC, CB) towards supporting work and progression in work.

The government has recently changed child benefit rules so that people on higher incomes receive a reduced amount or none at all. This breaking of the principle of universality is a Very Bad Thing. But Mr Oakley wants to go further – if you’re unemployed, or even working part-time, and therefore in most need of this crucial financial support, you shouldn’t get it. Not only that, but also

Consideration should also be given to limiting extra support given to families with more than three children.

So even if you’re working enough to satisfy Mr Oakley, you shouldn’t receive support for any more than 3 children. It seems that he hasn’t heard that one of the biggest problems the country faces is its falling birthrate and the consequent ageing of the population.

Unemployment benefits according to how much you’ve ‘paid in’

Almost 1.5 million young people between 16 and 24 years of age are currently unemployed - leaving school or university to find that they can't get a job. These young people, through no fault of their own, have had no opportunity to 'pay in'. What has been described as a disadvantaged generation faces being penalised for the situation imposed on them by economic crimes and mismanagement. Similarly, full-time single mothers and other people who have been unable to work will be penalised - and then no doubt hammered by the Daily Mail for their 'failure' in neglecting their children if they do work.

To keep this post to a readable length, I won’t go into detail on some of the other proposals that Mr Oakley would like to see implemented, or wild opinions that he holds, but will just list some of them:


If you put much of this evidence to Joe/Josephine Public, most people would be horrified and would not want Mr Oakley or Policy Exchange anywhere near positions of influence – yet such are their incestuous links with the Tory-led government that Oakley was able to walk into a position that means he will receive public money for participating in plans to impoverish most of the public.

It should, of course, come as no surprise that this government is looking to populate influential committees with people who are eager to implement and even extend its assault on vulnerable and ordinary people. However, the common practice of setting up ‘charities’ to devise and promote these policies and provide personnel for government committees and to populate talk shows is so devious as to merit the term ‘fraud’, and the overt and covert links among government, big business and these ‘think tanks’ are deeply unhealthy for our society and many others – and deeply dangerous to ordinary people.

This is a situation needs to be corrected urgently by the next Labour government.

Until that happens, it’s perfectly clear that there are many ‘reasons to be fearful’ and many reasons to resist – Mr Oakley and his employers included.

A good think-tank, just for balance..

I've been asked by the think-tank Ekklesia if they can use my blog articles on their site. No, that's not why they're good (although I like it lol). Here's a section from their 'about' page at ekklesia.co.uk:

Ekklesia is an independent, not-for-profit thinktank which examines the role of beliefs, values and faith in public life. It advocates transformative ideas and solutions rooted in fresh thinking shaped by a commitment to social justice, Christian nonconformism, nonviolence, and creative conversations among those of different convictions (religious and otherwise).

In the email discussion that I've been having with Ekklesia's director, he wrote to me:

we're not the kind of thinktank people with money are keen on supporting!..if we succeed with some grant apps, we will seek to pay
contributors - and indeed ourselves, which also isn't possible at
present.

So, a think-tank whose directors are not taking any kind of payment for their work until they get positive decisions on grant funding and can afford to pay their contributors - and one whose aims are genuinely stated and are not shaped by a hidden agenda.

I'd have far more faith in the statements and conclusions of such a think-tank than in anything put out by the corporate-funded Policy Exchange, Reform, Legatum etc.

Ekklesia are good - I look forward to seeing your contributions