Is feudalism alive and well in the UK?

Is feudalism alive and well in the UK?

If it isn’t bad enough having a family of privileged and filthy rich layabouts sponging off the state, it now emerges that their principal buffoon has a say in our so-called democracy!

Documents released to ‘The Guardian’ under the Freedom of Information Act show that ministers have had to seek consent from Prince Charles on at least a dozen government bills since 2005. His consent is required if the bill affects the interests of the Duchy of Cornwall - the multi-million pound estate which provides him with his “we’re all in this together” £18 million a year private income.

It comes as no surprise that Cameron, the Queen’s fifth cousin twice removed, has no plans to change the law to end this obscenity.

trevorw2539 wrote:Quote Oftenwrong. We're better than you lot, so be sure to do as you're told."

The Queen is subject to the state. What has SHE told you to do lately? Most of it is perceived ideas. The Queen's life is based around her work for the State, just as most people's lives are based around their work. Several hundred events each year for the State and charity, at the age of 90.

Good luck your Maj. You're welcome to it.

Few of us would have a problem with Queen Elizabeth II ruling us for the next millenium, but there is an immediate difficulty with the succession. Ask the Duke of Edinburgh whether his first-born is fit to reign over us. 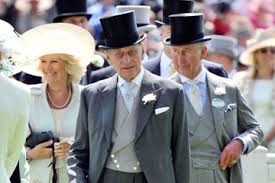 " What do you think the best bet is for me, Father?"

Planning an early retirement to Greece then, Dad? We're going to need your room when Mum pops it.

Residents of a Cornish hamlet are furious after learning the deeds to their homes are to be altered to show Prince Charles' Duchy of Cornwall estate has the rights to mine under their properties.

Clive Donner, who lives with his wife at Tutwell, Stoke Climsland, describes the letter from the Duchy as an ultimatum which would be expensive to fight. "When we purchased the property I examined the deeds; nowhere does it mention that Prince Charles has the mining and mineral rights in or under our homes. I also have deeds from as far back as 1847 for our property and again it does not mention anywhere anything about rights of the Duchy."

However, a spokesman for the Duchy of Cornwall told 'The Cornish Guardian' the properties were bought under the terms of a 19th-century Act of Parliament, which granted the mines and minerals reservations separately to the Duchy. Therefore the mines and minerals reservations do not have to be included in each individual sale. The letter to residents states owners have until December 3 to reply. If they object they must seek legal advice and provide relevant documentation and deeds.

A Duchy spokesman said that the land around Stoke Climsland had been owned by the Duchy since 1337 and mining and mineral rights were not included on the deeds because it was occupied by tenants until the 19th century.

Back off, Prince Charles... The countryside is too vital to leave to its grasping owners

From an article by Catherine Bennett:-

In the latest sermon in ‘Country Life’, the Prince of Wales returns to a favourite theme: the inability of most of his future subjects to connect with the countryside, or “land”, as its owners generally call this facility. It is not that town dwellers do not treasure the country, he concedes, more that they do not value the countryside in a special way natural to those who know the soil.

Without accusing the non-country bred of wilful damage, the prince suggests that towny ignorance might easily encourage neglect, or worse, of “the rich natural tapestry that is the countryside”. For instance: “It would not only be a folly to lose agricultural land, it would be equally foolish to use it in ways that are not environmentally sustainable in the long term.”

Many of us are familiar with his rustic experiments at Highgrove, for example, his milk in Waitrose, his grants to hill farmers and his own contribution to Hardy country, the fantasy Poundbury estate once described by Stephen Bayley as “fake, heartless, authoritarian and grimly cute”. An anonymous opponent, against further expansion, calls the prince “that rapist of Dorset”. The countryside is full of surprises; who, knew that a deep and timeless connection with the land can be compatible with a desire to build executive homes over it?

Supposing Prince Charles were capable of consistency, his true allies would surely be romantic townies, idealistic about preserving unspoiled and historic landscapes they will never inhabit; his enemies the landowners in and around this government, who are happy to vandalise any shared heritage they can’t see.

For the whole article:-
http://www.theguardian.com/commentisfree/2014/nov/16/prince-charles-countryside-planning-green-belt

"Country Life" magazine is strongly directed at readers in the upper echelon of old money, the Countryside Alliance and posh estate-agents.  It would be surprising to find Marxist theory discussed within its pages, but there is useful information on railway season ticket prices for commuters (average £550 a month into London).

Unsurprisingly, a popular theme is the increase in House Prices, which has been generated by the easy availability of cheap loans engendered by quantitive easing monopoly money.

To he that hath - shall be given.

Only £550 a month OW? cheap at twice the price do you not think

“Sporting estates – where the richest people in Britain, or oil sheikhs and oligarchs from elsewhere, shoot grouse and stags – are exempt from business rates, which was a present from John Major’s government in 1994. David Cameron has been just as generous with our money: as he cuts essential services for the poor, he has almost doubled the public subsidy for English grouse moors, and frozen the price of shotgun licences, at a public cost of £17 million a year.”

Extracts from an article by Nick Cohen:-

I sound a feeble republican when I say it, but if you have to have a hereditary head of state, Elizabeth II is as good a monarch as you can get - dull, cautious and safe. The palace and the politicians expect a smooth succession to the reign of Charles III, even though he is a man who has spent his life demonstrating how woefully unqualified he is to be a constitutional king.

Unfortunately, you never see intelligence and our future sovereign in the same room. He expects to be heeded, not scrutinised, and above all he expects to intervene in politics with a regularity and partisanship his mother never dared imitate or, as far as we know, ever wanted to imitate either. There’s no secret. His aides have announced that King Charles will “reshape the monarch’s role” and make “heartfelt interventions”.

After four generations of telling the British that the monarchy is a unifying force “above politics”, politicians do not even trouble to pretend that Charles III is anything other than a “player” with his own manifesto and prejudices. The question should not be whether you agree with him (although I would doubt your sanity if you agreed with his whole obscurantist world view) but: by what right does he interfere? To date, no politician has asked it. Monarchists of all people should worry that he is destroying their comforting myths. Instead, British monarchist politicians indulge Prince Charles. They hope that the show can be kept on the road and that Britain can muddle on until a better monarch succeeds him.

For the whole article:-
http://www.theguardian.com/commentisfree/2015/jan/03/prince-charles-meddling-monarch-royal-neutrality

Let’s not forget what Charles Windsor had to say about a decade ago:-

"What is wrong with everyone nowadays? Why do they all seem to think they are qualified to do things far beyond their actual capabilities? This is all to do with the learning culture in schools - the child-centred learning emphasis which admits of no failure and tells people that they can all be pop stars or High Court judges, or brilliant TV presenters, or heads of state, without ever putting in the necessary work or effort, or having the natural abilities.”