‘How Corrupt Is Britain?’ by David Whyte (ed)

‘How Corrupt Is Britain?’ by David Whyte (ed)

George Osborne’s father-in-law has vested interests in fracking, which this government is encouraging. The best man at Osborne’s wedding made a quick profit of £36 million when the Royal Mail was privatised.

The City of London controls a quarter of the world’s market for offshore financial services. $5.9 trillion illicitly left developing countries in 2001-11 alone. In 2012-13, £1.2 billion was lost to benefit fraud, but £120 billion is lost every year because of tax evasion and avoidance.

The House of Lords currently has 820 members. David Cameron has appointed 236 of them since coming to power in May 2010. Many of those appointed have made generous donations to the Tories. One of them was venture capitalist John Nash, who gave them £300,000. Then Duncan Smith gave him a £73 million workfare contract, Cameron gave him a peerage and, once in the House of Lords, Gove made him a schools minister.

Maybe you can understand why I nearly choked on my cornflakes when the BBC proudly announced one morning that, according to Transparency International, Britain is one of the least corrupt countries in the world. I suspect that Dr David Whyte would also be surprised: this is what he wrote in 2013:-

“There is now more than enough evidence in the public domain to show that corruption is endemic in our political institutions, our businesses and our police and security forces. We live in a world in which the boundaries between public and private power are increasingly blurred. Corruption appears to be spread through British public life using increasingly complex systems of capillary connections which show no respect for the boundaries between public and private domains. The narrow terms of accepted definitions of corruption simply don't capture what is going on.”

In 2015, Dr Whyte edited and published a collection of essays on the subject of corruption in Britain; George Monbiot calls it “a game-changing book which should be read by everyone”. The contributions are arranged into four sections: neoliberalism and corruption, corruption in policing, corruption in government and public institutions, and corruption in finance and the corporate sector.

The World Bank definition of corruption is “the abuse of public office for private gain”; Whyte argues that this is a very limited view of corruption. He says that in the UK (and other Western countries) the embrace of neoliberal economics has institutionalised corruption in support of an establishment elite of the rich and powerful, politicians and others in the privately schooled, Oxbridge educated upper classes in order to keep them in power and continue to enjoy the accumulation of their wealth and privileges, while at the same time keeping the lower classes firmly in their place. Note the way the ‘authorities’ reacted to the London riots of 2011, where trivial misdemeanours were savagely punished - in sharp contrast to the way bankers have evaded punishment for fixing interest rates and precipitating a global economic crash. We see our politicians with noses in the trough, fraudulent expenses’ claims, cash for questions, flipping their main residence for gain at taxpayers' expense, and we see them routinely lie, obfuscate and smear. Then when they leave office, they walk into lucrative employment often with the very businesses they were supposed to be regulating.

Writing for ‘The Morning Star’, Gwyn Griffiths says the conclusion to be drawn from Whyte’s book is that “institutional corruption in Britain is endemic, and he has assembled an impressive list of academics and campaigners to prove the point”. Some of the issues are familiar - police practices that include infiltration, entrapment, manufacturing evidence, killing unarmed men, ignoring evidence of child abuse and evidence of high-level corruption. Then there is the unregulated lobbying and the ‘revolving doors’ between government and business, enabling private corporations to exert their influence on Westminster.

Griffiths continues: “Complicit in this culture of sleaze are the ‘big four’ accountancy firms — Deloitte, PricewaterhouseCoopers, Ernst & Young and KPMG - creators of almost half of all known tax avoidance schemes, some of which are highly dubious. Helping the rich and powerful at the expense of the rest of us is the norm. Cameron may moralise about tax havens but his father chaired an offshore investment company based in Jersey and co-founded an investment company registered in Panama."

‘The Tablet’ says: “Whyte deserves huge credit for bringing different aspects of the picture together into a coherent, disturbing and persuasive expose of the hypocrisy of a country that so often likes to portray itself as some sort of beacon of probity in a corrupt world”. ‘The New Statesman’ describes the book as “ambitious”, adding that “Whyte is correct to argue that these examples point to a contemporary malaise”. If you thought that corruption was something which only happened elsewhere, please read this book.

Gideon Osborne still plans to sell Lloyds Bank shares to the public which were acquired following the 2008 credit crunch. Did Gordon Brown not pay for them with public money at the time? 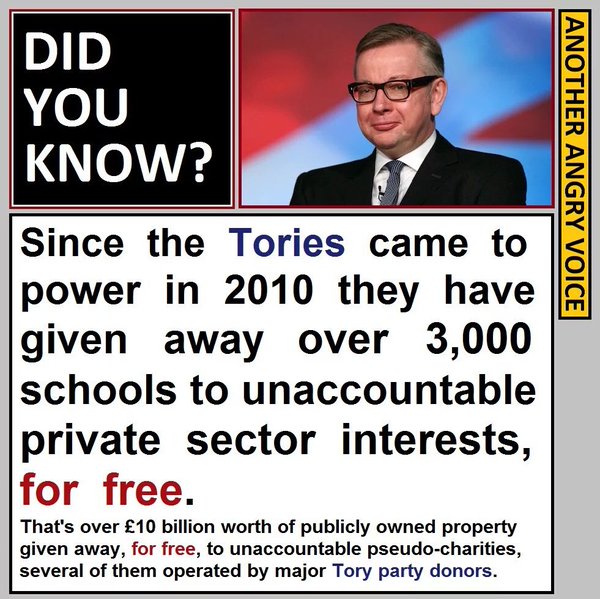 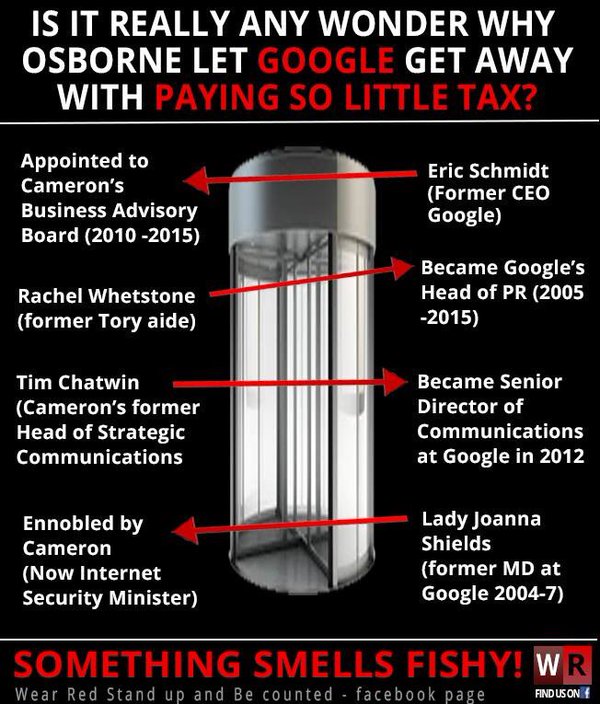 "You scratch my back and I'll scratch yours"

Anthem of the Tory Party

Have you ever wondered why Serco gets so many contracts from Cameron's government? Might it be because its CEO is in this picture (back row, second from right)? 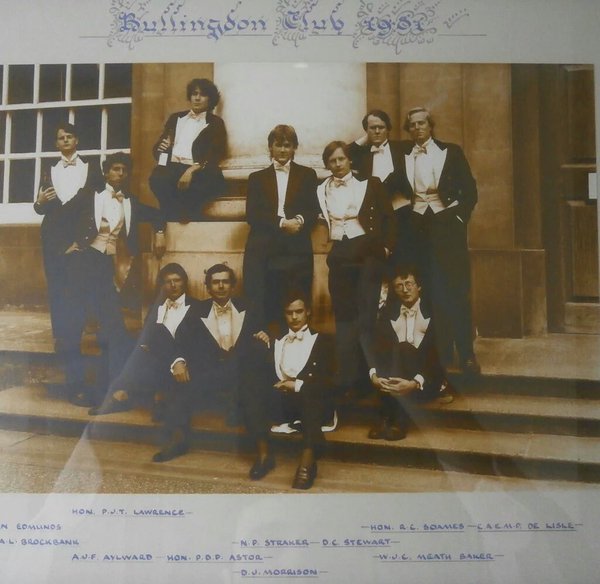 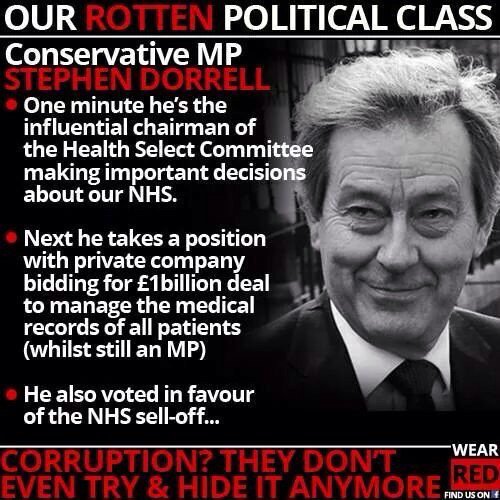 no more than an elaborate bluff

Giving cash for titles is not as daft as it may appear, within a very short time by attending the House of Lords evey day for an hour or two you can be well in pocket and an income for life.

There is corruption in every walk of life at the present time and involving every possible type of corruption and with the inability of the ordinary person to do anything about it, other than moan, it will always be so.

From an article by Simon Jenkins:-

“The essence of a corrupt state is ‘crony-capitalism’. It is the deployment of covert influence to subvert the disciplines of the market and revenue. It is bribery, tender-fixing, lobbying, tax-evading and otherwise abusing political power to secure individual or corporate gain. This week’s ‘Economist’ publishes a league table showing that Britain is the worst country in Europe, and 14th worst in the world. Nor does the index cover Britain’s role in oiling the wheels of crony-capitalism, through its supply of homes and tax havens to the global rich. A feature of the top 10 crony-capitalist countries is that their citizens feature prominently as (notional) residents of the Royal and Empty Borough of Kensington and Chelsea.

Since the 1987 big bang, when Thatcher and Lawson smashed the old City cartels, London’s bankers, lawyers, accountants and consultants simply booked the same comfy seats on the gravy train. They gained privileged access to Westminster and Whitehall. Privatised utilities and transport oligopolies ran rings round regulators. Party financiers bought seats in the House of Lords, making Britain the only assembly anywhere whose membership is auctioned annually.

As with crony-capitalism so with tax avoidance and tax havens. Cameron should tell these enclaves, from Jersey to Gibraltar and Bermuda to the Virgin Islands, that they and their citizens can go independent and federate to Panama or elsewhere if they want. Otherwise their hospitality to thieves from the world’s taxpayers should end. They should be treated by the Treasury in the same way as the Isle of Wight, and taxed accordingly.”

In places like Afghanistan, bribery is the only way to get things get done. The logic is inescapable if you want government to stay out of your business. In many ways its transparency makes the process more honest than our phoney Knighthoods and Lordships associated with a safe seat on the Board for retiring politicians.

The ordinary person has no chance whatsoever of changing anything.

There is not one person of any party that I would vote for, we have to choose between people chosen for us by a select number of people that represent a very small minority, they are usually chosen for unreasonable reasons, give a few pounds to charity and promises, promises etc;

The fact that MPs are paid any salary was introduced so that any ordinary person could become an MP, however, at the same time it is almost impossible for an independant to be elected due to the large amount of money needed to canvass etc;, and not many can be bothered.

There is little or no chance of things changing, you only have to consider the actions of all concerned regarding the EU.

If you took all the MPs who are corrupt in one way or another and put them on one side, I feel you could get all those that were left into a small telephone box.

I do not get involved in actual politics but just offer an obsevation.