It appears that at one time, and perhaps now?- they were, (or are?) actually using nuclear devices of some kind to achieve the release of natural gas or perhaps even using them in certain mining operations- when several hundred pounds of TNT just won't do anymore... I was reading through ProPublica’s chart of the history of government regulation, “From Gung-Ho to Uh-Oh“. I was very surprised that the first effort at releasing tight natural gas came from a nuclear bomb in 1969. The chart says that in 1969 “The government detonates a 43-kiloton nuclear bomb deep underground in an effort to get at natural gas deposits in Colorado.”

I suppose they shouldn’t have been surprised when it turned out that the resulting natural gas was too radioactive to use. The AP story which ProPublica links, “Legacy of nuclear drilling site in Colorado still lingers“, goes on to describe the 1969 explosion as causing the ground to roll, “Like a wave coming through.”

But this is the typical something-for-nothing scheme that strongly appeals to the Tory-led Coalition.

Kinda gives a whole new feel to the abbreviation 'TLC'....

Why not use fracking as a means of getting deep bedded gas, everything in this country is quickly becoming FUBAR, What are a few earthquakes, land slides and water pollution compared with even more to privatise so why not help it on its way,
The problems that fracking will bring about will be nothing in comparison to what this Tory led Coalition is doing and will give us another publicly owned asset which can be privatised offering even more opportunities of purchasing shares, then when the share price rises, they can flog them off to the French along with our existing gas and electric companies.
What a pity we can’t stick a few sticks of TNT up our Governments bum holes and release their gas from the correct orifice instead of their gobs.
Is it any wonder that Gideon Osborne want to push ahead with Fracking, he wants it up and running before they get booted out in May 2015, to enable them to offer incentives to the voters by way of cheap gas/shares.
If we need Fracking, I would rather it was under a Labour Government where profit isn't the only criterion but would be nationalised and dealt with in the nations interest.

An article in today's The Independent about fracking in the US comments on the problems it can create with polluted drinking water. Corner-cutting drillers are allowing all sorts of waste water containing poisonous chemicals to pour into river tributaries in remote areas.

But they wouldn't do that here, would they?

It makes me wonder, We in the UK do not have the expertise to get at this massive supply of gas by Fracking, so this is why our Tory Led Coalition Government are letting the French experts Frack for us at a massive cost. My point is, where do all these Froggy experts come from, where did they do their apprenticeships when Fracking is not allowed in France.

Generalisimo Franco ruled Spain as a dictator between 1938 and 1975. During that time there were of course various demands from the provinces for government regional investment. Franco responded by sending polluting industries to the poorest remote areas like Huelva (paper-mills) and the Basque country (Petroleum distillation and chemical production).

bobby wrote:It makes me wonder, We in the UK do not have the expertise to get at this massive supply of gas by Fracking, so this is why our Tory Led Coalition Government are letting the French experts Frack for us at a massive cost.  My point is, where do all these Froggy experts come from, where did they do their apprenticeships when Fracking is not allowed in France.

What "French Experts"? Fracking is banned in France.

Buckspigmy:  What "French Experts"? Fracking is banned in France.

After I wrote:
My point is, where do all these Froggy experts come from, where did they do their apprenticeships when Fracking is not allowed in France.

So Whats the difference? Or am I to think you are simply giving me a lesson in writing shorter sentences.

So Whats the difference? Or am I to think you are simply giving me a lesson in writing shorter sentences.

No, I am colour blind and you are using a text colour I can barely see.

Tory policies that actually benefit the Nation can barely be seen, but regrettably the Coalition doesn't seem to have an off-switch.

buckspygmy. You have my apologies. As my teachers used to say I should try harder, but in this case I shall try darker.

I tend to use blue to differentiate my quotes from others. It used to be easier as we only had the one dark blue, now there's millions of the buggers.

To frack or not to frack is a distraction from the main priority, which is to provide a stable source of energy for Britain that is not dependant on Fossil Fuel.

We already know from North Sea Oil, and Gas, that pricing of such commodities is global.  As will be the price of any shale-gasses found, so the exploiting companies will be free to sell their product to foreign buyers.

I don't see how that will solve much of the UK's energy problem. 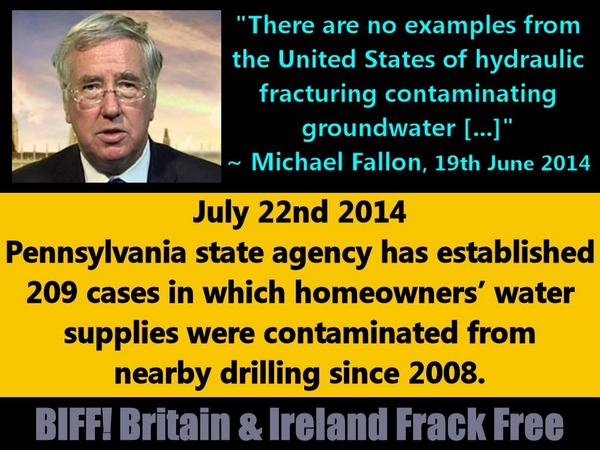 At a time when we have a Tory led Coalition doing anything they can to make their rich mates even richer, we the plebs are having to face explosions in our high streets, could this be linked to fracking as it seems one thing started at the same time as the other ?.

Matthew Hancock is the new Tory cabinet energy Minister. "I want to speed up shale. It takes too long at the moment. Climate change is an important consideration, but so is local beauty. Putting up windfarms in beautiful landscapes against the strong opposition of local people is not right." (Sunday Times)

Matthew Hancock is Member of Parliament for the West Suffolk Constituency.

I don't know what to say - that's just so wrong, on so many levels 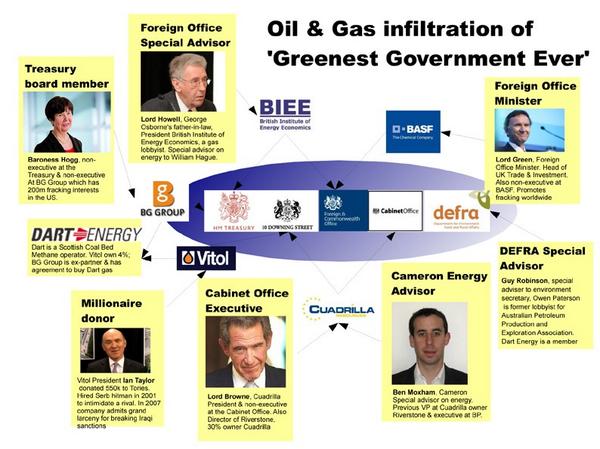 I can't escape a feeling that the Tory enthusiasm for fracking is someday going to come back and bite the government in the bum. But will there be a Tory government in office when it happens?

USA today, Britain any time soon - when you have politicians who believe that profit is good, regardless of any damage to others.

From an article by Seth Shulman:-

"At a Halliburton fracking site in Clarington, Ohio, a fire broke out on a recent Saturday morning. Firefighters battled the blaze for a week. Before they managed to fully extinguish it, the fire caused some 30 explosions that rained shrapnel over the surrounding area; 20 trucks on the site caught fire; and tens of thousands of gallons of chemicals - including a toxic soup of diesel fuel, hydrochloric acid, and ethylene glycol - mixed with runoff into the nearby creek, killing an estimated 70,000 fish as far as five miles downstream. State officials physically removed the decomposing remains of more than 11,000 fish and other aquatic life in their efforts to reduce the damage to the waterway.

If the severe damage to a local creek weren't troubling enough, this particular waterway feeds into the Ohio River where, just another 1.7 miles downstream, a public water intake on the West Virginia side of the river serves local residents.

Despite the fish kill and potential contamination of drinking water, the public still doesn't know the full list of chemicals that polluted the air and water supply. In fact, the fire raged and runoff occurred for five full days before Halliburton provided state and federal EPA officials with a full list of the proprietary fracking chemicals the company used at the site. Why? Because Ohio, like many other states, has a fracking disclosure law that does more to protect company secrets than it does to protect citizens."

Ivan.
Do you think that we have a government in power at the moment, more interested in profit than the side effects, that would be happy enough to use the fracking procedure? 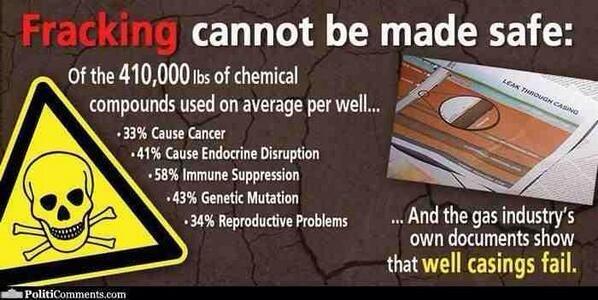 With the state of the opposition, as oftenwrong says it will be in power when it comes back to bite it on the bum.