Today, there are more than 67,000 homeless veterans in America.

Almost half of all homeless veterans in America fought in Vietnam, but there are as many as 20,000 vets who have returned from Iraq and Afghanistan and become homeless in the past five years, including women veterans with children. This number is increasing.

Private Larry Michaelis was 18 years old when he was flown into Vietnam in 1968, just after the siege of Khe Sanh began. Like other Vietnam veterans who defended the U.S., Larry did not receive a warm welcome when he returned home. And, after battling PTSD without treatment for years, Larry lost everything and became homeless.

Click title, the link above, or here for article and video.

It’s past time that Americans USV do whatever it takes, by any means necessary, to eliminate the phrase “homeless veteran” from America’s vocabulary.

[Wikipedia’s Terms of Use, effective 25 May 2012, states “You are free to: Share and Reuse our articles and other media under free and open licenses… Under the following conditions: Civility — You support a civil environment and do not harass other users. Lawful Behavior — You do not violate copyright or other laws. No Harm — You do not harm our technology infrastructure.” Wikipedia’s Creative Commons Deed states “You are free: to Share—to copy, distribute and transmit the work… Under the following conditions: Attribution—You must attribute the work in the manner specified by the author or licensor (but not in any way that suggests that they endorse you or your use of the work).” Full texts of Terms of Use and Creative Commons Deed available below.]

Ira Hamilton Hayes (January 12, 1923 – January 24, 1955) was a Pima Native American and an American Marine who was one of the six men immortalized in the iconic photograph of the flag raising on Iwo Jima during World War II.[1][2] Hayes was an enrolled member of the Gila River Indian Community in Sacaton, Arizona, and enlisted in the Marine Forces Reserve on August 24, 1942. He trained as a Paramarine and saw action in the Pacific Theatre of World War II. On February 19, 1945, Hayes participated in the landing at Iwo Jima and fought in the subsequent battle for the island. On February 23, Hayes, together with fellow Marines Rene Gagnon, Harlon Block, Franklin Sousley, and Mike Strank, and Navy Corpsman John Bradley, raised the American flag over Mount Suribachi, an event photographed by Joe Rosenthal.

Hayes was never comfortable with his new-found fame, however, and after his honorable discharge from the Marine Corps he descended into alcoholism. He died of exposure and alcohol poisoning on January 24, 1955… 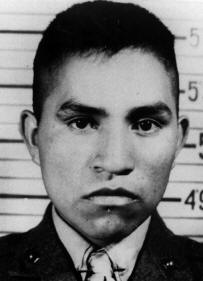 This is a human-readable summary of the Terms of Use.

Disclaimer: This summary is not a part of the Terms of Use and is not a legal document. It is simply a handy reference for understanding the full terms. Think of it as the user-friendly interface to the legal language of our Terms of Use.

Part of our mission is to:

You are free to:

Under the following conditions:

With the understanding that:

Under the following conditions:

I suppose back then the 'help' to reintegrate troops returning from traumatic combat wasn't so widely available, or even recognised as being necessary. I would hope recognition of such trauma is there now, and that more professional counsel/assistance is available if needed.

I've come to the stark realization, that even our country is guilty of
this.
We aren't treated well unless the cowardly populations are afraid.

I suppose back then the 'help' to reintegrate troops returning from traumatic combat wasn't so widely available, or even recognised as being necessary. I would hope recognition of such trauma is there now, and that more professional counsel/assistance is available if needed.

It’s interesting that, of all the songs I’ve found about Vietnam vets, this one by an Ozzie group is the best.

This is one of those subjects that can make one simultaneously sad, angry and frustrated.

I haven't got much else to say about it.

There will be no change in the treatment of War Veterans until - - - - UNTIL the politicos and other assorted wind-up merchants have them selves, to wear camoflage, carry a burghan and weapons whilst wearing unsuitable footwear.

See the differences in treatment given to returning officers and that given to enlisted men, it stands out a mile

Since the Norman Conquest, the "Ruling Classes" have ever thought of the populace's bodies as fodder to fertilise the the mud of another country

Pitt the elder had a chance to put this right, but failed to recognise a problem.

This is one of those subjects that can make one simultaneously sad, angry and frustrated.

I haven't got much else to say about it.