‘The Churchill Factor: How One Man Made History’ by Boris Johnson

‘The Churchill Factor: How One Man Made History’ by Boris Johnson

“All the way through we hear Boris’s voice; it’s like being cornered in the Drones Club and harangued for hours by Bertie Wooster.” (Professor Richard Evans)

Winston Churchill died in January 1965. Boris Johnson has written a biography of him to mark the 50th anniversary of his death. Or was that Johnson’s motive for writing this book?

Johnson is a believer in the 'great man' theory of history and insists that Churchill “saved our civilisation”, claiming that “he, and he alone, made the difference”. That’s not exactly a tribute to the tens of thousands of servicemen who risked, and in many cases lost, their lives fighting the Nazis. Neither does it take any account of the enormous part played by the Americans and Russians in defeating Hitler. Anyone who has studied Churchill in detail (which Johnson clearly hasn’t) would recognise him as a flawed character who often showed poor judgement and who made some appalling mistakes in his career, some of which were during the Second World War:-

Johnson’s biography of Churchill is heavy on anecdotes and light on factual accuracy. You could say that Johnson doesn’t try to impress the reader with his research; for example, he claims that Churchill invented the RAF and the tank and founded the welfare state. Richard Evans writes: “Anyone who has the time or energy to press a couple of keys on a computer to look up ‘tank’, ‘RAF’, ‘welfare state’ or even ‘the Second World War’ on Wikipedia will see Boris’s sweeping claims vanish in a cloud of inconvenient facts. Churchill did not, as Boris claims, invent the term 'Iron Curtain' to describe the barrier between Soviet-dominated Europe and western Europe. It was first used by the Nazis – above all, by their propaganda minister Joseph Goebbels. Nor did he invent the term 'Middle East': it was coined by the American naval thinker Alfred Mahan in 1902.” Furthermore, the Germans did not capture Stalingrad, but this book claims that they did.

Of course, Johnson’s friends in the media have applauded this book. “He writes with gusto... the result is a book that is never boring, genuinely clever ... this book sizzles”, says ‘The Times’. We are told by ‘The Spectator’ that “the book's style is often chatty, enthusiastic and as funny as you would expect”. Neither publication picks him up over his inability to think historically. For example, he describes men such as Hitler as ‘short’ when their height (5ft 8in in his case) exactly matched the average height of European men at the time. Neither comments on his hypocritical disapproval of the extramarital affairs of Edith Aylesford, a society lady of the late-Victorian era: “That was how they carried on in those days, you see”, says Johnson. Not just in those days, was it?

When ‘The Radio Times’ describes the book as “a rollicking tale of a political maverick”, you might be forgiven for thinking that Johnson has written a fantasy about himself and called it ‘The Churchill Factor’. Sonia Purnell comments: “It becomes increasingly difficult at times to separate Churchill’s story from Johnson’s. When describing a figure of obvious appeal to young people today, Johnson refers to an ‘eccentric’ with ‘his own special trademark clothes’ who was a ‘thoroughgoing genius’. Who can he mean? We hear how Churchill was considered an adventurer, reckless, disloyal, untrustworthy, in possession of ‘death-defying self belief’ and consequently ‘not what people thought of as a man of principle; he was a glory-chasing goal-mouth-hanging opportunist’. And yet this embodiment of unlikely qualities eventually became the saviour of the nation and the hero of the free world. So, are we being subtly induced to believe that that is what Britain is also in need of now? If so, who can Johnson have in mind?” Richard Evans concludes: “Anyone who wonders why Boris has written this book need look no further than the general election that is due in a few months’ time. If the Conservatives lose, the leadership of the party will be up for grabs and Boris will be a candidate. Writing a book about Churchill might help people take him seriously.”

Published by Hodder & Stoughton, this excuse for a biography (408pp) went on sale for £25. Amazon seems to be selling it for £11 plus postage, and I suppose if you have a relative you really hate you could buy it for their birthday or Christmas present. The contemporary references to television shows such as Downton Abbey will help to ensure this book has a very brief shelf life; if you wait a few weeks you'll probably find it on sale for next to nothing in your local charity shop, possibly alongside the Jeffery Archer novels and Jeremy Clarkson claptrap. Amazon will even let you trade it in for one of their gift cards of up to 25p, “which you can then spend on millions of items across the site”. On the other hand, if you want a balanced and factually accurate biography of our wartime leader, you could read ‘Churchill’ by Roy Jenkins, ‘Churchill: A Study In Greatness’ by Geoffrey Best, or ‘In Search Of Churchill’ by Martin Gilbert. I certainly don’t recommend Boris Johnson’s account which, to use his own terminology, is “utter tripe”. 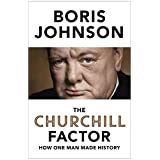 There was an amusing addendum interview touching upon this masterwork in The Telegraph:

I haven't read the book, and going by your review probably won't.....

Perhaps he should have written about Churchill's ancestor instead?

Churchill once said: “Success is going from failure to failure without loss of enthusiasm”. Boris Johnson seems to have taken his hero’s words to heart. Sacked as a trainee reporter by ‘The Times’ for falsifying his material, sacked by Michael Howard from his posts on the Tory front bench after lying about a four-year extramarital affair, so what does he do? He gets himself elected as London mayor and makes a mess of that role (with his mega expensive Routemaster buses and crackpot plans for an airport in the Thames). Despite being such a disaster, he now wants to get back into Parliament and take Cameron’s job when the knives come out next May. Failure certainly doesn’t dampen the enthusiasm of a man with an ego the size of a juggernaut.