Alex Nunns is a British writer, editor, political activist and musician. He has written this book, detailing Jeremy Corbyn’s surprise elevation to the post of leader of the Labour Party, and explaining why it happened. You could say that the plot-line is so implausible that it would be unusable in a work of fiction.

The book won’t be published by OR Books until 17 November, but the writer Deborah Maccoby seems to have read it already:-

“The tale of Jeremy Corbyn’s rise to power is the stuff of fairy stories – the complete outsider whose candidature in a contest is regarded as a joke, but who wins the top prize. The tale is a gripping one: getting Corbyn on to the ballot with literally seconds to spare; the sudden unexpected taking off of his campaign; the hysterical attempts by horrified New Labour politicians and journalists to appeal to Labour Party members not to vote for him; the smear campaigns; the final unbelievable result. It is also a highly entertaining story, wittily told.”

A lifelong and outspoken socialist, Corbyn only managed to get on last year’s ballot for the Labour leadership after his supporters begged for nominations from MPs who subsequently declined to vote for him. He did so at a time when even his closest political allies saw little hope for progress by the left. And yet, just a few months later, Corbyn didn’t just win the Labour leadership, he crushed his opponents, winning 60% of the vote from a party membership that had more than doubled in the previous five years. The journalist Liam Young writes: "If you’ve been inspired by the movement growing around Jeremy Corbyn, or simply want to know a bit more about the Labour leader’s unlikely rise to power, this is the book for you”.

Nunns makes a convincing attempt at explaining Corbyn’s victory:-
1. Dissatisfaction with Blairism stirred by the invasion of Iraq.
2. The financial crash of 2008 and the resulting anti-austerity movement.
3. The changes in the electoral rules of the Labour Party.
4. The ability of social media to galvanise the grassroots.
5. The leftward movement of the trade unions, which had been crushed by Thatcher and despised by Blair.

It’s ironic that Labour’s new voting rule - opening the leadership contest up to supporters who paid £3 - was intended to boost the Blairites, because of their delusion that voters from the non-existent ‘centre ground’ would flood in. The system was even heralded by Tony Blair, who described it as “a long overdue reform that I should have done myself”. 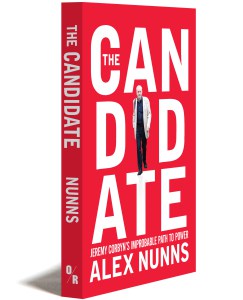