Is it consistent to oppose Brexit but support independence for Scotland and Catalonia?

Is it consistent to oppose Brexit but support independence for Scotland and Catalonia?

Anyone who saw on television the shocking violence which was meted out to people trying to vote in Catalonia on 1 October is likely to feel sympathy for them, and maybe to understand why they don’t want their region to be a part of Spain. Isn’t it also understandable that a large minority of Scots want to be independent from Britain? And what about the Brexiters who want to be outside the EU?

As a general principle, I don’t believe in referendums. They are a tool which dictators like to use, and they can offer a simple choice to very complex issues about which most people are fairly ill-informed, as in the case of Britain’s EU referendum last year. When we elect a government we know that we will get the chance to change our minds and throw it out after a few years, but the same is not true with a referendum. In a bruising interview last week, Eddie Mair asked Amber Rudd how long she thought the remit of that EU referendum would last. Could it be for forty years, as was the case of the previous referendum on that subject in 1975?

So why do I feel some empathy for both Catalans and Scots who want independence from Spain and Britain respectively? Nationalism isn’t very nice, is it? However, I would suggest there are essentially two types of nationalism. The first is the ugly sense of superiority as a nation, which then becomes a dislike or even hatred of foreigners and can often lead to wars. The second is the desire for a nation-state and sovereignty from those who, rightly or wrongly, feel they have been ignored and even suppressed in a quasi-colonial fashion. Why did the Scots have to suffer 18 years of the Tories after 1979 – and even have the hated poll tax imposed on them a year before the rest of Britain – when the vast majority of them never voted for Thatcher’s regime? Why should the Scots have to leave the EU when 62% of those who voted want to stay in?

Many Brexit supporters claim that Britain surrendered its sovereignty by joining the EU. Of course that’s nonsense; if Britain hadn’t had its sovereignty, it couldn’t have legally held that referendum on 23 June last year. Britain has always had a significant part in the EU decision-making process, something which most Scots have lacked when being governed from faraway London by the Tories. No doubt the Catalans feel they have a similar grievance. The Scots are subject to rule by a government located more than 300 miles away, while the Catalan capital, Barcelona, is 313 miles from Madrid. 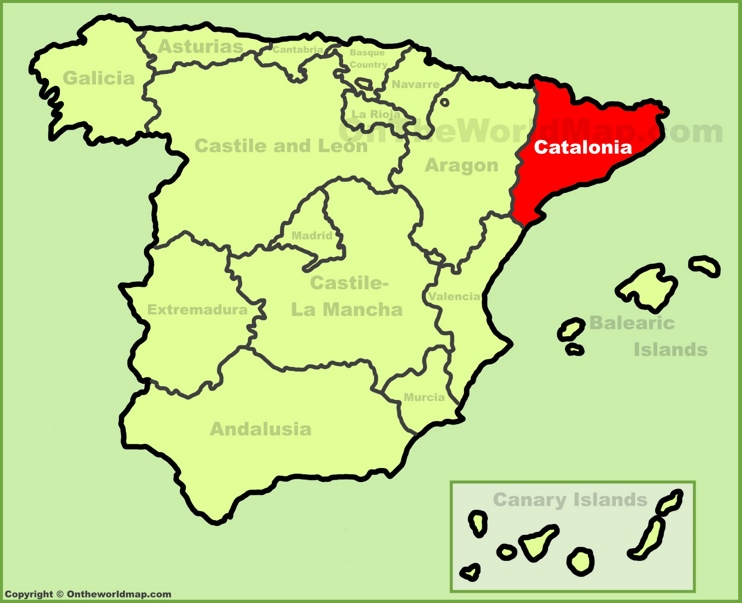 In 1714, Philip V of Spain captured Barcelona. Since then, Catalan nationalists have consistently pursued some degree of autonomy from Spain. By 1932, the region's leaders had declared a Catalan republic, and the Spanish government agreed on a state of autonomy. But when Francisco Franco emerged victorious from the Spanish Civil War in 1939, he systematically repressed all efforts toward Catalan nationalism. He tried to stamp out all Catalan institutions and the language, and thousands of people were executed in purges. Wounds like that take a long time to heal, if they ever do; try mentioning Oliver Cromwell (who died in 1658) to an Irish Catholic.

After Franco died in 1975, the fight for Catalan independence started again. In 2006, the Spanish government granted Catalonia ‘nation’ status and taxation power. However, Spain's constitutional court struck down that ruling in 2010, arguing that “while Catalans were a nationality, Catalonia was not a nation”. Like Scotland, Catalonia has its own parliament and some devolved powers (I note that bullfighting was declared illegal there in 2010).

Language is often a unifying force, and Catalan is the mother tongue of around 9.5 million people. It’s actually the 14th most spoken language in the EU. Catalonia makes up about 16% of Spain's population and accounts for about 20% of the national economy. In an argument reminiscent of the Brexiters’ complaint that the UK is a net contributor to the EU, many Catalans argue that their region has a tax deficit with respect to the Spanish state of around 8% of its GDP. In 2010 that amounted to €16,000,000,000 of Catalan taxes that were paid to Madrid and not reinvested in Catalonia.

A survey in July this year suggested that 49.4% of Catalans were against independence and only 41.1% were in favour. Had the Madrid government acted more diplomatically, the demand for Catalan independence might have been defused peacefully and democratically. Yes, holding a referendum (and yes, I’ve said that I don’t really approve of such things) is risky, as David Cameron can tell you, but that July survey suggests that one held in Catalonia without opposition from Madrid might have had a similar outcome to the Scottish independence referendum in 2014. However, does a referendum ever solve anything? Despite what Alex Salmond called “a once in a generation” chance for independence, demands for autonomy for Scotland have not gone away. Of course there are special circumstances: the Scots were told in 2014 that if they wanted to stay in the EU they had to vote to stay in the UK. But aren’t there always “special circumstances”?

If I lived in Scotland, I’d be tempted to support independence in order to be shot of the yoke of Tory rule from Westminster once and for all. If I lived in Catalonia, the recent violence perpetrated by agents of the Madrid government - with its echoes of Franco and his fascist tactics - would incline me to vote for independence. So is this inconsistent with my support for the EU and the ideal of a United States of Europe? I hope not. I don’t see any problem with having more sovereign nation states – Scotland, Catalonia, maybe Wales if the demand is ever there – but still inside the big tent of the European Union, where far smaller nations prosper (Luxembourg being the most obvious example).

Despite what Brexiters will tell you, few things are simple and, as H.L. Mencken reminded us, simple solutions are almost invariably wrong.

Not all residents of Catalonia are catalan. As in London, many people have been attracted from elsewhere in Spain by higher wages and better standard of living.

Until now, Goldman Sachs has run much of its European business from London, but it's been saying for a while that it will need to move its operations to the EU if Britain leaves the single market without a replacement trade deal in place. It has now leased eight floors of a new Frankfurt tower block which could soon accommodate 1,000 staff. At present Goldman Sachs employs 6,000 people in London and only 200 in Frankfurt, but it looks as if that’s all about to change.

If such an exodus happens it will make a total of 13,000 investment banking jobs lost to Britain because of Brexit, and if the Tory headbangers get their way over a hard deal, or even no deal at all, the number could reach 40,000.

Brexit fruitcakes have claimed that Britain, as a net contributor, has done too much to support other countries in the EU. Similarly, in Catalonia supporters of independence have argued that the region does more than its share to prop up the rest of the national economy and could thrive if it went its own way. Remainers say that Britain is stronger as part of the EU, just as opponents of Catalonian independence believe that the region is stronger as part of Spain. (An independent Catalonia would be expelled from the EU.)

The similarities to Brexit don’t end there. Hoping to minimise instability, nearly 1,200 companies have shifted their headquarters from Catalonia to other parts of Spain since the referendum on 1 October. Both Brexit and Catalonian independence are probably idiotic ideas, but the latter is perhaps more understandable. The Catalans have grievances dating from the eighteenth century, plus fascist repression by Franco for nearly forty years, and the heavy-handed response to the referendum at the beginning of this month can only have fuelled the feeling of injustice. Brexiters may spout claptrap about the ‘EUSSR’ dominating us from Brussels etc, but the fact is that Britain hasn’t been subjugated by anyone from Europe since 1066 and there is no valid grievance to justify the suicidal decision to leave the EU.

But the fact remains that turkeys in both Britain and Catalunia have voted for Christmas.

Democracy, but with an added thrill of danger as in The Charge of the Light Brigade.

Tally ho! Last one in is a cissy.

Many of the arguments rehearsed here over Brexit are re-appearing in Spain:

The right-wing Spanish government in Madrid probably over-played their hand by sending Guardia Civil goons to break heads in Barcelona, and now need to defuse the situation quickly. Basque separatists must be watching with interest from Bilbao, as presumably will all other autonomous regions of Spain. It might not take much for Galicia to ponder becoming officially part of Portugal, then where does it end?

Catalonia has declared independence from Spain, ahead of an expected vote in the Senate which will see Madrid seize the region's autonomous powers.