Christians and Muslims seem to think so as evidenced by Inquisitions and Jihads.

I am a Gnostic Christian and we have always seen it as part of our belief system to oppose immoral and evil belief systems. We are not pacifists but historically have done our ideological fighting with good arguments instead of violence.

We have also called on all good people to actively oppose religions and ideologies that they feel are immoral and not deserving of their respect. That is a take-off on the adage that for evil to grow, all good people need do is nothing. Gnostic Christians believe in spreading good ideologies.

Both Christianity and Islam, slave holding ideologies, have basically developed into intolerant, homophobic and misogynous religions. Both religions have grown themselves by the sword instead of good deeds and good moral arguments and continue with their immoral ways in spite of secular law showing them a better and more moral ways. Some of Christianity has adopted these better ways of late but Islam is lagging and fighting against ideological reform.

Jesus said we would know his people by their works and deeds. That means Jesus would not recognize Christians and Muslims as his people, and neither do I. Jesus would call Christianity and Islam abominations.

Gnostic Christians did call them out for their evils in the past, and I am proudly continuing that tradition and honest irrefutable evaluation based on morality.

In whatever belief system you follow, be it humanist, secular, atheistic or religious, does your ideology require you to fight other ideologies or religions you find immoral or harmful to society?

Please specify what ideology you follow in your reply.

I find it quite strange that Christian, Muslims and Jews can ignore the immoral ways that their God is shown to have in the Bible, Qur’an and Talmud.

If you have read any of the critical books on God, you will have seen God described with some rather disingenuous terms that, if applied to a man, would see that man executed by any moral government in quick order. The Buddhist saying that if you ever meet God, kill him seems quite fitting. Frankly, I think killing him without making him suffer for a time would be too good for him. If hell were real, that would be a better end for him as mankind would surely need to see that torture to gain real closure for God’s crimes against humanity. This aside.

I can appreciate the value for society of local churches, mosques and temples but cannot fathom why lying priests, preachers and imams try to sell their God as a good God, when he is obviously more satanic than Satan. Perhaps scripture speak at least one truth in that the whole world would be deceived by Satan and his lying preachers and imams. Not that I believe in Satan.

As a Gnostic Christian, my focus has been to try to become a Parfait, a perfected moral man, using the methods Jesus taught. It has been a long climb up Jacob’s ladder and apotheosis put me up one rung and I have tried to climb higher, but seem to have stalled due to my inability to find arguments that are persuasive enough to loosen Satan’s grip on the minds of Christians, Muslims and Jews. Their need of fellowship is stronger than their work on their moral sense and they stay in their religions even though they know that their God is immoral and not worthy of their idol worship. This Gnostic Christian truth is not a flattering epithet for God, which is likely what cause their destruction by Inquisition.

The truth hurts the religious even when given with a loving touch. I am not that good at that but have seen good honest lovers of Christ get verbally abused by theists. They think hate is motivating those who speak against their God even when love is the motivator. Hate is born of love, and the Gnostic hate of God is justified on moral grounds, and the attempted correction of a believers moral sense and their thinking is done out of love. They forget that that is how Jesus was and how that love driven expression of hate with what he saw around him almost got him killed at the hands of the Jews. So the myth says.

The fact that I have had many theists resist entering into moral argument of their God indicates that they know that their God is immoral. I can appreciate that once a person accepts the fellowship that his tribal nature seeks, and he can survive without having better morals, he is loath to jeopardize the comfort zone he has created for himself. The problem is that theists are living in self-deception and for one who seeks or has attained Gnosis, a deeper knowing of himself, self-deception is basically not allowed. That is why I have to bother fighting a fight that is almost un-winnable.

If you have an answer to the question I posed at the onset, please enlighten me as I am quite disappointed to see so many living in self-deception and without Gnosis, and following Gods who are demonstrably more Satan like than God like.

In the terrible days that we will face from environmental degradation that will soon be upon us, a new and moral God will be required and we presently do not have one.

I recognize that our tribal and fellowship needs are quite strong and a part of our basic instincts. Do you have any idea as to how we can break Satan’s hold on Christians, Muslims and Jews and change their fellowship and tribal needs to a need for a God with decent moral values?

Greggs have apologized for their choice of Advent Calendar: 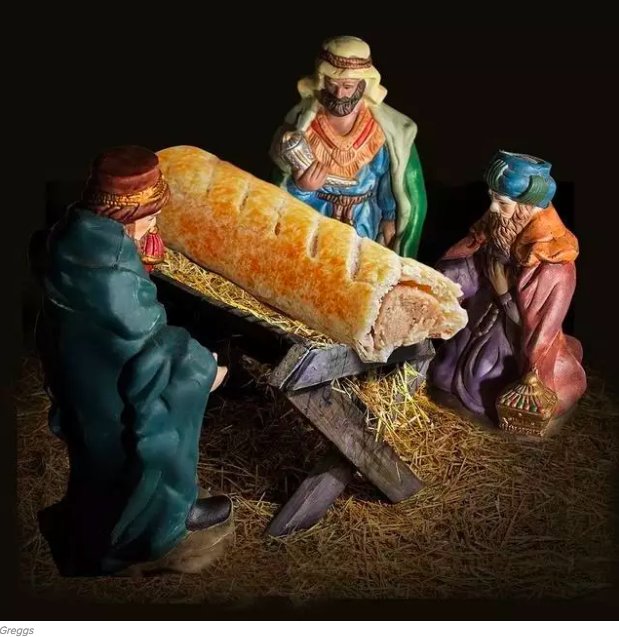 oftenwrong wrote:Greggs have apologized for their choice of Advent Calendar

Is a CornDog a crucified Sausage Roll?