The politics of envy and its causes

The politics of envy and its causes

I believe there is a direct parallel between the religious and left wing socialists, both think they own the rights to concepts such as social conscience and morality. It comes from an almost self righteous belief that they have a monopoly on compassion, empathy and altruism.

Since none of them have a clue about the facts of welfare or its intended purpose, I can only assume their hysterical opposition has an alternative psychological explanation, and this ulterior motive surrounds status.

In my opinion they hate the Tories more than they love the poor, in fact I think the poor is simply a smokescreen to hide their real contentions and intentions.

There is a condition called inverted snobbery:

a person who scorns the conventions or attitudes of his own class or social group by attempting to identify with people of a supposedly lower class.

This condition is a form of pretence, they pretend to represent the attitudes of the underclass, and yet know nothing about their attitudes. They distort words like working class to mean the poor and unfortunate to afford themselves VICTIM status.

Victim status then justifies their attacks on their real enemy, those with higher status than themselves, it is basically the politics of envy, its got nothing to do with altruism but everything to do with self status or self interest.
The underclass( the real poor and unfortunate) have accepted nature/nurture reasons for their lowly status, but for failed status seekers in a meritocracy there is no excuse.

Rather than just be honest and accept the high status of others affects their self status in a negative way, they hijack the real poor's victim status to justify their opposition and this gives them a higher status. They use the poor like a battering ram against the rich, oblivious to the obvious fact most including themselves are in the middle.

I have come to this conclusion because none of the Tory bashers know what benefits the poor get, in fact one had the gall to ask for a link that proves a married couples unemployment benefit was £212 per fortnight and child tax credits for 2 kids was £106 per week ?

If I am wrong I am prepared to listen to other plausible explanations, but I am never wrong.

tlttf wrote:
My apologies… for joining [the] club "Not an interesting original thought ever"…

You mean like you did as you “shot from the hip” with this masterpiece of disinteresting wastage?

… unfortunately… some simply come back with quotes and videos made by others, not one original thought goes into them yet some (on here) seem to assume that because a video has been recorded it must be the truth. Strange world we live in?

Why are you considering retiring roc?

tlttf wrote:
Why are you considering retiring roc?

Yep. It’s been a nice run, but I left LA Oil Company Inc. in good hands when I stepped down as Chairman and CEO.

Why do so many critics of those of us on the left assume we are consumed by class envy?

Extracts from an article by Owen Jones:-

"Anyone who thinks there’s a tad too much wealth and power in too few hands cannot win. Too poor, and you’re envious; too rich, and you’re a hypocrite; too young, and you’re naive; too old, and you’re a dinosaur.

There is an assumption that being on the left means contempt for people with privileged backgrounds. It isn’t, it should mean fighting against an indefensible distribution of wealth and power. None of us has any control over our upbringing. There are plenty of examples of those who fought for social justice, however pampered their childhoods: like Tony Benn, who renounced his peerage; Clement Attlee, who came to socialism after witnessing the poverty of Stepney; Paul Foot, educated at Shrewsbury College and was convinced of socialism by Glaswegian workers; and that Old Etonian George Orwell. The issue is how society is structured, not which parents you are born to. Socialism is nothing personal.

That doesn’t mean the left shouldn’t urgently champion working-class representation. There is a desperate need for people who have worked in, say, supermarkets or call centres to break into the political elite. The fewer working-class people in the Westminster bubble, the less likely that issues experienced by millions are likely to be addressed.

I have a simpler explanation.  The have-yachts need the jealousy of have-nots in order to make it bearable to put up with the type of person they socialise with at that level of society.

Once you obtain a certain amount of wealth, there is no such thing as "want."  There is no longer a goal of, say, saving up enough money to buy that new gadget or article of clothing. There is no more reward for working hard to acquire that which we would like to have. Everything is instantly obtainable and even expensive items can be bought on a whim.

So what is left to achieve once you become wealthy? The envy of others. This is precisely why there is a thriving market for over-priced trinkets that cater exclusively to the envy-seeking crowd. As such, one can purchase mansions - complete with air conditioning and crystal chandaliers - for your pooch or have your Rolls Royce plated entirely of gold. Nothing is too extravagant, nothing is too wasteful for those always trying to "out do" the millionaire down the street. It is why rich women carry purses that cost $8,000 but look no different than purses found at Wal-Mart; remember, it's the label that counts! People spend $60,000 on a single suit, spend millions on diamonds (which are only semi-precious anyway), and try to gain entrance into the most exclusive gated communities. It's all about envy to them - it's all about screaming in the faces of others, "Look what I have that you don't!"  Sticking one's tongue out like a school child is optional, of course.

The rich, and even the middle classes, want to keep luxury items out of the hands of those beneath them because how else can one walk with high noses past those less fortunate? How else can one measure one's superiority against another? And, by god, how can one feel superior if everyone, regardless of their jobs, has a Porche, a big screen television, and a cell phone? If a working class person toiling in a factory can afford the same nice things as a middle class person working in an office, what's the point of having what they have?

So it is then that the poor cannot criticize the gross excesses of the wealthy without being accused of envy. That is their entire basis of wealth acquisition - to be, feel, and act superior to those with fewer resources. It stands to reason that anyone who growls at wealth disparity is obviously simply envious and doesn't really care about the social problems that arise from a system that encourages wealth to flow upwards instead of disperse outwards to everyone.

You folks in Europe can take comfort in the fact that you have NHS. Here in America, even health care has been classified as a "luxury" fit only for those who can afford the exhorbitant costs of health insurance, medications, and the treatments themselves. Be thankful that you have that much, at least. In the States, there are far too many who believe that government-run health care is the first sign of a massive Big Government take-over of our lives and the precursor to the demise of freedom. What a heaping pile of trashy rubbish that is, but living in a culturally and geographically isolated nation allows for very effective propaganda and the spread of Goebbels' Big Lie. 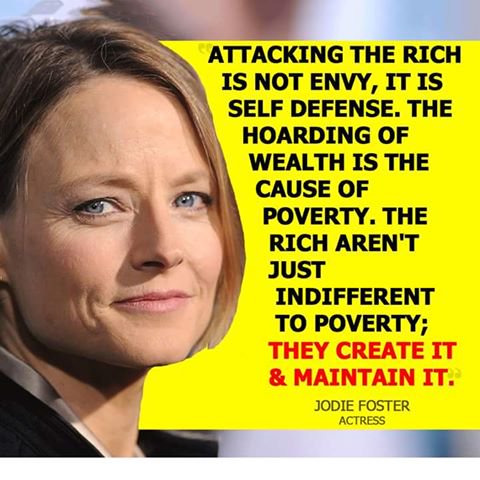