‘Princess Diana: The Evidence’ by Jon King and John Beveridge

‘Princess Diana: The Evidence’ by Jon King and John Beveridge

‘The Daily Telegraph’ has looked at a large number of conspiracy theories and asked:-
“Why won't this one go away? Despite an official inquiry that found no evidence of a plot by MI6 or any other entity to murder the princess and Dodi Fayed in 1997, fevered speculation continues. The theory is that rogue elements in the British secret service decided that Diana's relationship with Fayed was a threat to the monarchy and, therefore, to the British state. A plot was hatched in which a white Fiat Uno carrying agents was sent to blind and disorientate driver Henri Paul as he sped through the Paris underpass pursued by photographers. Later, Paul's blood was switched with a sample of somebody who had drunk a lot of alcohol. The trouble with the theory? Not a shred of evidence exists to support it.”
http://www.telegraph.co.uk/news/newstopics/howaboutthat/3483477/The-30-greatest-conspiracy-theories-part-1.html

‘Princess Diana: The Evidence’, written by the experienced investigative journalists Jon King and John Beveridge, was published in 2009. The authors insist that they were informed of a plot to assassinate Diana one week before her death. Their book is worth a read; it isn’t sensationalist, but it does pose a series of unanswered questions that might make you think twice, as it has me, about what really happened to her.

King and Beveridge mention that French paparazzo and MI6 agent James Andanson, owner of a white Fiat Uno identical to the one involved in the crash, was planning to publish compromising photographs of the crash scene in a book when he was found dead in his burnt-out car 400 miles from where he should have been. They point out that, according to the official UK investigation, Diana was unable to wear her seatbelt because it was “jammed in the retracted position”. Apparently, the Mercedes in which Diana died, the "only available car" on the night, was stolen at gunpoint prior to the crash, and its EMS – the onboard computer chip that controls the steering and brakes – was stolen and replaced. We’re told that 'the Boston brakes' is a known method of assassination by road accident developed by the CIA; it involves taking over the target vehicle’s steering and brakes by remotely controlling its on-board EMS.

The authors claim that the CIA possesses files revealing their complicity in the operation that killed Diana; these files are also supposed to reveal that the British establishment was concerned that Diana might have been pregnant with Dodi Fayed's child. Diana was illegally embalmed in order to cover up her possible pregnancy and the order to embalm her was given by a very senior British diplomat named in the book. However, Dr John Burton, who was one of only two people at Diana's post-mortem, told ‘The Times’: "She had only met Dodi six weeks before. Even if she got pregnant the first time she met him... he shook hands and got her pregnant, the baby would only be six weeks old at most. It doesn't stop everybody wanting to believe it."
http://news.bbc.co.uk/1/hi/uk/3376857.stm
Dr Burton is a former royal coroner, so is his evidence likely to be impartial?

We are constantly reminded in this book of why many people still believe that Diana's death was not an accident. All CCTV cameras lining the route from the Ritz Hotel to the crash tunnel were somehow inexplicably "turned inwards" on the night Diana died; thus no video footage of the journey or the crash exists. It took nearly two hours to get Diana to a hospital 3.25 miles from the crash scene, and that the ambulance "stopped for a further ten minutes" outside the hospital gates, having driven past at least one fully equipped hospital en route. The crash tunnel was swept clean, disinfected and reopened within hours of the crash, destroying crucial forensic evidence. Chauffeur Henri Paul, officially blamed for Diana's death, was a part-time intelligence agent who allegedly met with his intelligence handlers hours before the crash. The blood sample on which the official verdict was based was never DNA-identified, the blood tested was stored in a phial labelled “unknown male”, and carbon monoxide tests concluded that the blood could not have belonged to Henri Paul. Two senior MI6 officers plus Mrs Windsor's private secretary were allegedly present in the British Embassy in Paris on the night of the crash, and these officials reputedly ordered staff manning the communications room to leave. Diana's butler, Paul Burrell, was ordered by one of Diana's closest friends to burn the princess's blood-stained clothes immediately they arrived back in London, destroying crucial forensic evidence. (What sort of “close friend” would ask for evidence concerning your demise to be destroyed?)

Noel Botham also wrote a book on this subject, ‘The Murder of Princess Diana’, which was published in 2006. He claimed to have “unique contacts in the secretive worlds of intelligence and royalty” and to have “uncovered the facts that prove Diana was the victim of a professional hit squad.” If Botham – and Messrs King and Beveridge - have hard evidence, why isn’t this matter being pursued through legal channels, with a private prosecution if necessary?

King and Beveridge provide some more interesting quotes. Some people will dismiss Diana as paranoid, but in November 1995 she is supposed to have said: “Prince Philip wants to see me dead”. At about the same time, she wrote this to her friend Simone Simmons: “Dear Simone, as you know, the brakes of my car have been tampered with. If something does happen to me it will be MI5 or MI6 who will have done it. Lots of love, Diana.” She said to her friend Roberto Devorik in August 1996 that “they are not going to kill me by poisoning me or in a big plane where others will get hurt. They will either do it when I am on a small plane, in a car when I am driving or in a helicopter.” Just weeks before her death, Nicholas Soames, Tory MP and personal friend of Charles Windsor, telephoned Diana about her campaign against land mines and is alleged to have said: “Don’t meddle in things that you know nothing about, because you know accidents can happen.”

In a letter written ten months before her death, Diana said she believed a plot to assassinate her in a road traffic accident was being planned. The letter, owned by Paul Burrell and written by Diana in October 1996, reads: “This particular phase in my life is the most dangerous. My husband is planning an accident in my car, brake failure and serious head injury, in order to make the path clear for him to marry.” If Diana was so convinced that there was a plot to kill her in a road accident, shouldn’t she have been more cautious? Couldn’t she and Dodi have just stayed in the Ritz Hotel on that fateful night – after all, Dodi’s dad did own it! Would anyone planning to kill her have taken the chance with so many paparazzi in the vicinity? And would they have used a road accident, when that was the very way in which she was telling her friends she would be killed?

Diana’s death was very convenient for Charles Windsor, but that’s in no way to suggest he had a hand in it. Her death certainly made it easier for him to gradually make Mrs Parker Bowles acceptable to the British public and for him to marry her in 2005, more than thirty years after their adulterous relationship began. I never understood why he flew to Paris to bring Diana’s body back to the UK when he was no longer related to her.

‘Princess Diana: The Evidence’ is a disturbing book, but I still believe the balance of probability is that Diana was not murdered. If anyone in the Windsor family was of a mind to get involved in an assassination, the consequences of getting found out – the probable end of the monarchy and a long stretch in the slammer instead of living in opulence – wouldn’t make it worth the risk. And if they had really wanted to kill Diana in 1997, why not just blow her up and blame the IRA? A car accident does not guarantee a fatality. If Diana was planning to move to California with Dodi Fayed, surely she would have been out of the way anyway?

Former police chief John Stalker conducted an inquiry into the French investigation and believes the deaths were simply the result of an accident. Whenever there is an official enquiry into something or other, those who don’t like its conclusions will describe it as a whitewash, and this case proved no exception. As anyone who reads this forum will know, I’m no fan of monarchy, but I just don’t see it as very likely that Diana was murdered. As I made clear at the beginning, I don’t usually buy conspiracies, and for once I find myself in agreement with Sir Bernard Ingham (Thatcher’s former press secretary) who said: “Many journalists have fallen for the conspiracy theory of government. I do assure you that they would produce more accurate work if they adhered to the cock-up theory.” 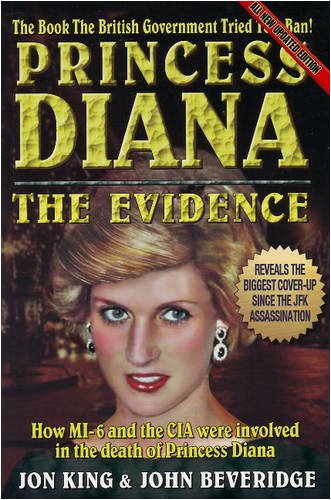