Has the International Monetary Fund betrayed its founding principles?

Has the International Monetary Fund betrayed its founding principles?

In June 2012, Peter Doyle, a senior International Monetary Fund economist, resigned and launched an attack on the organisation’s record and current leadership. In his resignation letter, he accused the IMF of suppressing warnings that the global economic system was heading for a crash in the years preceding the 2008 financial crisis. Doyle had worked at the IMF for 20 years but said he was now "ashamed to have had any association with the Fund at all". Meanwhile, the former Romanian Prime Minister Călin Popescu-Tăriceanu has claimed: "Since 2005, the IMF is constantly making mistakes when it appreciates a country's economic performance.” So is the IMF no longer the worthy and valuable international institution that it was once perceived to be?

The IMF was conceived in July 1944, when representatives of 45 countries meeting in the town of Bretton Woods, New Hampshire, USA, agreed on a framework for international economic co-operation, to be established after World War Two. They believed that such a framework was necessary to avoid a repetition of the disastrous economic policies that had contributed to the depression of the 1930s. The World Bank was also set up; that has the official goal of reducing poverty by providing loans to developing countries for capital programmes.

The plan was that the IMF would act as a global shock absorber, promoting economic policies that reduced financial speculation and market volatility. When a country looked as though it was falling into crisis, the IMF would leap in with stabilising grants and loans, thereby preventing crises before they occurred. It came into formal existence in December 1945 and began operations on in March 1947. Later that year, France became the first country to borrow from the IMF. But it was its lending to the four countries directly involved in the 1956 Suez crisis, and particularly to the UK, which raised the institution's profile and established its role in helping member countries cope with international financial crises.

After being re-elected in November 1956 – and having discovered the full extent of the British government’s duplicity in Suez – Eisenhower ordered economic sanctions against the UK. The US Federal Reserve orchestrated a run on the pound, and Britain’s gold reserves fell by a further £100 million in only a week (which was one-eighth of their remaining total). Moreover, the US Treasury made it clear it would block an IMF loan for the UK to stabilise the pound unless the UK withdrew from Suez. It did, and very quickly.

Tory supporters usually omit to mention that a Tory government had to seek an IMF loan in 1956, preferring instead to remind of us how a Labour government, struggling with the effects of the quadrupling of the price of oil and the double-digit inflation left behind by the Tories in 1974, asked the IMF for a loan in 1976. At that time, the UK government debt was 47% of GDP and the budget deficit was 7%. By the end of 1977, partly as a result of North Sea oil revenues, there were improvements in the balance of trade, so the UK did not need to draw the full loan from the IMF. Nevertheless, officials with the IMF made recommendations when they handed out loans; for the UK, this meant a change in policy orientation away from full employment and social welfare towards the control of inflation and expenditure.

The IMF went on to deal with other shocks to the financial system, including the financial crises in Mexico, Russia, and Asia in the 1990s, but it provoked criticism for a number of reasons. The recipient governments have to sacrifice policy autonomy in exchange for funds, which can lead to public resentment of the local leadership for accepting and enforcing the IMF conditions. Political instability can result from more leadership turnover as political leaders are replaced in electoral backlashes. IMF conditions are often criticised for their bias against economic growth and they tend to reduce government services, thus increasing unemployment. The IMF has also been criticised for its overt interference in domestic politics. In a South Korean presidential election in 1998, in which two of the candidates were running on anti-IMF platforms, the IMF refused to release money until it had commitments from all four main candidates that they would stick to the new rules if they won.

The IMF is unfamiliar with local economic conditions, cultures, and environments in the countries they are requiring policy reform. The Fund knows very little about what public spending on programmes like public health and education actually means, especially in African countries; they have no feel for the impact that their proposed national budget will have on people. American economist Jeffery Sachs observed that “the IMF’s usual prescription is budgetary belt tightening to countries which are much too poor to own belts".

The IMF clearly took a sharp right turn during the era of Reagan and Thatcher, when Milton Friedman’s ideas took precedence over those of John Maynard Keynes, and when the organisation was packed with zealous Chicago Boys under the leadership of the staunch neoliberal Michel Camdessus. ‘Chicago Boys’ are disciples of Friedman, so-named because they’ve been trained in the University of Chicago’s economics department where Friedman taught that economics should be treated as an exact science in the same way as physics and chemistry.

In The ‘Shock Doctrine’, Naomi Klein (p.183) talks of the IMF “sneaking privatisation and free trade into Latin America and Africa under cover of emergency ‘stabilisation’ programmes.” Davison Budhoo was a London School of Economics-trained economist who worked for the IMF for twelve years but quit in 1988, determined to expose the secrets of his former workplace. He claimed that the IMF invented huge unpaid government debts in Trinidad, which two independent studies found to be the truth; the IMF had inflated and fabricated numbers, with tremendously damaging results for the country.

Klein (op. cit., p.162) writes: “When countries were sent spiralling into crisis in the eighties, they had nowhere else to turn but the World Bank and the IMF. When they did, they hit a wall of orthodox Chicago Boys, trained to see their economic catastrophes not as problems to solve but as precious opportunities to leverage in order to secure a new free-market frontier. Crisis opportunism was now the guiding logic of the world’s most powerful financial institutions. It was also a fundamental betrayal of their founding principles.”

Friedman’s starting premise was that “the free market is a perfect scientific system, one in which individuals, acting on their own self-interested desires, create the maximum benefits for all” (Klein, op. cit., p.51). However, Friedman’s aim was a return to the policies that had prevailed before Roosevelt’s New Deal and which had caused the depression of the 1930s, the very thing which the IMF was set up to avoid!

In ‘Globalisation and Its Discontents’, Joseph Stiglitz, former chief economist and senior vice president at the World Bank, criticises these policies. He argues that by converting to a more monetarist approach, the purpose of the IMF is no longer valid, as it was designed to provide funds for countries to reflate their economies along the lines that Keynes had suggested. So is Naomi Klein correct? Has the IMF betrayed its founding principles?

It's far worse than that, Ivan. As 'Shock Doctrine' points out, the IMF is well-documented as doing much more than failing to flag approaching crises or using them to impose Friedmanite conditions.

The IMF is known (though not widely) to have deliberate engineered the collapse of a healthy economy in order to impose 'planned misery' measures: 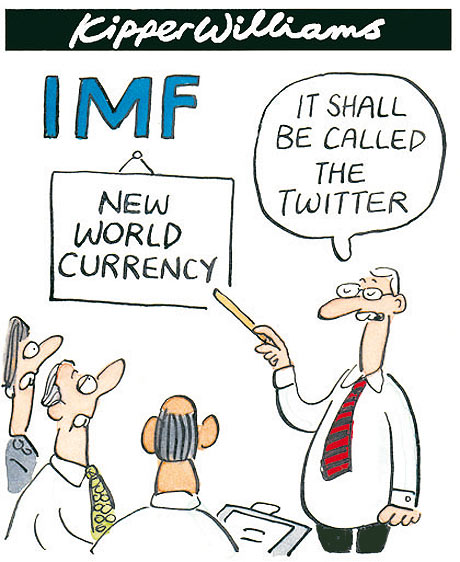