Is Theresa May the new Machiavelli?

Is Theresa May the new Machiavelli?

It was enjoyable to see the humiliation of Osborne and Gove, when they were summarily dismissed from the government, but what followed seemed bizarre. Theresa May’s first cabinet appointments saw the thoroughly undiplomatic Boris Johnson (who doesn’t seem to know the difference between Egypt and Turkey) become foreign secretary, and fellow Leave supporter David Davis, who thinks the border between the north and south of Ireland is ‘internal’, become the secretary of state for Brexit. ‘The three Brexiteers’ were completed with the recall of the disgraced Liam Fox to the post of trade secretary. So has Theresa May lost the plot already, or was she being Machiavellian?

Niccolò Machiavelli (1469–1527) was an Italian politician and diplomat who is best known for writing ‘The Prince’. He has occasionally been called the founder of modern political science, but he is infamous for describing immoral behaviour as being normal and effective in politics. As a result, the term ‘Machiavellian’ is often associated with political deceit and deviousness. Some have argued that it’s because of Machiavelli that ‘Old Nick’ became an English expression for the devil.

Machiavelli’s idea was that a prince needs to please both sides, the rich and the poor, even if that means telling them what they want to hear and lying. Theresa May’s speech when she first arrived in Downing Street contained promises to fight injustice and to help those who are “just managing”, comments which most us will take with a pinch of salt when uttered by a Tory. We know from bitter experience that Tories always feed the rich first and foremost and that everyone else ends up with little more than the crumbs.

In the EU referendum campaign, May came out for Remain, although she was invisible most of the time. Several of us remarked on Twitter that she was keeping a low profile so as not to offend anyone on either side, and thereby put herself in a strong position should a vacancy for Tory leader and PM occur. I’m sure Machiavelli would have approved of that tactic. Now, after a campaign of lies, xenophobia and promises that are impossible to square (such as ending free movement of people while still having full access to the single market), the country has narrowly voted for Brexit, Cameron has run away and May is expected to implement the decision.

So those three stooges have been handed the poisoned chalice of unravelling 43 years of British membership of the EU. David Davis is so thick that he told Dermot Murnaghan that Britain will get “a very, very large trade area, much bigger than the European Union, probably ten times the size”. A trade area that large would be twice the size of the global economy! Davis is so out of his depth that he thinks Britain can negotiate trade deals with EU countries separately, when they only negotiate as the EU. So has May set these clowns up to fail? After all, what makes ‘a good prince’ in the eyes of Machiavelli is one who figures out how to not take much blame when things go wrong……

Some of her other appointments can be seen in a similar light. Her opponent and Brexit supporter Andrea Leadsom, who tried to make capital out of May’s inability to have children, has been given the job of environment secretary, despite being a climate change denier, an opponent of wind farms and a supporter of foxhunting. It will be her job to explain to farmers what will happen when they stop receiving EU subsidies. And then we have the Brexit supporter Priti Patel, who in 2013 called for the abolition of the international development department, saying: “It is possible to bring more prosperity to the developing world and enable greater wealth transfers to be made from the UK by fostering greater trade and private sector investment opportunities”. Guess what? May has put her in charge of the very department she wanted to abolish!

Machiavelli’s ‘The Prince’ is a manual on acquiring and keeping political power. Is May seeing off any potential rivals (some of whom demanded that a Brexit supporter should be PM because of the referendum result) by giving them impossible roles, or ones with which they have no empathy? Only time will tell.

Theresa May insists that her well-ordered cabinet is right behind her...... 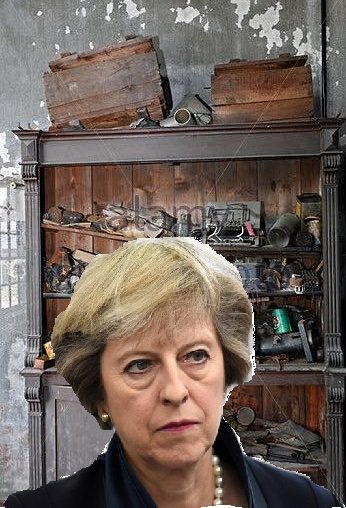 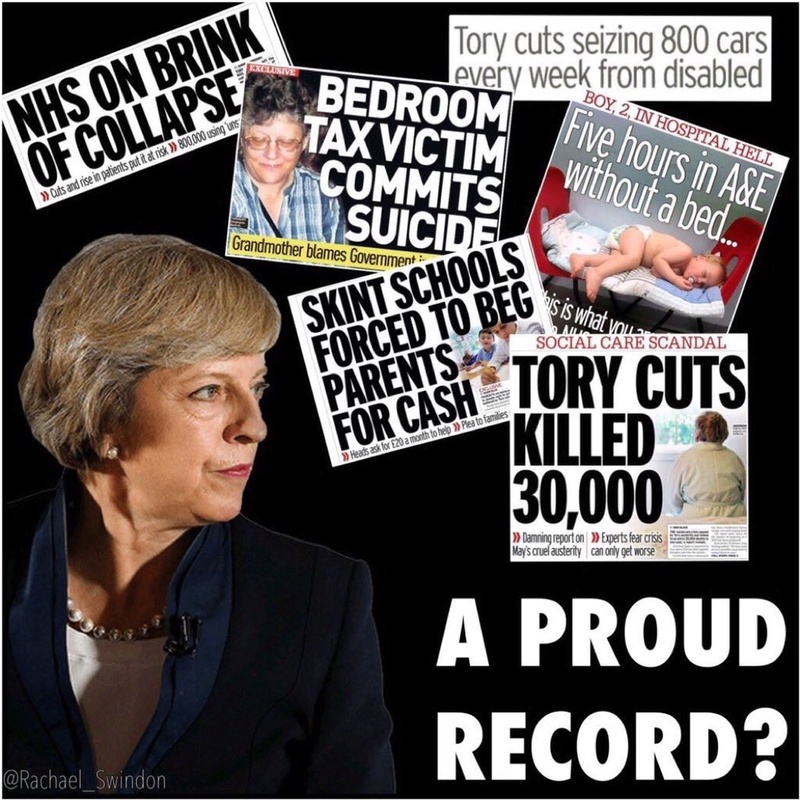 How did this question ever get asked? The previous PM was only ever there because he had a pretty face.

Mrs May is only there to fail. Understandably there were few other volunteers for that job.

Machiavelli? How could I ask such a daft question?

Six months ago, this incompetent woman was trying to sell herself to the electorate as "strong and stable":-

'Anxious' May 'begged for help' from Juncker

The comments reportedly made by EU chief Jean-Claude Juncker were published in the Frankfurter Allgemeine Zeitung after last Monday's dinner between the two. Mr Juncker had assessed Mrs May as being "anxious, despondent and disheartened" during the private meeting.

The Machiavellian outcome would be if the poor woman receives a sympathy vote from the EU on the Nation's behalf.

"Everything comes to (s)he who waits."

So the Tory Machiavelli has not been La May personally, but her "advisors" including that odd couple who recommended a damaging and unnecessary General Election, but also the Chief Tory Whip who has played an absolute blinder in discharging the task of appointing a new Defence Minister by selecting himself.

That boy will go far.

"This above all - to thine own self be true"

Things don't get any better for Mrs. May, but as today's Sunday Times articles reluctantly concur; the alternative could be a government led by Mr Corbyn. There is also a really funny article by Rod Liddle concerning a pharmaceutical pill about to be made available "over the counter". It may be an article which you may not want your wife or servants to read (as a learned QC commented in the Lady Chatterley prosecution). The pill is named in the Sunday Times (nearly an anagram of vinegar) but curiously seems unacceptable to this forum.

The comedian Mark Steel has provided an accurate explanation of why Theresa May is still in office: “She clings on, like the rust that stops an old car from collapsing, with each side of her party scared to give it too much of a push."

‘The Sunday Times’ is behind a paywall, so it’s difficult for ‘Cutting Edge’ members and guests to read much of it. As for the brand name of a certain product for erectile dysfunction, it’s not on the forum’s censored list but, as I’ve just found out, it does seem to raise a spam alert with the site owners, Forumotion.

We censor only a few words. For example, if anyone uses one of the ‘c’ words it gets changed to Jeremy Hunt. The other ‘c’ word is allowed, although the shortened version of Tory seems to be more popular with members.

For a keen insight into my thoughts at this juncture in the History of Great Britain, please refer to the avatar. 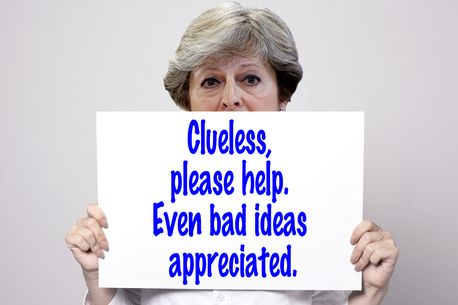 Has she remembered to tell the Tory Whips? 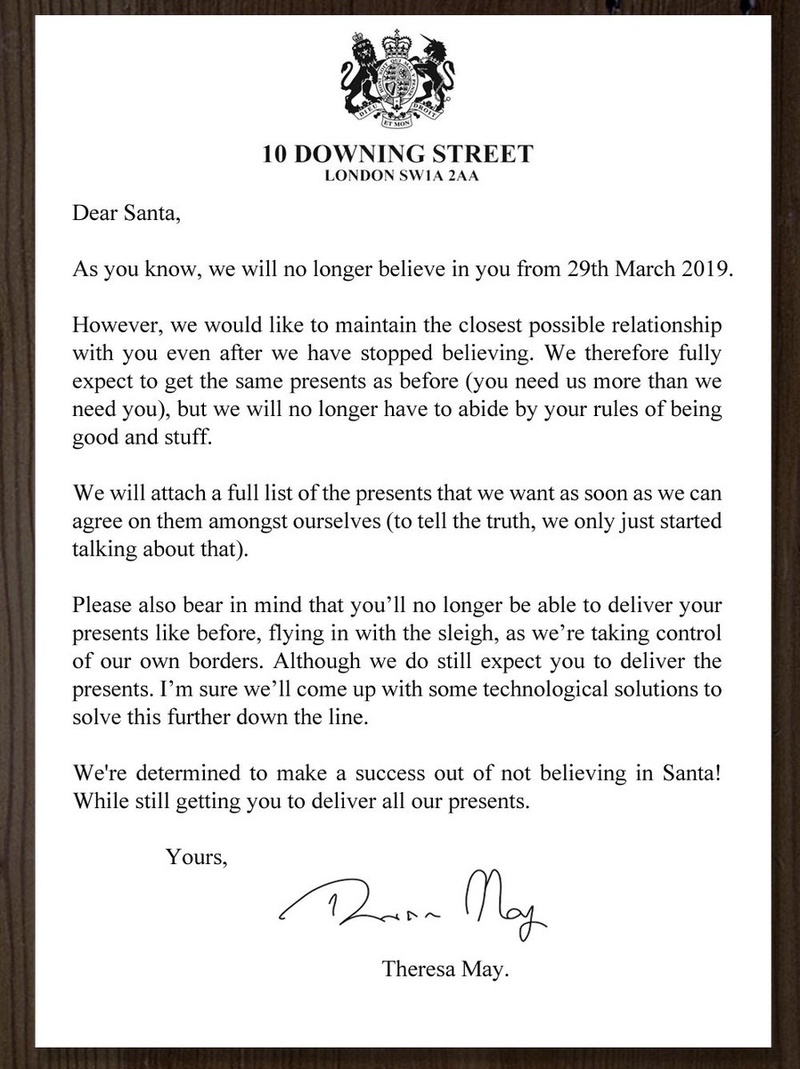 'Is Theresa May the new Machiavelli?' - as we've all now seen - she is just more female Tory cannon fodder, wheeled out to absorb the abuse after the boys have c*cked it all up

As Theresa May celebrates her Christian values in her Christmas message, here’s a reminder of her favourite Bible quotes (courtesy of David Schneider):- 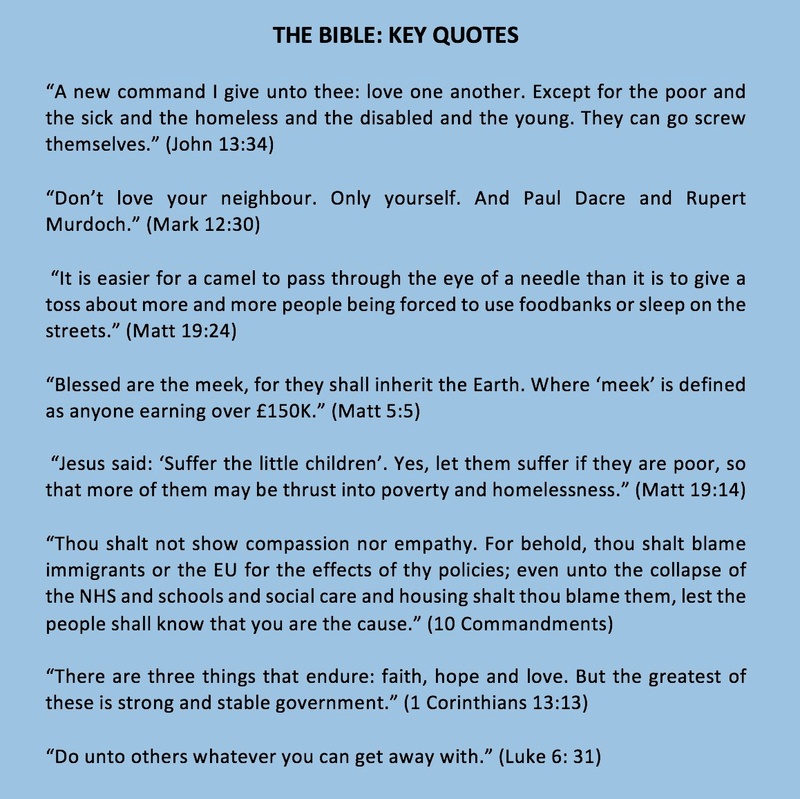 As always, A Christian message is so welcome at this time of year - I'm sure Mrs May will be meditating deeply on these themes as she eats her turkey and opens her no doubt sumptuous gifts