'Bread For All' by Chris Renwick

'Bread For All' by Chris Renwick

Everything you've ever wanted to know about The Welfare State.

BREAD FOR ALL by Chris Renwick

Thoroughly reviewed in The Guardian by Stefan Collini, this book describes the creation of The National Insurance Act and the National Health Service Act of 1948.

Everything you want to know about the welfare state

"Bread for all" by Chris Renwick Discounted 15% from

‘Bread for All’ sounds like a very interesting read and I shall certainly be buying a copy of it; I’m grateful for being made aware of its existence by this thread. However, the intention behind a book reviews board was that members would either write their own reviews of books  they‘ve read, or at least provide a synthesis of the reviews of others to whet our appetites.

Jon Cruddas, the Labour MP for Dagenham and Rainham, describes Renwick’s study as "a brilliant book, full of little revelations - my personal favourite is that Britain’s leading eugenicist also invented the dog whistle. It is written with real agility in an accessible style, and is bound to figure in 'books of the year' lists - it will in mine.” He says it “offers us a history of applied utilitarianism from the 1830s to the 1940s”. Cruddas continues that “Labour - including the current leader Jeremy Corbyn - is more the product of David Ricardo and Jeremy Bentham than Karl Marx and William Morris. The British Labour tradition was always concerned more with efficient resource allocation than a reordering of economy and society.”

However, in my opinion, it is the review by Chris Mullin, the former Labour MP for Sunderland South, which puts this obviously worthy book into its historical context:-

“Until the mid-19th century, most politicians and political philosophers were instinctively against the notion that the welfare of its citizens was any business of the state except maybe in the direst circumstances, and perhaps not even then. The late-18th-century philosopher Malthus argued that the poor law was an interference with the natural checks and balances on a growing population.

There were also arguments that will be familiar today about escalating cost, fecklessness and the undermining of the market, with the result that early social reformers sometimes found it easier to focus, not so much on the moral arguments, but on the suggestion that it was simply not efficient to have perhaps one-third of the population unable to make any meaningful contribution to the wealth of the nation if they were laid low by disease, malnutrition and lack of education.”

It’s hardly surprising that in the current political climate such a throwback to pre-Victorian times as the arch-reactionary Jacob Rees-Mogg is increasingly popular with Tory Party members, making it imperative that progressives fight to save and improve the welfare state. As Renwick explains, in the first half of the twentieth century, there was a growing realisation that through rational and purposeful intervention, government can remake society. We need urgently to rehabilitate that belief. 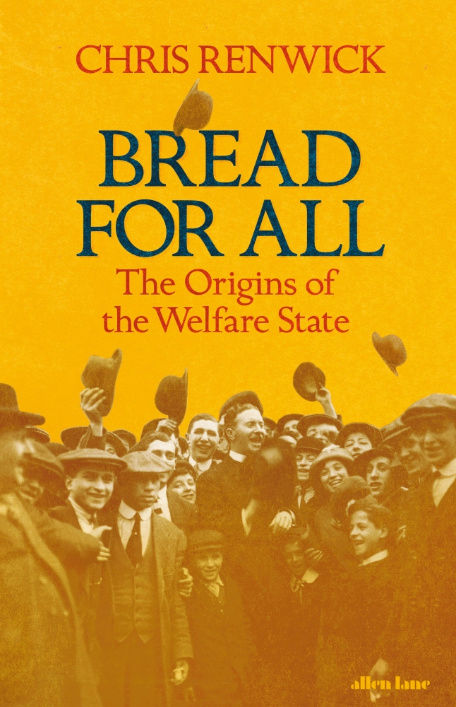 Fred Inglis, honorary professor of cultural history at the University of Warwick, reminds us that in 2017 the welfare state is mortally ill, and we all know who to thank for that (starting with Iain Duncan Smith). Inglis says that ‘Bread For All’ is a firm reminder of just how essential the welfare state is to all our lives.

I realise that we are in a grey area as to where quotation becomes a breach of copyright, but I don’t see a problem here. Credited quotations are acceptable in most forms of writing, and 6 lines from Mullin and 5 from Cruddas are well within our recommended maximum of 15 lines from any one source.

Under fair use rules, it’s possible to use quotations or excerpts, where the work has been made available to the public, as long as no more than is necessary is included, and the source of the quoted material is mentioned, along with the name of the author.
http://www.copyrightservice.co.uk/copyright/p09_fair_use

In this case, nothing has been quoted from ‘Bread For All’ itself as I haven’t yet read it, and posting a picture of the cover and the product details is good publicity and unlikely to offend either author or publisher. In fact, several authors have thanked me on Twitter for drawing attention to their works. I suppose there’s a remote possibility that Forumotion.com may see these reviews as a form of advertising, which is a compelling reason why they should involve discussion (and sometimes criticism) to distinguish them from a sales pitch.

Without even the faintest desire to labour the point, theft is theft.  Nicking a car is obviously a crime, but borrowing another person's ideas doesn't seem so bad - even at second-or third-hand - unless you are that other person.

In all conscience, if I see a book I like -  I will recommend it, and say so by providing a link.  Others are obviously free to follow that link or not, as they choose.

ensures I will be indicating little more than, "This caught my interest".

Please yourself of course how you deal with that.  Other opinions are easy to find on the internet.

Similar topics
» ‘Hardball’ by Chris Matthews
» Should immigration always be perceived as ‘a problem’?
» Can we save on fuel bills by swapping energy companies?