Is the United Kingdom doomed?

Exactly what I’ve been predicting for a long time. I said that if the Tories, so hated in Scotland that they have only one MP, came to power at Westminster again, the Scots would decide that they’d rather go it alone. Apparently, Scottish independence now has majority backing north of the border and in the UK as a whole, according to a new poll.

Research by ComRes for ‘The Independent on Sunday’ and ‘The Sunday Mirror’ found that support for the move had risen sharply over recent months. The results are a boost for First Minister Alex Salmond as his Scottish National Party prepares to hold its autumn conference in Inverness.

In the UK overall, 39% of those surveyed agreed that Scotland should be an independent country - an increase of six points since May. The number disagreeing with the statement had fallen four points to 38%.
In Scotland, the proportion supporting independence was up 11 points over the period at 49%. Some 37% disagreed - down by nine points.

The SNP, which won an unprecedented overall majority in May elections, has promised to hold a referendum on independence towards the end of its five-year term.

" There will be a many more who will wake up one morning to the reality..."

I believe that the type of person who voted to rid ourselves of all those awful foreigners- and all they stand for- will never admit their error and will either go blindly on , pretending that everything is just fine, or will adopt the 'Trump Card' by asserting that the downturn in the nation's fortunes has been caused by somebody rigging the economy to fail, so as to justify their doom-laden ( but accurate) predictions... 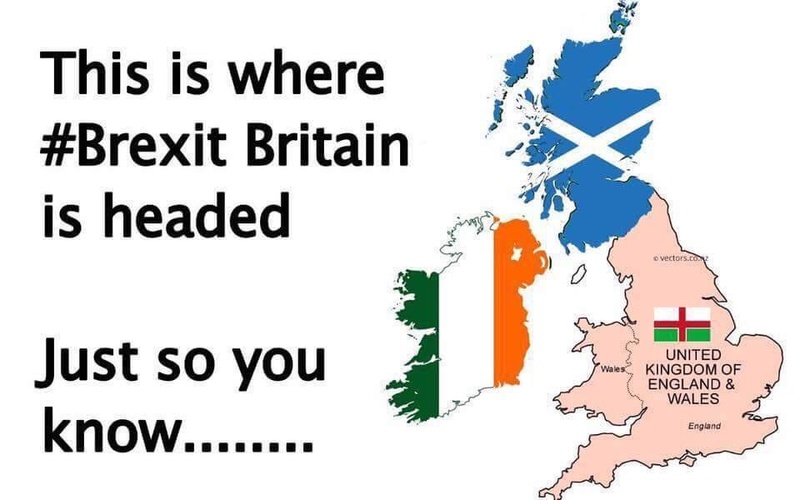 How can Britain exit the EU? As a nation state it doesn’t really exist

Extracts from an article by David Marquand:-

The UK is a distinctly odd state. It contains four nations, one far richer, more populous and more powerful than the other three. England contains almost 84% of the population, Scotland has just under 8.5%, Wales just under 5%, and Northern Ireland just under 3%.

The Blair government saw a Scottish parliament sitting in Edinburgh for the first time since 1707, and a Welsh assembly sitting in Cardiff for the first time ever. The Good Friday agreement set up a new form of “power sharing” in Northern Ireland. There are now four capital cities, four administrations and four legislatures in the once monolithic union state. In the last Westminster election, different parties won majorities in each of the four nations, for the first time in history.

The EU referendum has torn great holes in the underlying assumptions of the increasingly rickety union state. 2 of the union’s 4 nations voted to leave the EU; 2 voted to remain. Meanwhile the constitutional status of the referendum is in dispute. Since the UK is a parliamentary democracy, referendums can only be advisory. It is up to Parliament to decide whether or not to accept the advice. The union state is not a unitary state, still less an English state. It would be outrageous to force Scotland and Northern Ireland to leave the EU in defiance of the wishes of their peoples.

The Scottish government has every right to hold another independence referendum; equally, Northern Ireland has every right to rejoin the rest of the island of Ireland – a right guaranteed by the 1998 Good Friday agreement. The United Kingdom will be of past tense. To neglect this bigger picture in the months to come would be a monumental mistake.

For the whole article:-
https://www.theguardian.com/commentisfree/2017/jan/13/britain-doesnt-really-exist-exit--eu

I have a feeing that it is a 'monumental mistake' which will, nevertheless, be made...

"the type of person who voted to rid ourselves of all those awful foreigners" has always formed the majority of Opinion amongst Englishmen (who must now be referred to as "British" in deference to PC).

Even the slightest knowledge of English history confirms that most of it has been devoted to conflict with the French, the Spaniards, Dutch, Indians (in India), Africans, Russians and inhabitants of the Middle East.

We have only recently in the above calendar, adopted more conciliatory ways of extracting profit from Johnny Foreigner. We will probably continue to do that.

The United Kingdom will endure as such for so long as Westminster continues to pick up the bills in Edinburgh, Cardiff and Belfast.

Extracts from an article by Lesley Riddoch:-

“Government is not a platform from which to pursue constitutional obsessions”, said the Tory leader who is presiding over the economic and social nightmare that is Brexit, brought on by her own party’s constitutional obsession with Europe. Nicola Sturgeon should “get on with the day job”, said the PM currently presiding over an omnishambles in every aspect of civic society – prisons, hospitals, schools, you name it. Yet May has the audacity to lecture Scots about the quality of governance?

As for May’s claim that the Scottish government is focused on criticising Brexit – what else would it do when handed a mandate by its voters on a crucial subject such as Europe? Ignore the 62% of Scots who want to remain? What has been roundly ignored to date has been the Scottish government’s options paper which suggests ways to keep Scotland inside the single market, and which was presented to the British government in December.

The Spanish government says the only way citizens of Gibraltar can retain freedom of movement is joint sovereignty – so May is under pressure to devise an opt-out for the tiny enclave, where 96% voted to remain. And there is the delicate problem of Ireland – both sides of the border voted to remain in the EU, mostly because membership removes the vexed problem of an internal border. If there is a bolder geographical fix offered to Northern Ireland, Scotland will be the only important player left out in the cold. That’s why independence is becoming an option for many people who voted no two short years back – many on the back of a cast-iron assurance that the only way to stay in the EU was to stay in the UK.

For the whole article:-
https://www.theguardian.com/commentisfree/2017/mar/03/theresa-may-speech-scotland-brexit-independence

As always, it comes down to money. Could Scotland survive without the Whitehall tit to suckle upon? Well that may depend upon whether Brussels will immediately fill the gap - which it might. Could Ulstermen decide that their best bet might be a United Ireland within the EU?

The remaining hump of England & Wales in such circumstances might well prove much more nimble in business terms and become much fitter financially. (Probably at the expense of the working man, but what's new about that?)

There are smaller countries than Scotland in the EU, and if it did become independent and succeed in joining, it would probably be a net receiver from the EU budget.

George Eaton writes that "May would struggle to argue that Scotland should not leave its biggest export market while the UK does precisely the same":- 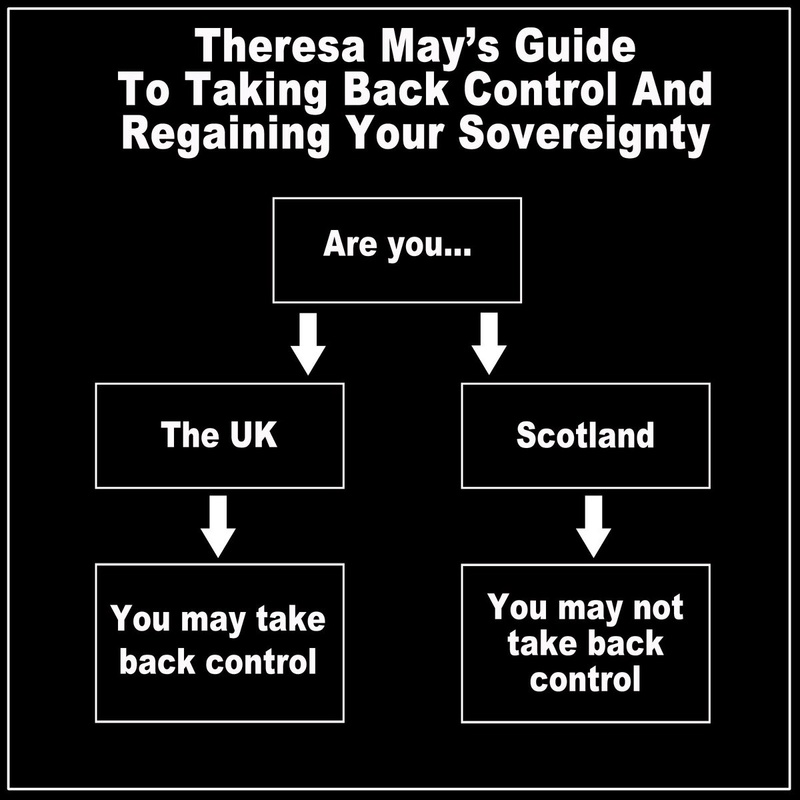 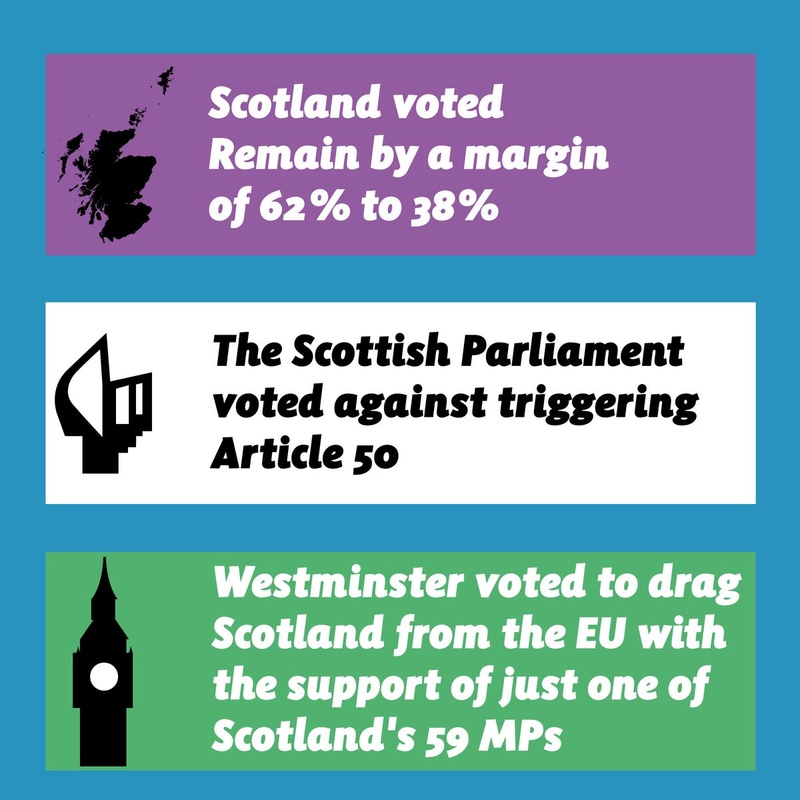 "The United Kingdom will endure as such for so long as Westminster continues to pick up the bills in Edinburgh, Cardiff and Belfast."

We might ask where it got the money from in the first place, but we see how little we get (compared with give to) London by the total lack of decent educational spending in 'Wales' revealed by the Brexit idiocy.    The Barnet formula has cheated us all through, and we'd be hugely better off as a small state of the EU than pissing about like this.   Remember we were treated as part of England for pushing six hundred years, and some of the richer bits were pinched entirely.

"The Environment" is sufficiently important to have its own Tory Minister, currently the egregious Gove, who has pronounced the Petrol and Diesel methods of propulsion as defunct by 2040. Electrickery and local councils will in the short term compensate for government unwillingness to tackle the problem of city streets where pollution has exceeded human tolerance. Dead people don't vote.