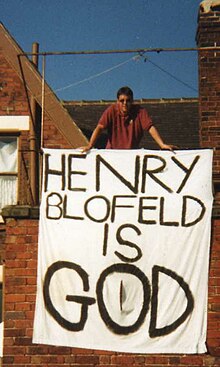 I thought I’d left out the biggest clue – he went to Eton and Cambridge but says he “failed both his final exams by an innings”.

Okay, who is this gentleman?

Born in Ulm in Germany, a Jew who was sent to a Catholic elementary school. He renounced his citizenship to avoid military service, was then stateless for five years before accepting Swiss nationality and gaining a teaching diploma in Zürich. In the course of his lifetime he also had Austrian and then American citizenship, and he died in New Jersey. He held socialist views and considered racism to be the USA’s "worst disease”.

One would need to be Einstein to answer such a poser...

Grrr.....it seems that this forum has more than one sage!

Let's try again. Where is this, and what happened here in August 1993? 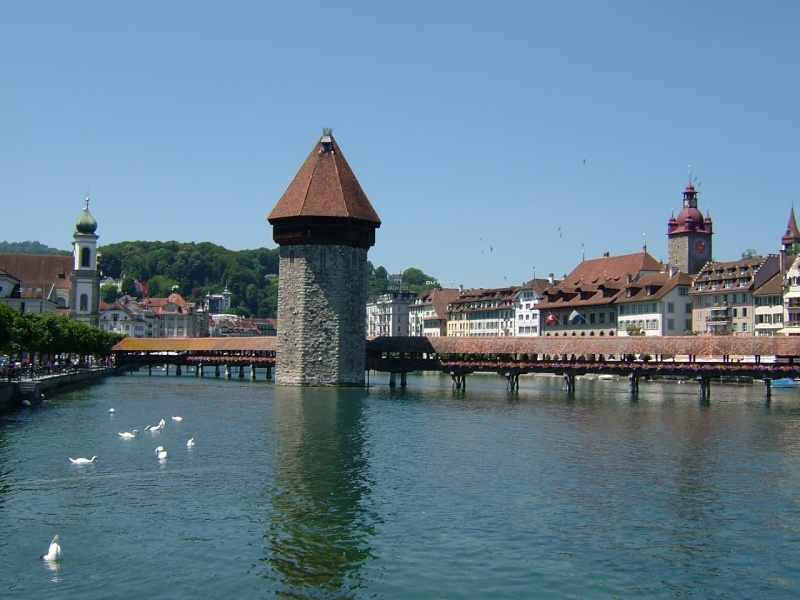 A crystal ball suggests it could be Lucerne in Switzerland where the Kapellbrucke Bridge suffered a hot reception in the stated year.

I have never been called a sage before - and there is a very good reason for that...

It only took ten minutes for that 'extremely difficult' question to be answered.....

One last attempt before I give up for today.

Where did I take this photo? Can you make a connection between this town and the American writer Henry James? 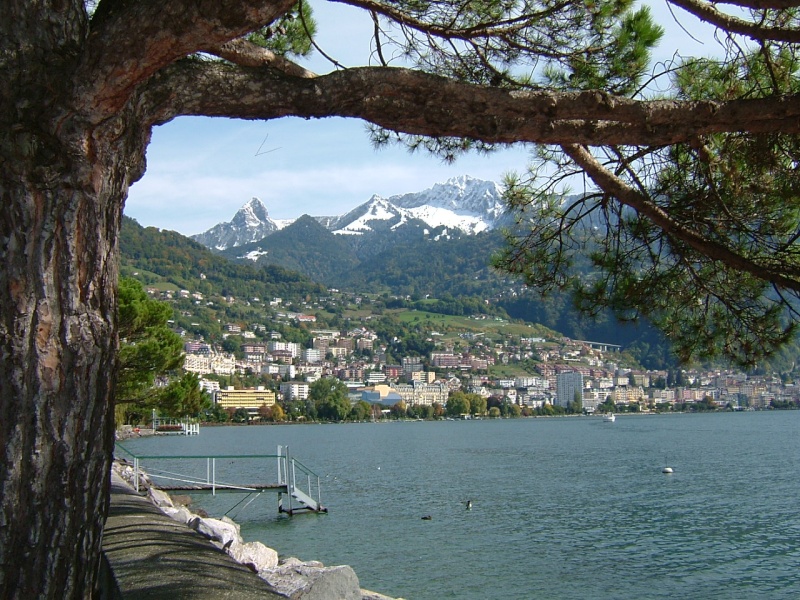 A wild guess  : Lausanne on Lake Geneva looking towards the Matterhorn.

( I'm not even sure if Lausanne is on Lake Geneva..)

Is there a 'Daisy Miller' connection here...?

Lausanne is on Lake Geneva, but this is not Lausanne. (You need to go to Zermatt to see the Matterhorn.)

The town in this photo does hold a big event every year for the first two weeks and three weekends of July. But don't forget to make a connection with Henry James!

Are we talking Montreux and its Festival?

And is the link with Miller that it was the Chateux de Chillon setting for his Daisy Miller?

And can we have a football question, please? - they are easier...

Phil. Yes to Montreux and its jazz festival in July. Montreux is only a 20-minute train ride from Lausanne and the journey is spectacular - with the railway line on the edge of the lake and steep vineyards on the other side. It should be a 'must' for railway enthusiasts such as yourself, especially if followed up with the Panoramic Express from Montreux to Gstaad, which climbs high above Lake Geneva.

Yes also to 'Daisy Miller', well done. I thought Lord Byron as a clue would have been too easy.

Football question? Here's an easy one! In April 1945, Hitler said that the German people had "betrayed" him. Who springs to mind when you read that?

Another "Hitler" in his own charming way, but Portuguese?

Mrs Hornby and my brother are regularly exhorting me to take a scenic European rail journey. My preference is for Scotland, which is probably tame by comparison. But, in any event, my passport has expired...

What's the connection of the late (and sorely-missed Catweazle) Geoffrey Bayldon with the PPCC?

He was the only one who looked like a vicar, suitably shocked by the terrible admissions he had witnessed.

What do you want - authenticity...?

I think we were expecting a "selfie" from you there actually, Author.

NB This is not a PM - it's a Public Service Announcement. Can we be clear upon that (like Mr Cameron always is)?

Did someone ask for football questions ?

Most are, in reality, quite 'gettable' for anoraks, with a couple requiring some further thought.

I feel ashamed now for how shallow my life has been...

Born in the Soviet Union, moved to Northern Ireland and then England. Took GCSE exams at a school in Cheam. Nearly drowned when diving in a lake near Heathrow. Had to undergo a medical procedure to have a live spider removed from an ear. Was once lowered from a 200-metre building in New Zealand at 60 mph. (Does that sound close to crazy?)

Call Off the Search

Very good, sir - and just how many bicycles are there in Beijing these days?

Err, the secondary common denominator is a Womble who could easily batt away, oooh, nine million such questions.

Please don’t mention Wombles – that makes me think of an old adversary of ours from Wimbledon….

Let me try again to produce a difficult question.

Space is very much in the news, what with Tim Peake and a new ‘Star Wars’ film, but who went into orbit in Oslo in 2010?

This must be Eurovision and Lena with her satellite.

Now, if you'll excuse me , I have to take another tablet and lie down after that cruel reminder of the boot variety...

A regular poster to Cutting Edge used a rather odd slang word in a recent posting, and I wonder how many other people saw it.

It is an anglicised version of the location in India used as a Transit Station whilst returning soldiers awaited space on a troopship back to Blighty - up to six months sometimes.  The place was hot, dusty and boring to the point of stupefication, so much so that the word came to be applied to anyone stupid or plain loony.

The place was possibly Deolali - or 'Dolally' - much beloved of Sargeant-Major 'Shuttup' in 'It ain't 'arf Hot Mum'. The best part Windsor Davies ever played...

Windsor Davies later confided that the show "had saved him from becoming a real actor."

However, for the Nicolas Parsons ever-important bonus point, can anyone say why doolally is frequently said with the word "tap" added after it? Wikipedia offers a Sanskrit origin, but there is an imaginative practical explanation that is very much in keeping with typical British emphasis of meaning.

A chap with whom I used to work - and who had lived in India as a lad - seemed to suggest in his many and varied stories that it was 'doolally tat' ( or was it my hearing?).

My only contribution - devoid of confidence - is to venture that 'tap' was a reference to tapping the temple to indicate the parlous state of mind.

A faultless performance, Art lies in concealing the artistry.
Speaking of which, it is a pleasure for everyone to see Andy Murray restoring British pride after seventy-odd years of tennis in the shadow of other Nations.  In the 1960s our dominating figure in Tennis was not a player, but dress-designer Teddy Tinling at a time when Wimbledon demanded that all clothing be white.  Teddy was also a leading light in British Tenpin Bowling administration, as one of the selectors for international tournaments.  He chose the man who became WTBA World Champion in 1967, and it was a long wait until the next British World Champion tenpin-bowler came along, Ryan Wilson in 2003.

So, what was the name of Britain's first World Tenpin Bowling Association Singles Champion, way back in 1967?

In the absence of genuine ability, a dose of lucky guesses is a reasonable substitute.

But luck can run out - as demonstrated by the most recent question over which I couldn't begin to make headway.

You could say I am skittled. But I know you wouldn't want to...

Once somebody has achieved a strike with the Tenpin Bowling teaser, how about this :

In order, a clue to the tenpin bowling question is that the 1967 World Championships were held in Malmo, Sweden.

The famous names could possibly all fit on a blue plate, but they may have one each.

Are we looking for a Mr David Pond?

Say more about the blue plates...

David Pond was indeed Britain's first-ever World Champion Tenpin Bowler, and remained so for many years. Regrettably that spectacular result in Malmö was to be his only claim to fame, substantial though it was. In 2014 his name was put forward for inclusion on the Tenpin Bowling Hall of Fame .

The request is for "More about the blue plates". The American version of plat du jour is often called a Blue-plate special.
The English Heritage version is usually circular but not always: 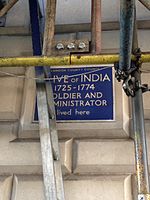 Richard Lion heart seems to have a black plaque in Oxford and a green one in Kendal. faites-vos-jeux

As always, an innovative response. And who could say it did not answer the question which asked for a link?

However, it was not the one actually envisaged, so what if I add another two names : William Shakespeare and Charles Dickens?

What's the connection between this building and a 1920s silent movie? 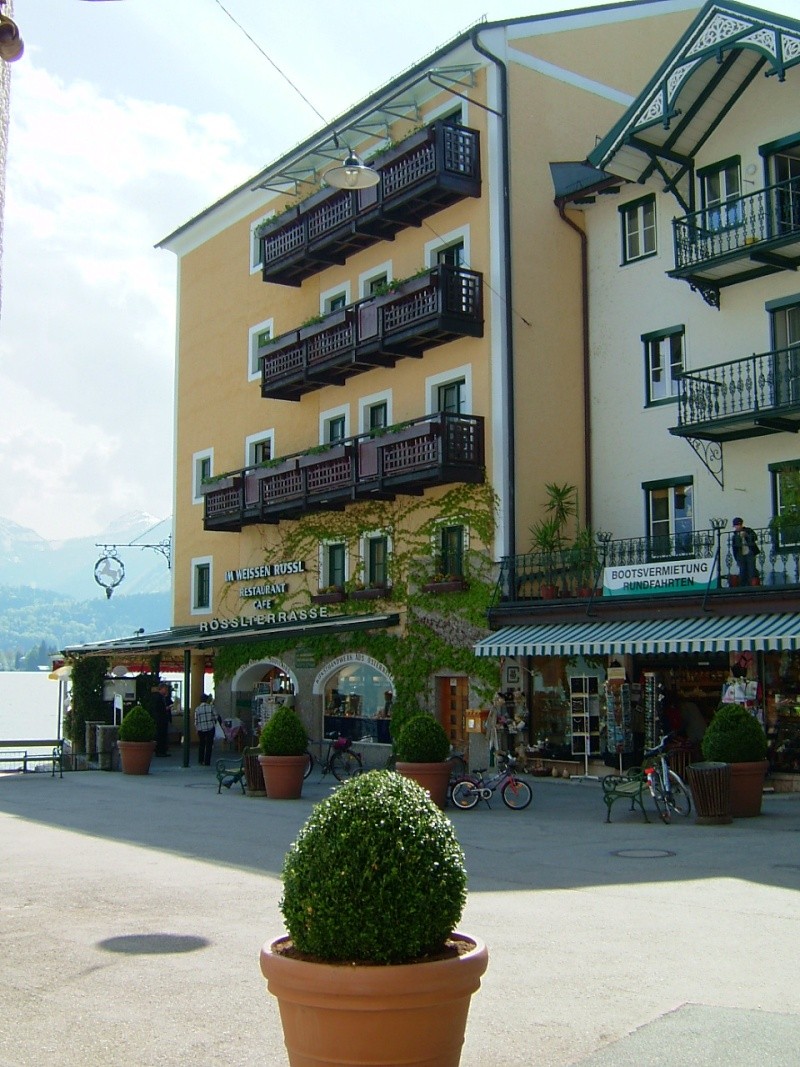 The White Horse Inn was the title of a 1926 German silent comedy film which was based on a play of the same name.

The picture is of - in translation -The White Horse Inn in St. Wolfgang, Austria., if I am wrong

Incidentally, if I'm wrong, I am happy to meet any of you in the White Horse Farm Inn at Rosedale Abbey, Yorkshire to buy you a pint in recompense for my speaking out of turn...

That would be a long way for us southerners to go to claim a free pint, but in any case we’re not entitled to it. Well done once again, sir.

The White Horse Inn in St Wolfgang dates from 1878, and a comedy in which it featured (with the head waiter trying to woo the widow owner) was written and premiered in Berlin in 1897. The story was revived as a silent movie in 1926, but it was marginalised in the 1930s because Goebbels found it “boring and superfluous”. It was revived in the 1950s.

I must say that I was underwhelmed when I stayed in the remote St Wolfgang, about 15 miles from the nearest railway station in Bad Ischl. There are many hotels in Austria (and Germany) which offer really good value for money – far more so than in England – but the White Horse Inn is not one of them. Even the indoor swimming pool was a con; the photos on the hotel’s website had a mirror on the wall to make it look twice its real size. If you’re tempted to go to that part of the world, I strongly recommend the Hotel Salzburgerhof in Zell am See – and there's a railway station!

And now for something completely different…… 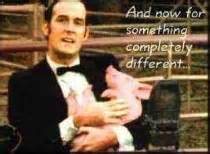 Nothing to do with Cameron; which former politician when on trial said that he had "lied in good faith"?

It takes me quite a time to get to Yorkshire , too -but it is worth it to get to Rosedale Abbey and its best pub!

I had thought that the quote was attributable to Johnathan Aitken - another proven liar - but this one is Bernard Tapie. As they would say at PPCC, he's a foreigner, so what can one expect?

Any takers on the link between the named individuals?

What's the name of this little town? 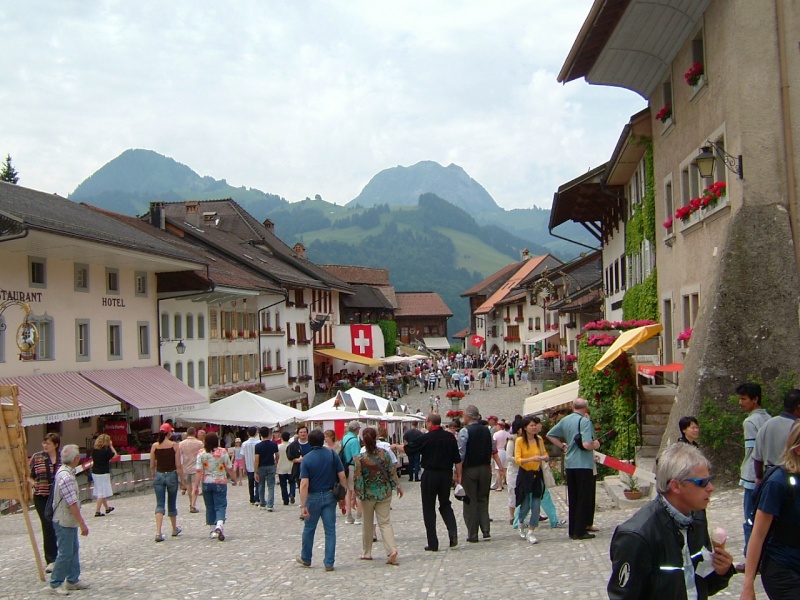