Apparently it was Ellina Kumari - but few would have known but for the internet.

Long life and happiness, little one...!

At the weekend I came across a man whose occupation I had not previously encountered; Biomechanist. (Spellcheck doesn't recognise it either). Evidently he is one of only 18 such in the UK, whose aim is to improve the lives of others.

What does such a person do, precisely?

It sure sounds like something to do with the movement of the body.

So, presumably someone who recommends how best to lift and carry heavy objects , for example?

Biomechanists are apparently in demand at somewhere like Loughborough, as they make a personal assessment of a particular athlete's physique so as to let them train in an efficient manner without going beyond the body's ability to benefit. Technical stuff, obviously, but also applicable to the elderly to avoid debilitation. 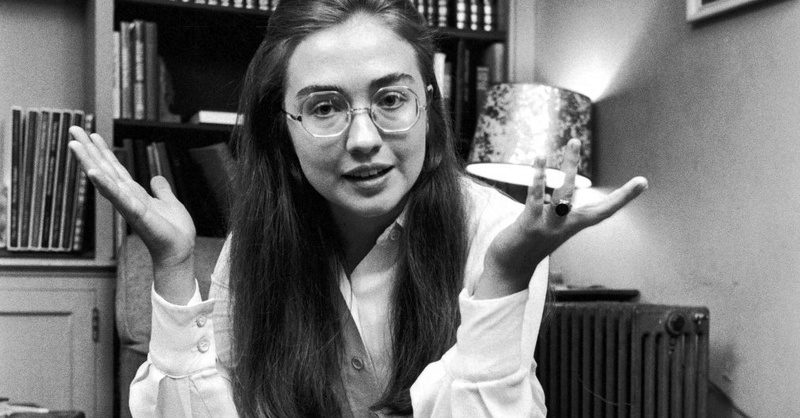 The eyes have a look of a young Hillary Rodham...?

On our side of "The Pond", which of the current government front bench had this picture taken whilst still a student? 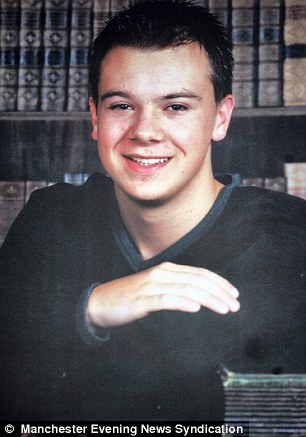 None of them...although one is familiar with the man pictured...

Oops! Can't really get more difficult than using the wrong picture. Normal service will be resumed as soon as possible. Apologies.

An illustrator is credited with a small part in encouraging the development of America's space program.  What's his name?

Was this Frank Paul?

He certainly worked in the field of science fiction art...

These illustrations are not by Frank Paul, though there was always competition between him and the artist in a similar field.

I've had a quick word with your Under-Butler, who tells me you are looking for Chesley Bonestell ...

Indeed! Cutler the Butler will be murmuring into his King Lears about confidentiality within the household, I dare say.

On this dark day for mankind, Donald Trump has been sworn in as the 45th president of the USA. However, he's not the 45th person to hold the office. Why is that?

He's not expected to be there long enough to matter?

Is this to do with FDR having a third term in office?

Or maybe Grover Cleveland having been elected twice with another incumbent in between?

It's Grover Cleveland, who because he won two non-consecutive terms as US president - in 1884 and then in 1892 - is described as both the 22nd and 24th incumbent.

I always found it a difficult question to try and figure out why Wilson departed so quickly in 1976...

Harold Wilson was only 60 when he resigned, but he already had the early stages of Alzheimer’s. I would bet on that being the reason for his surprise departure. Neurologist Dr Peter Garrard suggests that during his final months in office, Wilson was losing his distinctive voice – seen as an indication the disease was beginning to have an impact on his speech patterns.

I don’t think Wilson’s heart was in the job when, against all expectations, he found himself back as PM in March 1974 (surprise, surprise, the polls got it wrong!). He never moved back into Downing Street but stayed in office long enough to win the EU referendum in 1975, with 67.2% of voters choosing Remain - a somewhat more convincing margin than last year’s disaster. He then timed the announcement of his resignation to help Mrs Windsor bury the bad news of the breakdown of her sister’s marriage.

Wilson died in 1995, but his wife Mary is still alive, aged 101, and belongs in the Guinness Book of Records as the only spouse of a British PM to become a centenarian. His younger son, Giles, who I used to know and who took me into Downing Street to meet his father one Saturday after watching Tottenham play Arsenal, was last heard of driving trains between Waterloo and Guildford.

Leading the Labour Party must be enough to turn the mind of even the steadiest individual, in view of the unceasing criticism from within and without.

Can you make a link between silly poems with five lines, a 17th century treaty on which England reneged, and this football stadium? 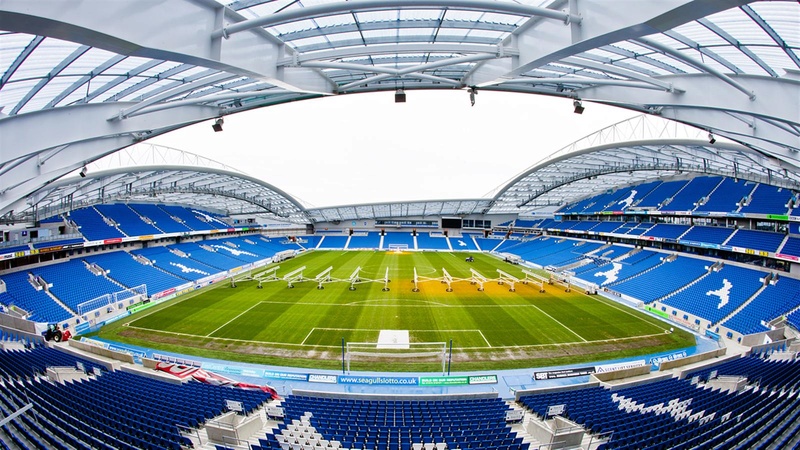 (Source withheld until the question has been answered!) 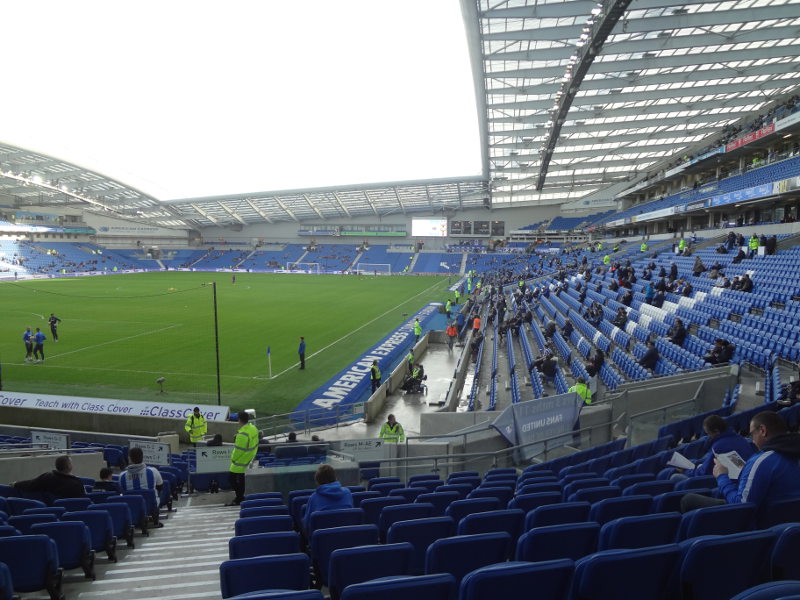 So what's the connection? What's the oldest known name of the island of Great Britain?

There seems to be a (Brighton and Hove) Albion connection somewhere here....but the overall link baffles me. There is a stadium in Limerick which has a similar architectural design to the Amex, but I doubt that can be what is demanded...

You're nearly there. Concentrate on England reneging on that treaty in the 1690s, and how such an event might be described by Anglophobes.

Are we talking 'perfidious Albion'? An example of perfidy would be the breaching of the treaty...

- Silly poems with five lines are called limericks.
- The Treaty of Limerick was reneged upon and became one of the many acts of English treachery referred to as "perfidious Albion".
- The photo (courtesy of www.seagulls.co.uk) is of the Amex Stadium at Falmer, the home of Brighton and Hove Albion.

Needed the clues - bit tough for me as it stood...

And mightie Albion, father of the bold
And warlike people which the Britaine Islands hold
- The Faerie Queene, Edmund Spenser

In Algebra, a constant is a number on its own, or sometimes a letter such as a, b or c to stand for a fixed number.
Example: in "x + 5 = 9", 5 and 9 are constants
If it is not a constant it is called a variable.

One class of engineers would be very familiar with the number 5252 as a constant in calculating one type of measurement from another related one.

What sort of engineer? What are they measuring?

I'll have to check if your Under-Butler knows anything about horsepower , revs per minute and torque - because I certainly don't....

Me neither, I was just reminded of them by reading about the Formula 1 poison dwarf finally getting the chop. Watch that space for some real excitement in the future.

For the totally baffled, an exposition (such a nice word!) follows:

For mechanical engineers building a car engine, there are a couple of questions to be answered before you begin: How much POWER, and how much TORQUE (oomph), followed by miles per gallon which is a figure plucked from the air.
Power equals revs times torque. If you know the torque that an engine produces at a certain speed, you can work out its power at that speed by using this formula. Similarly, if you know the power you can work out the torque, because torque equals power divided by revs.

Before you do this, however, you need a way of making the units match up. If you’re using revs per minute (rpm) for the engine speed (which you almost certainly will be), bhp for power and lb/ft for torque, you have to introduce the number 5252. For algebra fans, this is known as a constant.

The true formulas using these units are:

If you have the power and torque figures in different units you need to use different constants, but rather than remember several of those it’s easier just to convert them into bhp and lb/ft respectively.

(Remember the time element which is unimportant for torque but crucial for power? It’s supplied by the engine speed. Multiplying the torque by the rpm provides it for power. Dividing the power by the rpm removes it for torque. Also, you may already have worked out that an engine can produce the same amount of power in bhp and torque in lb/ft at 5252rpm, assuming it can rev that high, because the speed and the constant cancel each other out. This is just a trick of the numbers and has no other significance.)

Now we all feel better for knowing that, don't we?

Thanks - I hadn't appreciated it was all quite so simple.

As for Ecclestone, he will have more time to spend sitting on a toadstool with his fishing rod by his garden pond...

As we’re playing with numbers, here’s a little party piece you can use which will make you seem like an arithmetic genius…..

Ask someone to give you a three-digit number and tell them that you will multiply it by 7, 11 and 13 in your head and give them the answer within 10 seconds.

After that all that useless information, here’s a question involving a number…..

Ask a ‘Doctor Who’ fan to identify the phone number 07700 900461 and they'll say in a flash it's the direct line to the doctor, as mentioned in a 2008 episode of the television programme. But ring the number, and an automated voice says it's not recognised.

Have you ever watched a programme such as ‘Pie In The Sky’ or ‘Midsomer Murders’ and noticed a telephone number on a shop front or the side of a van? That will also be non-existent, but the dialing code is invariably the same every time – what is it?

The simple answer is "01632" but in fact Ofcom have fully provided for the potential requirements of fictional writing by reserving a series of numbers which will never be allocated to an actual user.  These include numbers for Britain's main cities; e.g. for London a TV soap can use (020)7946 ****.  If a Play needs to mention a mobile number it can be 07700 90****.

US Imports will often show a telephone number beginning "555".

I can't help feeling that there may be criminal uses for these "unallocated" numbers, or at least the opportunity for a company's complaints department to save themselves bother.

On the plus side they are an obvious choice if you are surfing the internet and are obliged to "register" to obtain information. You can avoid giving away your actual contact number if you'd prefer to remain anonymous.

Whatever happened to Whitehall 1212 - that's what I want to know...

Mention of Whitehall made me think of the board game of 'Monopoly'.........

Which property (English version) are you most likely to land on, and why?

(N.B. Jail doesn't count, and the answer is not Whitehall!)

Having consulted the Under-Butler at Oftenwrong Towers ( he tells me it's his afternoon off) I believe it may be Trafalgar Square, because the most likely score in rolling two dice is a seven which he tells me takes you adjacent to Nelson and his column.

But he did sound as if he'd had a tincture or two at lunchtime....