Having consulted the Under-Butler at Oftenwrong Towers ( he tells me it's his afternoon off) I believe it may be Trafalgar Square, because the most likely score in rolling two dice is a seven which he tells me takes you adjacent to Nelson and his column.

But he did sound as if he'd had a tincture or two at lunchtime....

Very good. The square you're most likely to be on is the jail, because apart from arriving there as a visitor, you can be sent there by a card (and without passing 'Go'). The most likely score in rolling two dice twice is 14, which lands you on Trafalgar Square.

On which property are you least likely to land?

My dice have just rolled under the table, but the Under Butler saw this question before I did so has blown the gaff (whatever that means) on it by murmuring "Old Kent Road" out of the side of his mouth as we passed in the hallway. Where does he get such curious habits?

Your Under Butler has made an intelligent guess there. As everyone starts from 'Go' using two dice, it's impossible to land on the first property on your first time round the board. That means your chances of landing on Old Kent Road during the course of the game are fractionally below average, but it's not the least likely property to receive a visit. 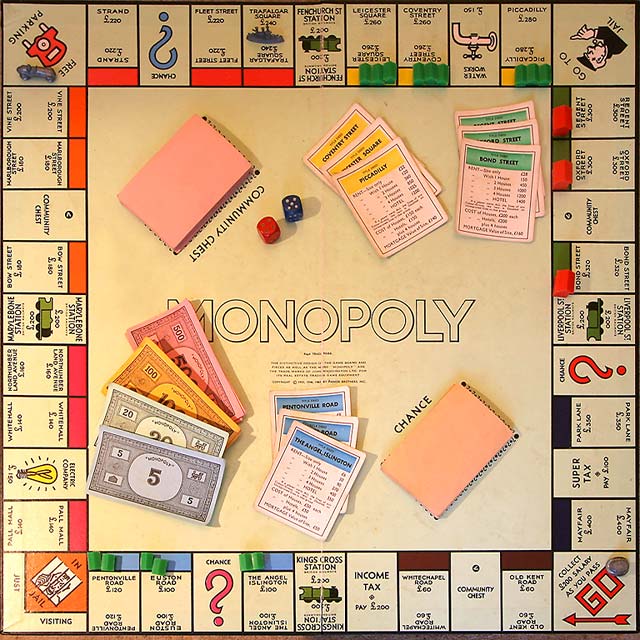 Applying the logic of the first answer, i.e. that you are likely to be re-starting from Jail, Pall Mall cannot be a valid target, since two dice cannot produce a move of only one place. (Though the Under Butler has shown us dice that he bought in Thailand which will produce any number you like).

en passant
Why did the game's manufacturers withdraw "the shoe" as a player-token, and with what did they replace it?

I can only imagine that this may be symbolic of few people actually walking anywhere anymore and that the replacement must be something electronic like a mobile 'phone or an I-pad ?

Unless it is a tasteful model of Theresa May holding Trump's hand, of course...

Pall Mall is another intelligent guess - and again the chances of landing on it are fractionally below average - but it is not the answer.

I'm torn between The Old Kent Road and The Angel...

Probability theory, a branch of mathematics concerned with the analysis of random phenomena. The outcome of a random event cannot be determined before it occurs, but it may be any one of several possible outcomes. The actual outcome is considered to be determined by chance.

Boiled down, anything has a 50/50 chance of occurring:  Heads or Tails; Win or Lose; Live or die; succeed or fail.  We're told that the odds against winning the Lottery are billions to one, but that doesn't appear to impede the sale of tickets.

(en passant) The makers of Monopoly "consult the public" about essentials like the shape of the tokens - because it gets them free publicity.

Sorry for taking so long to reply, but my PC has become unusable by a trojan that knocked out both Norton Antivirus and Malwarebytes. Until I can get a replacement, a friend has loaned me a laptop.

Probability theory can be very annoying. If you hear that there is only a 1 in 10,000 chance of contracting some nasty illness, it’s hardly consolation if you’re the one – it’s 100% to you. And yes, if some of us from Cutting Edge sat down for a single game of ‘Monopoly’, the outcome probably wouldn’t be affected by the fact that Trafalgar Square (Illinois Avenue on the American version) is the most visited site on which there is property; there’s even a Chance card which tells you to go there. (There’s also a Community Chest card which tells you to go back to the Old Kent Road, which is why that isn’t the least visited site.)

For anyone still awake by now, the ‘poshest’ section of the board doesn’t get so many ‘hits’. If you start from the most visited site, Trafalgar Square, two average scores of 7 will land you on Super Tax. A score of 6, almost as likely, will land you in jail. However, Mayfair does have a couple of advantages. Firstly, if you land on the Community Chest site just past Go, you might be invited to “pay a fine or take a Chance”. If you choose the latter, you could be invited to go back three spaces. Another Chance card says “advance to Mayfair”. Therefore, Park Lane (or Park Place on the US board) is the least likely street to be visited.

With apologies. Maybe this thread should be renamed 'extremely boring quiz questions', but at least it makes a change from talking about Trump and Brexit all the time!

Thanks for the explanation, Ivan. Took our minds off the resurrection of the Dirty Digger for a few moments anyway. 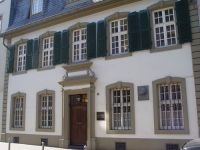 1. Where is this?
2. Who was born here?
3. A very unpopular American First Lady was born in the same year. Who was she?

The Karl Marx House is the writer's birthplace, now a museum in Trier (Rhineland-Palatinate, Germany).

Well would you believe it! Two First Ladies born in the same year.

I've no reason to think Angelica Van Buren was "very unpopular"; the answer I was anticipating was Mary Todd Lincoln. (And we never did find out if she enjoyed the play.)

Mrs Van B upon becoming First Lady apparently entered into the spirit of the Presidency with a bit too much enthusiasm. For a reception she had a dais erected in the White House from which to survey the ordinary people. It was soon dismantled. Well, she was only 20 years old.

Which actor was made an honorary member of two Kent police forces in the 1950s?

It surely has to be Jack Warner - aka Dixon of Dock Green...

Evening, all.  'Stanley Holloway? Dixon of Dock Green' - as unlike today's Police Procedurals on TV as anything you could imagine. Far too slow to keep up with Difficult Questions.

Jack Warner was made an honorary member of the Margate and Ramsgate police forces for his leading role in ‘Dixon of Dock Green’. It ran for 432 episodes between 1955 and 1976, by which time ‘The Sweeney’ had appeared on our television screens and was presenting a very different (and probably more realistic) picture of policing in London.

Brown Boots, is all I'll say.

Here are the football results :

Offside! Not the answer for which I search, I'm afraid. And what was the basis for the suggestion, I wonder? Was it detected that Sheffield United and Southampton did also play each other on that same date in 2014? Just a coincidence , if so.

Either the Under-Butler is not concentrating fully, or else he is given insufficient time-off to keep his football knowledge refreshed.

Or is it just about football...?

U-B's best alternative answer to what happened next is: "Smoked-salmon sandwiches in the boardroom." But I fear he's losing his concentration, what with all this talk of repatriating immigrants.

Obviously a clue is required to give some 'extra time'.

So maybe the answer is Charlton's win over Burnley in the 1947 Final, after losing to Derby in the Final in 1946?

As the clue suggested, all of those victories took longer than 90 minutes, either requiring extra time or a replay (in the good ol' days before penalty shoot-outs).

Really well thought-out answer - and more complex than the answer I am looking for.

Ok - the next result is Blackpool 4 Bolton 3.

Surely the reason is now obvious...?

First Cup Finals for four different monarchs? (Mrs Windsor stopped going to such events in 1964, but still manages Epsom and Ascot; nice to be able to pick and choose what 'work' you do.)

Which will be the next in the sequence, one wonders...?

I had discounted that theory several days ago because George V's coronation took place at Westminster Abbey on 22 June 1911.

Acquaintances have on occasion referred to me as The Department of Useless Knowledge, but I know when I'm being outclassed.

In which case I owe everyone an apology!

Most people are interested in food, there are more cookbooks in the English language than poetry anthologies.  Gourmets are prepared to travel in search of new taste sensations, so where would you be if the offering in a Michelin-starred restaurant might include:
Fermented lamb on reindeer lichen with mushroom cream?
Also on the Menu you could have chosen the seafood option: 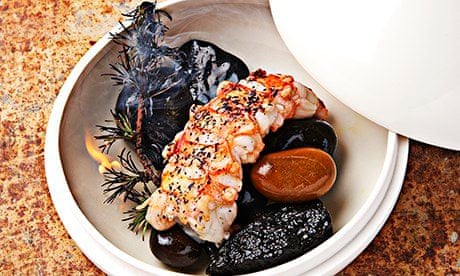 Where in the world?

The mere mention of reindeer lichen suggests the Artic Circle might be involved.

Good opener, but closer to home, not actually within the Arctic Circle.

In the location, they call a leg of wind-dried, aged and fermented lamb, skerpikjøt.  According to a restaurant critic,  Skerpikjøt has a feisty reputation. It's generally handed to the foreign visitor with a warning. It has the sort of pungent odour you can smell through a closed door. The meat is that dark red favoured by Francis Bacon, marbled with greyish fat. The taste is gamey with a hint of gorgonzola, the texture leathery like serrano ham.

You're probably already talking to your Travel Agent.

Surely, Denmark then, given the funny 'o' with the line through it.

( Sorry if that was too technical a description...)

You are getting warmer, though the location is not "warmer".

Maybe not Denmark, but part of the Danish kingdom, somewhere between Norway and Iceland? One of those places that gets a mention in the shipping forecast, and whose football team lost to Switzerland in the World Cup qualifiers a few months ago?

I somehow omitted to mention the football, but a location that was garrisoned by the British military during WW2 "for mutual defence". From which experience the locals acquired the taste for "a nice cuppa tea."