Who is right about the British economy?

Who is right about the British economy?

As Lloyd Grossman would say "lets look at the evidence"

26th January 2010 - this was the date that the UK recession was finaly over, our growth returned back into the black again at 0.1% later revised upwards to 0.4%.

The begining of 2010 has seen some improvement in the uk housing market. People's confidence seems to have returned to pre uk recession levels.(Zoopla.co.uk)

In the second quarter of 2010 the economy of the United Kingdom was growing at 1.2%, the fastest rate of growth for nine years.

By July the new coalition government had been in power for a couple of months, the chancellor gave his first budget and the nation was put on alert for the waves of spending cuts and redundancies which were to follow soon.

Towards the end of 2010 UK growth began to go backwards again, and actualy went back into negative growth in the 4th quarter, perilously close to recession again.

So here we are in October 2011, 19 months after this government entered office and our growth figures are lower than what they were when they came to office in May 2010.

But not only is growth stagnant, unemployment is higher, inflation is higher, confidence is lower, no sign of a recovery in the housing market, and the promise that the private sector can take up the slack of the thousands made redundant hasent happened.

As we approach the 18 month mark, is time begining to run out for David Cameron and George Osborne. ?

Then what happens to the money paid by the Franchisees to Network Rail for use of the rail network?

Network Rail is funded partly through a direct grant from the government (£3.8 billion in 2015/16) and partly by train operating companies paying access charges to use the rail network (£1.6 billion in 2015/16). In 2015/16, it spent £3.1 billion on renewals (renewing existing infrastructure back to how it was when new) and £3.2 billion on enhancements, with the rest spent on maintenance and other costs.[36]

Sorry if replies are delayed. Busy at the moment.

Two decades after the world’s oldest railroad was privatized, 14 of 19 major U.K. franchises are at least partly controlled by government-owned operators from mainland Europe. Even as the split from the EU looms, Rome-based Trenitalia SpA is planning the biggest raid yet with a bid to run the 55 billion-pound ($71 billion) High Speed 2 line between London and northern England.

Who is right? Even Mrs. May seems to agree with Labour policy. Adam Boulton writes in The Sunday Times:

"Why vote for a Tory pastiche of left-of-centre preoccupations when Corbyn is offering the real deal? Polls show many of his ideas are popular ... in tune with modern times. A majority would like to go further, supporting rail re-nationalisation for example."

Rail privatisation was part of a move to a corporatist UK economy that enabled private businesses to make 'profits' out of natural monopolies that remained heavily subsidised by taxpayers and/or service users.

Railtrack was allowed to buy British Rail property at well below its true market value, a fact borne out by its stellar share price growth in the early years following 'privatisation'. To maximise profit, it cut back savagely on investment culminating in several catastrophic train crashes. These are ultimately what brought the company down and led to the creation of 'not for profit' Network Rail - a classic Tony Blair 'Third Way' fudge.

Network Rail was meant to be a not for profit company operating in the private sector. All went well until 2014 when the Government was instructed to reclassify it as a Government organisation and to transfer its circa £34bn debt mountain back onto the taxpayers' account.

I won't even start on Branson et al. Who said the Great Train Robbery happened in the 60's?

My point is, extend this out through energy, water, telecoms, mail etc etc and we are looking at a vast transfer of wealth, assets, accountability & control from public to private corporate hands.

Corporations like banks, SERCO and G4S are considered to be too big to fail even though they have patently failed many times to act in or serve the public interest.

Unbreakable bonds have been formed between the political elite and corporate UK and a revolving door smoothly moves players between the two. Patriotism is absent and money is king. Much of the UK's infrastructure is now foreign owned.

Corporatism is the cousin of fascism and swims in the same filthy water. As long as people can't see to the bottom of the pond, people can pretend there are no nasties swimming below the surface even though we know how bad it smells.

Corporatist tentacles are strangling the UK and bleeding it dry. The democratic deficit is vast. If you try to challenge those interests, you hit a hard wall quickly. I have had personal experience of complaining to a regional electricity distribution company. They are a profit making regional monopoly, appear to be exempt from the Freedom of Information Act, have 'Crown Immunity' from any claim for damages suffered at their hands and take 25% of every consumer's electricity bill under a 'contract' that none of us will remember signing.

Welcome to corporate UK. If you can smell the stench of corruption, look somewhere between our political ruling elite and the corporations that now own our country.

That's a dystopian image but not far from the truth, I think.
It's going to be a lengthy struggle to escape the network of corporate entanglement - if it's even possible
We definitely need a new type of politician

So now you've seen how Mrs. Thatcher's Deregulation of the City led to the 2008 Credit Crunch, and thus on to Brexit.

Off you go to the Job Centre! No time to lose.

Out of the mouths of babes...

" No, Reginald - this is a knob. And kindly don't refer to Mr Johnson by that term again, if you please..." 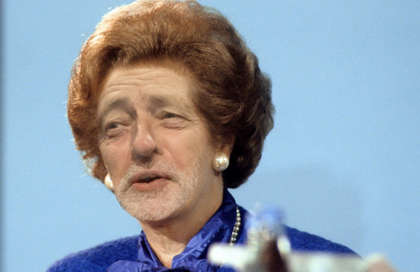 1.(especially of change or action) relating to or affecting the fundamental nature of something; far-reaching or thorough:

2.characterized by departure from tradition; innovative or progressive:

"the city is known for its radical approach to transport policy"

3.relating to the root of something, in particular.

1.a person who advocates thorough or complete political or social reform; a member of a political party or part of a party pursuing such aims.

To see ourselves as others see us

From "The Economist" yesterday:

"Corbynists want to reverse the 1980s"

Hmm, that editorial from 'The Economist' didn't impress at all, with its bias (suggesting that Thatcher’s destructive policies were “achievements”), its dreary repetition of Tory mythology about the 1970s (“consumed in strikes, stagflation and general discontent”), and even inaccuracies (the railways weren’t privatised in the 1980s but some time after Thatcher had been booted out by her own party).

I’m sure that what people in the 1980s wanted above all was a roof over their heads. After many had bought their council houses, interest rates rocketed to as high as 15% because of Nigel Lawson’s stupidity, and 300,000 people had their homes repossessed in four years under the Tories. The private homes they now have instead of council houses are mostly owned by private landlords who often charge exorbitant rents.

Did people get efficient trains? Ask some commuters who use Southern Rail, or ask those like Jeremy Corbyn who have had to sit on the floor of a Virgin train. Ask every rail user in Britain if they enjoy paying the highest fares in Europe. Did people get economic growth or stagnation? Thatcher presided over two self-inflicted recessions, and in the month before she left office both unemployment and inflation were higher than when she came in. House prices fell for the first time ever in peacetime and were lower in 1995 than they had been in 1988.

Did Thatcher “establish a new consensus”? Hardly! She was the most divisive PM in modern times and was still widely detested when she died nearly 23 years after leaving office. Yes, it can be argued that the New Labour governments of Blair and Brown did little more than soften the harshest excesses of Thatcher’s ‘neoliberal’ agenda and delay its cruellest implementation until after the Tories returned to office, but there was never a real consensus. The majority of voters have never (in modern times) supported the Tories, and every time they hold a conference you can guarantee a large volume of protesters (50,000 are expected in Manchester this weekend). As for so-called 'Corbynites', they don’t yearn for “bitter industrial disputes”, just a reversal of the erosion of living standards and workplace rights which have occurred under Tory governments.